When you ponder the enormity of the situation we’re in: the biggest mass extinction of life on Earth, bigger even than the extinction that saw the dinosaurs out, up against that, any one human’s actions can seem like trying to bail the Titanic with a soup spoon. Many people are trying though. For instance, many of the Zoo’s scientists and keepers are working to save amphibians. Amphibians face the triple threat of habitat destruction and pollution, climate change, and a devastating fungus-borne illness called amphibian chytrid.

The challenge of saving amphibian species is demanding all the creativity, resources, and hard work the conservation biology community can muster. Biologists, keepers, and volunteers are all working together to try to save amphibians. The National Zoo’s own effort, the Panama Amphibian Rescue and Conservation project, is led by Brian Gratwicke, a wildlife biologist at the Zoo. The team involves people from all over the Zoo community. Matt Evans, a biologist at the National Zoo’s Reptile Discovery Center, went down to Panama last year to help with the Smithsonian’s conservation efforts. Here we get his reflections on the efforts. 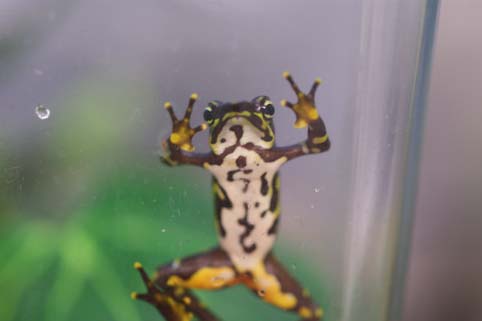 “Conservation groups are beginning to push for keeping animals in captivity in their range countries. This makes future reintroductions easier. You don’t want to expose them to North American diseases then send them back to Panama. They really need to be in a bio-secure area, and most facility don’t have a true “shower-in/shower-out” bio-secure facility. Keeping them in their range countries means both the country itself and the frogs benefit. 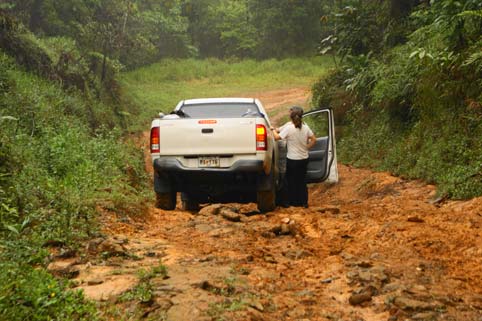 “So why Panama? You have this diverse area—especially eastern Panama and the Darien region—that hasn’t been affected by amphibian chtryid. It’s teeming with frogs and wildlife; a globally important place. Because of its location and its isolation, it’s almost impenetrable to humans. The wildlife there has been pretty protected. When chytrid moves in, it will devastate—absolutely devastate—the populations. We’re going in and saving the frogs we know are at the highest risk of extinction.”

“We were actually collecting frogs from the wild. We went to Cerro Brewster, which is a site just outside of Chagres National Park. It’s way out in the cloud forest area. We hiked out there in the middle of the wet season. The trucks which people usually take out there couldn’t go very far. 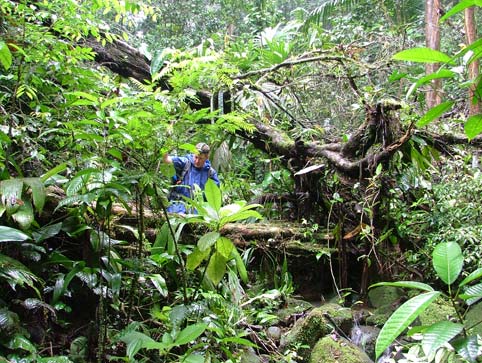 “It would pour rain for five or ten minutes. Then the sun comes out, and it gets very hot. Then the rain would come back again. It was like living in a shower. You were hot, then wet, then hot, then wet. We were hiking in mud up to our knees, walking up these mountains. It was like climbing up a hill of butter. There was nothing to hold onto. Things you’d normally hold onto—trees and branches—were covered with spines two inches long. You were slipping, sliding, and getting stuck in the mud the whole time. And we were carrying backpacks! The horses had a lot of gear (in fact, the horses carried the coolers with frogs in them back out), but we had to carry a lot of our own gear, too.”

“When you’re out in the jungle, it’s not easy to catch frogs. How you catch them depends on the species—some are active at night, some during the day. Usually, you start out down by the stream at night. You listen for calls. You look around with your headlamp and look for eye shine—the lenses of their eyes reflecting the beam of your headlamp back at you. You look on the undersides of leaves overhanging the stream, and sometimes in and around the stream itself. At night, they’re not trying to hide; they’re out calling and hunting.

“You have a series of empty plastic bags in your backpack, like fish bags. You wear gloves. We don’t use nets—it’s a really thick area and you don’t have a lot of gear. Just a backpack and a head lamp. Once you find the frog, you pick it up and put it in the bag with a few leaves or something to perch on, some air, and tie it off and put the bag back in your backpack.

“The group doesn’t always stay together—sometimes you go off towards where you hear a frog. I would get out to where I couldn’t see or hear anyone else. It’s pitch black and things are running down the trees at me, sticks falling on my head. This is an area where jaguars and peccaries have been seen, and there are all sorts of nighttime mammals that aren’t happy about me being there. We saw monkeys during the day. Once I turned around, and there was an eyelash viper [an extremely venomous snake] on a branch right behind me.”

Amphibians
Frogs, toads, salamanders and newts are vanishing at an unprecedented rate. Smithsonian scientists are working to save amphibians through projects focused in Panama and Appalachia.