Smithsonian Conservation Biology Institute (SCBI) scientists are working furiously to beat the bleaching clock and cryopreserve coral. But, they’ve run into a wall: bleaching is causing coral to produce poor-quality sperm and eggs. In turn, less are able to settle or survive the cryopreservation process. What could this mean for the future of coral reefs? SCBI scientist Mary Hagedorn explains in our Frozen Q&A.

Want science delivered straight to your inbox? Sign up for the Zoo’s e-newsletters.

How do you select which species to study and cryopreserve?

We often get asked that question. It is a combination of pragmatism and strategic thinking. It really depends on what species are available for us to study and the timing of the coral spawn. For example, on the Great Barrier Reef, there are 400 species of coral all spawning in one week. Practically, we currently do not have the trained professionals and the resources to conserve all 400 species, but we are planning for the future, so that might become a reality. The Great Barrier Reef is big, and in our conservation science we must think and plan big, as well. 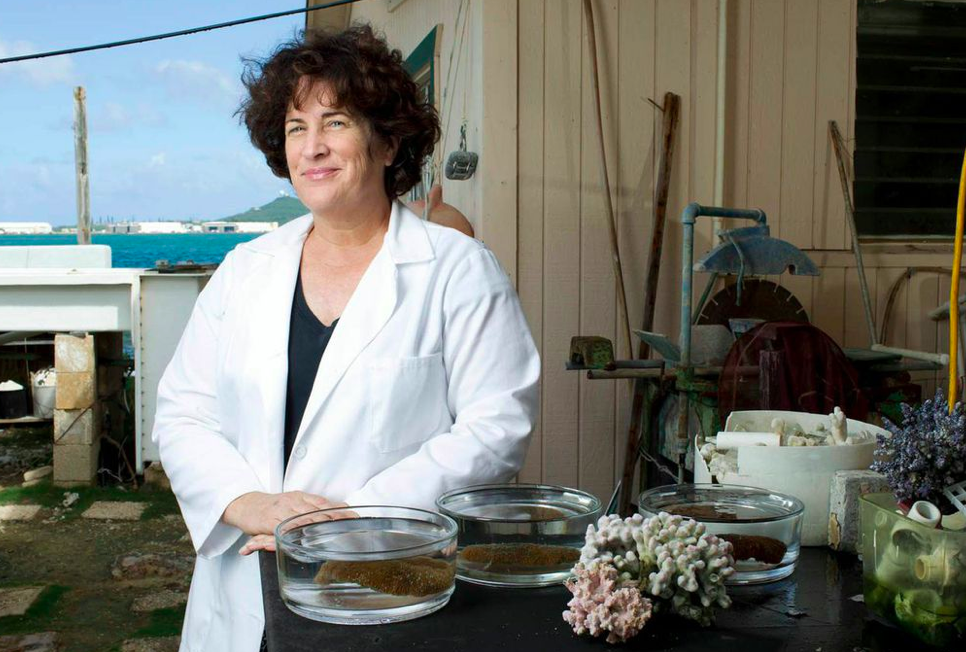 In the Caribbean, however, there are far fewer species than the Great Barrier Reef. So, we focus on the endangered corals, like staghorn (Acropora cervicornis) and elkhorn (Acropora palmata). In French Polynesia, we are focusing on saving the reef-building coral (Acroporids) since there are only 15 to 20 species. Our hope is that we can save as many of them as possible.

If we bank the sperm from 35 genetically distinct coral of a single species, we can save about 90 percent of that population's diversity! This process is doable, and we have already produced coral from sperm that we’ve cryopreserved. Because of this most recent global bleaching event, we have learned a lot about coral reproduction and how it responds negatively to cryopreservation after bleaching. Now, we hope to work ahead of disasters. That way, in the event another bleaching event in the future does occur and we lose genetic diversity in the wild, we would be able to reinvigorate those suffering populations using samples from our cryopreservation banks.

What does it mean when a coral has bleached?

Scientists call coral a holobiont; this means there are several organisms living together in harmony. For coral, that means the coral itself, the life-giving algae living within the coral and the bacteria that lives on the surface of the coral.

The algae uses the sun’s light to produce sugars for the coral and the algae also give the coral their rich colors. However, within the holobiont, the algae are also most susceptible to the ocean’s warming temperatures. If the water surrounding a coral is elevated, even as little as 1 degree centigrade above normal for that time period, then the algae becomes stressed. At this point, the symbiotic relationship between coral and algae breaks down, and the coral polyps expel the algae.

The algae can produce up to 90 percent of the coral’s food, therefore without them for a long period of time, the coral can starve. Without the color from the algae, the coral tissue is translucent but appears bone-white, or bleached. If the coral are unable to get their symbiotic algae back from the surrounding water within weeks, they die.

How does bleaching affect corals’ ability to reproduce naturally?

Without energy from the algae, bleached coral is not able to produce enough fat or the right kind of fat to enable the production or proper development of eggs and sperm.

In coral rearing, you must have very large numbers of larvae—think in the millions—to produce a single adult coral. So, starting the process with low numbers and inferior physiological health lessens the chance of the larvae developing into a mature adult.

We did have some successful coral larvae development and settling. Unfortunately, the overall numbers of corals that survived decreased from previously recorded years. 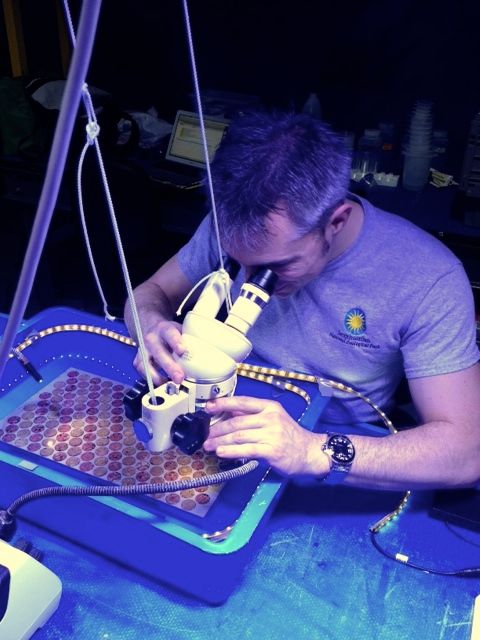 Why did you select these corals to study?

During 2014 and 2015, the world experienced a global beaching event. In this type of far-reaching event, no one species is necessarily more susceptible to beaching than others. However, certain individuals within a population may be more resistant to the rise in water temperatures.

The two species we studied were Fungia scutaria and Montipora capitate because we had some historical reproductive data (about 5 years’ worth) to reference and compare that data with what we found during the bleaching.

In many oceans, bleaching often occurs at a time when the new sperm and eggs are being developed in the coral polyp for the next year. In 2015, we noted that the Fungia scutaria eggs were smaller than average and had more mucus and particles present, and the sperm motility was almost half of what it normally was. However, we cannot definitively say that bleaching “caused” these events, because there can be a lot of natural variation. That is why having long-term reproductive data on coral populations is important for identifying potential causes for the trends we’re seeing.

How does bleaching affect the Smithsonian’s cryopreservation efforts?

Cryopreservation stresses a cell. So it must be in excellent physiological shape to survive the process well. Usually when we cryopreserve coral sperm, we prefer a sample's sperm motility to be 50 percent or greater, meaning that at least 50 percent of the cells are moving. Sperm motility is key for a successful fertilization. Starting the cryopreservation process with sub-optimal cells is only going to make the results worse.

For example, a sperm sample that starts out at 30 percent motility will wind up with only 10 or 15 percent motility once frozen and thawed. These remaining sperm have very little chance to successfully fertilize the fresh eggs.

In our study, we observe that many of the sperm samples for Fungia scutaria had less than 50 percent motility.

What’s next in the fight to save coral? 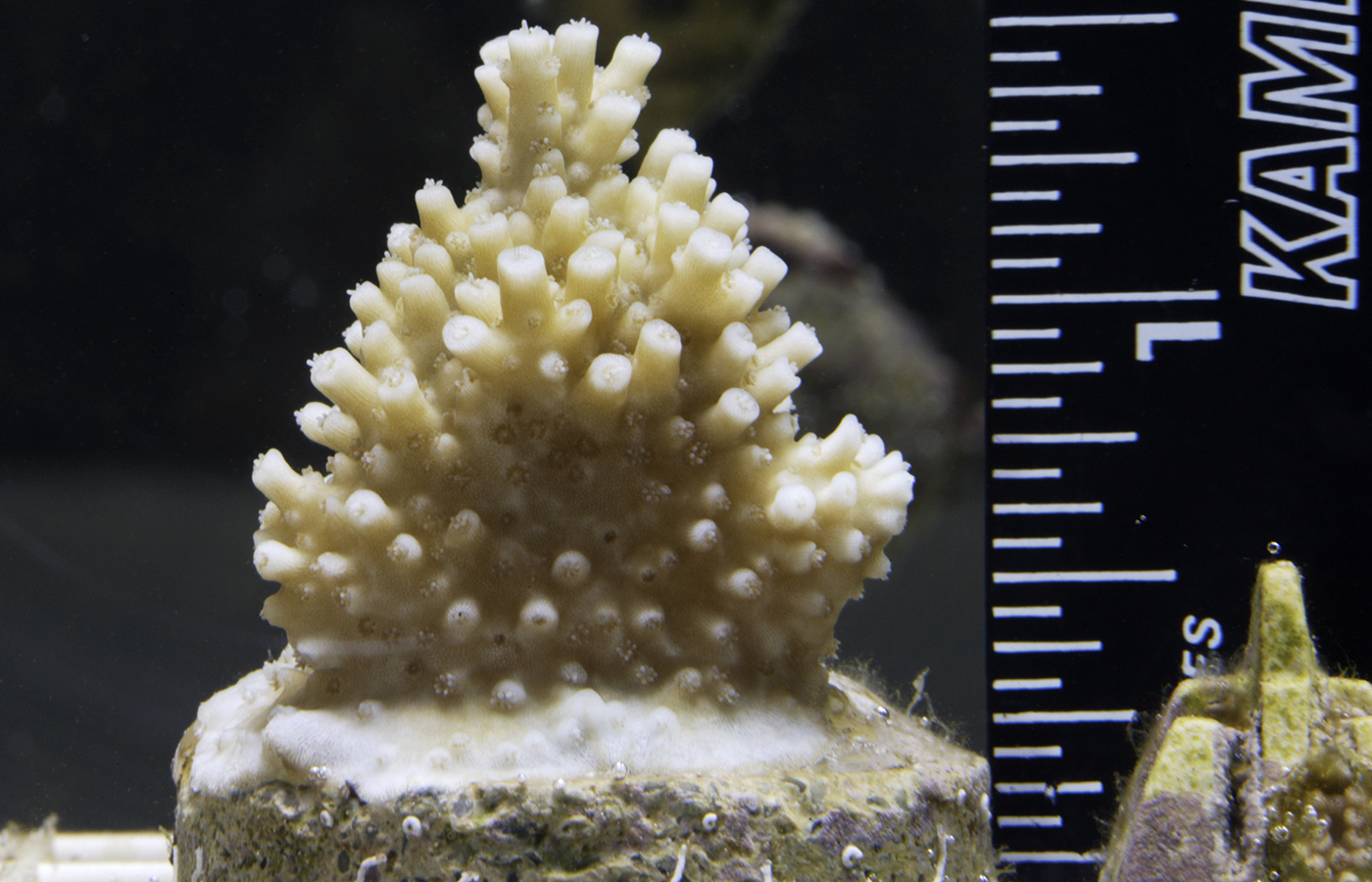 Because of the severe impact to the coral worldwide from bleaching, we are redoubling our efforts to work faster and smarter. Currently, we only have 12 species in our banks worldwide, but our goal in the next year is to double our holdings. In the next year we will have programs running on the Great Barrier Reef, French Polynesia, Hawaii and the Caribbean and we would like to develop one in the Middle East. We are also working on new technology to cryopreserve coral eggs, embryos and small fragments. These advances could be a game-changer in how fast we can conserve species.

A key factor to saving coral will be to train conservation professionals around the world in our techniques for freezing, banking, and thawing genetic materials. Enabling folks to conserve the coral in their own countries will help us preserve more species. We are also starting a new program in French Polynesia where hundreds of species spawn over 8 months, so we will have the opportunity to bank these species at a more measured pace.

These projects are critical to our global efforts to save corals and were made possible through the generous donations of the Paul M. Angell Foundation and the Roy and Patricia Disney Family Foundation among others.