Dr. Pierre Comizzoli is a reproductive cryobiologist at the Smithsonian Conservation Biology Institute. In this giant panda update he explains how the Zoo stores semen for endagered wildlife, which can be used for procedures like an artificial insemination.

The team of people at the Zoo who study and research giant panda reproduction includes keepers, veterinarians and scientists. I am one of the scientists on that team, specifically a reproductive cryobiologist. That means that I am a specialist in the preservation of sperm cells, eggs and gonadal tissues of endangered species at freezing temperatures.

By freezing semen samples of endangered species we preserve them for long periods of time and can suspend the life of sperm for decades. At the Zoo we store frozen semen of giant pandas and other species in the sperm bank. It is critical to create frozen sperm banks because the genes from deceased individuals can be used to produce offspring long after their death. This is really important for the sustainability of small populations and it is integrated with other conservation efforts. When we need the frozen sperm cells, we thaw them and then they can be used for assisted reproduction (like an artificial insemination). The Zoo's sperm bank contains more than 2,000 semen samples from more than 100 species. Sixty of those samples are giant panda semen from five males.

Our two pandas at the Zoo, Mei Xiang and Tian Tian, have never successfully bred on their own. For a critically endangered species like the giant panda ? that presents a challenge for conservation efforts, which is why we perform artificial inseminations on Mei Xiang when natural breeding does not occur.

I have been involved with performing giant panda artificial inseminations at the Zoo every year since 2004 ? except in 2006 when Mei Xiang was nursing Tai Shan. For some artificial inseminations we have used frozen sperm, which is stored in the Zoo's sperm bank.We only freeze semen from endangered species that is high-quality. The process for freezing samples is very specific to ensure that the samples are the highest quality possible. First, the semen has to be mixed with a solution that prevents pH variations, otherwise those variations would kill the small and fragile cells. Then, an 'anti-freeze' agent (glycerol) is added to the diluted semen to protect the cells before being exposed to decreasing temperatures. Ideally the semen is first cooled to 4?C, which is the temperature of a refrigerator, in a couple of hours. The cold semen suspension is then loaded in small plastic straws that hold less than 1/4mL of semen. All of the straws hold the same concentration of semen. Finally, the straws are exposed for several minutes to liquid nitrogen vapors at a temperature of about -100?C, before being plunged in the liquid nitrogen (-196?C).

We don't always have to use frozen sperm for giant panda artificial inseminations. We can use fresh samples, but only high-quality fresh semen. We know if fresh semen is high-quality based on how many moving spermatozoa are in the sample. After we collect a fresh semen sample, it has to be either used for an insemination or frozen immediately otherwise the sperm cells start to die (they stop moving). The forward motility of the sperm cells (which we can see using a microscope) is the best indicator of their quality and viability. 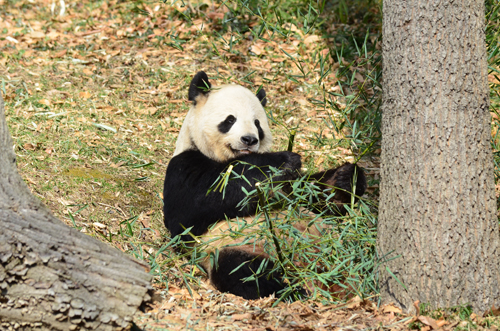