A "Butterfly Effect" On Population Modeling 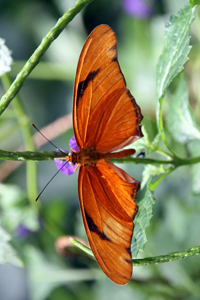 As any butterfly watcher knows, it is hard enough to spot a specific butterfly—it turns out that tracking a whole population of butterflies poses an even bigger challenge.

Scientists rarely count entire populations because of the difficulty, time, and resources such an endeavor demands. Instead, they typically count a small number of the population and use a model to estimate the rest. Specifically, they use transect surveys: a scientist moves along a path counting butterflies within a fixed distance of the transect. Scientists repeat these surveys are each location several times during the butterfly flight period to provide information on how the number of active butterflies changes over time. In a study published July 25 in Population Ecology, Justin Calabrese, a research ecologist from the Smithsonian Conservation Biology Institute’s Conservation Ecology Center, studied an increasingly used population model for analyzing butterfly transect count data. He found that in a wide range of situations, this model could yield heavily biased estimates of population size.

The focal butterfly population model is based on two key assumptions: that butterflies emerge as adults according to a bell-shaped curve during the season, and that they die at a constant rate. Calabrese noticed increasingly common reports in the butterfly literature suggesting that these assumptions often did not hold true. To address this issue, Calabrese developed a novel mathematical technique to determine how badly-biased population size estimates the model produced would become when these assumptions turned out to be false.. He found that even relatively small departures from these two core assumptions could lead to unreliable population size estimates, casting doubt on the robustness of the method—whether it was a good, appropriate and reliable method to use or not.

Significantly, Calabrese discovered that the transect count data typical of many butterfly monitoring programs does not reveal much useful, reliable information about butterfly population size and other parameters of interest to butterfly ecologists. While this news is discouraging to scientists and conservationists studying butterflies, understanding the limitations of butterfly monitoring data is necessary for improving our ability to monitor these populations. Population estimates are important for making conservation decisions. Without accurate population data, conservationsts cannot know if a species is truly threatened, or even where members of the population tend to be. Conservationists also have limited resources and need to know how to distribute their efforts across all the species in need.

It’s especially important to monitor butterfly populations, because recent studies indicate that they “mirror” ecosystem health; healthy butterfly populations tend to indicate healthy ecosystems. In particular, butterflies are accurate indicators of biodiversity and are sensitive to climate change. Research like Calabrese’s, though technical in nature, will lead to big changes in how at-risk populations—from butterflies up to buffalo—are monitored and how this information is used to make management decisions.