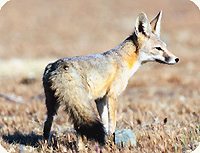 Traditionally, biologists have gathered basic information such as population density and survival rates of carnivores by trapping, drugging, and fitting radiocollars on restrained animals. We are developing a new, noninvasive method that uses trained dogs to find scats (feces) of carnivores followed by analyses of the carnivore DNA contained in them.

Our pilot work on kit foxes has shown that the trained dogs are highly effective and 100-percent accurate at finding kit fox scats. Furthermore, we can identify scats to the individual fox level using hypervariable nuclear DNA markers known as microsatellites. Thus, by periodically collecting fox scats and analyzing DNA, we can determine which individual foxes are present on a given area at a given time, thus acquiring the same data yielded by radiotelemetry.

However, before scientists accept the validity of this new noninvasive approach, its results must be compared to those obtained with radiotelemetry. We are using the San Joaquin kit fox as a model species to see if this new method can obtain data on population density, reproductive and survival rates, and other population parameters similar to those obtained by a collaborator using radiotelemetry. If the two methods yield similar results, this will facilitate the use of noninvasive DNA methods instead of the conventional invasive methods used by other scientists studying carnivores.

The rise of modern molecular genetics, with its rapid proliferation of new methods for isolating and analyzing DNA, is transforming many areas of evolutionary biology, behavioral ecology, and conservation biology. DNA can now be extracted from previously in unpromising sources such as old bones, museum specimens, hairs, and feces.

A variety of new molecular markers and analytical techniques can be used to gain insights into rates of evolution, relationships between species, boundaries between populations and species, gene flow and dispersal between populations, the extent of inbreeding and other fascinating topics such as mating systems, kinship, and paternity in wild populations.

Dr. Jesus E. Maldonado, a Research Geneticist at the Smithonian’s Genetic Program, has been using molecular genetic techniques to study such topics in a variety of mammalian species. The knowledge gained from these studies is often of both theoretical and practical interest, particularly when the species under study is endangered.

Katherine Ralls and her collaborators have been studying kit foxes since 1989. They have published on various topics including kit fox population dynamics; interactions between kit foxes and coyotes, and survey methods.