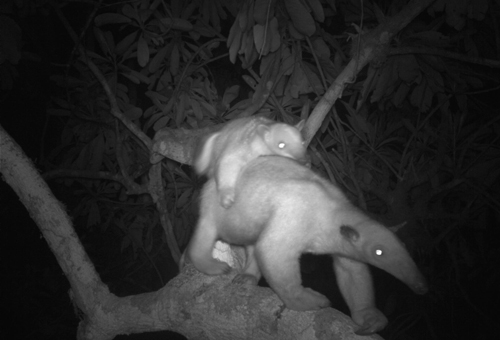 Camera traps are scientists’ eyes in the wild–and SCBI scientist Tremaine Gregory has been looking up. She was looking nearly 100 feet up in to the canopy of the Peruvian rainforest to be exact. No camera traps had ever been placed that high. They will unobtrusively capture candid photos of arboreal animals for an entire year.

And Gregory didn’t want to put just one camera trap in the canopy. She and her Peruvian colleague, Farah Carrasco, hoisted themselves up into the trees and placed 25 cameras across 13 canopy crossings over a natural gas pipeline in Peru—not only the highest, but also the largest arboreal camera trap study ever undertaken.

The results of that study, published in Methods in Ecology and Evolution, showed that camera traps are an effective way to study arboreal mammals, many of which are the least understood animals in the rainforest, for long periods of time. 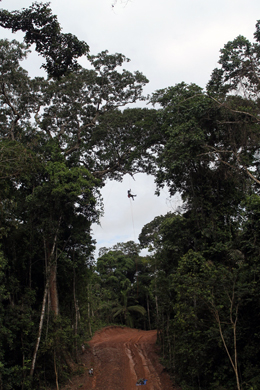 One of the big questions of the study was: can camera traps survive being in the tree canopy without being checked regularly? Scientists found that they can. The cameras stood up to the harsh constant elements of the tree canopy: wind, sun, rain, and even the occasional bite from an inquisitive creature. Halfway through the year-long study SCBI scientists had collected 8,239 photos of arboreal animals.

Arboreal camera trapping is beneficial for numerous reasons. The cameras allow scientists to observe nocturnal species that may be difficult to detect, as well as smaller species that are more likely to be missed. Camera traps also create the opportunity to document animal behavior and conditions, including pregnancy or health status, in close proximity. Gregory and her team noted in their study that the cameras seemed to cause “minimal to no stress or injury to animals . . . nor does [camera trapping] require training in trapping and animal handling.” In addition, the animals did not avoid the cameras, resulting in photographs giving an insightful view of these species in their natural environment. 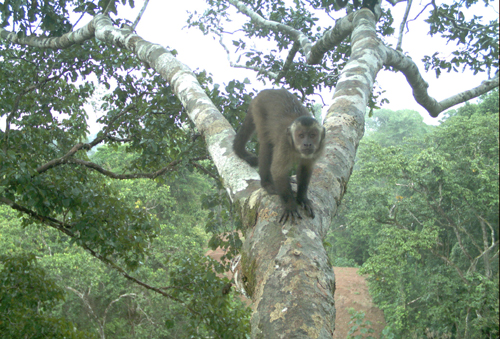 Although, the cameras were triggered more frequently by things other than animals, like moving leaves and branches, than cameras on the ground scientists found that trimming a five-foot (1.5 meter) zone of leaves in front of the cameras greatly helped reduce false triggers.

Now that scientists know long-term arboreal camera trap studies are feasible, they can continue to collecting information about the many species that call the tree canopy home. The study will contribute to part of a larger study investigating the potential for natural canopy bridges to prevent populations of arboreal animals from becoming isolated due to the presence of a natural gas pipeline.