An Elephant and Clouded Leopard Expert in Thailand 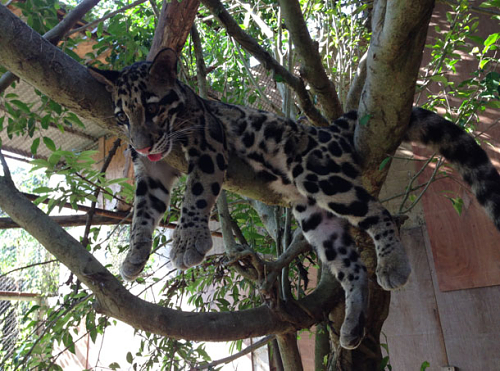 Dr. Janine Brown, a researcher with SCBI and an expert on reproductive hormones, is spending a month in Thailand, lending her expertise to clouded leopard and elephant projects there. Brown is a reproductive physiologist and one of the world’s leading experts on elephants. She has been studying elephants and clouded leopards for over two decades, working to advance science’s understand of the species and to save them from extinction.

Read about the trip in her own words:

I left for Thailand on November 19. My first stop was Bangkok, where I stayed for a couple of days. I gave a seminar at Chulalongkorn University on how to use hormone monitoring to help care for animals. They want to set up an endocrine laboratory for wildlife there (something we have at SCBI) and asked me for my guidance. Such a research laboratory would help conservation science in the region. 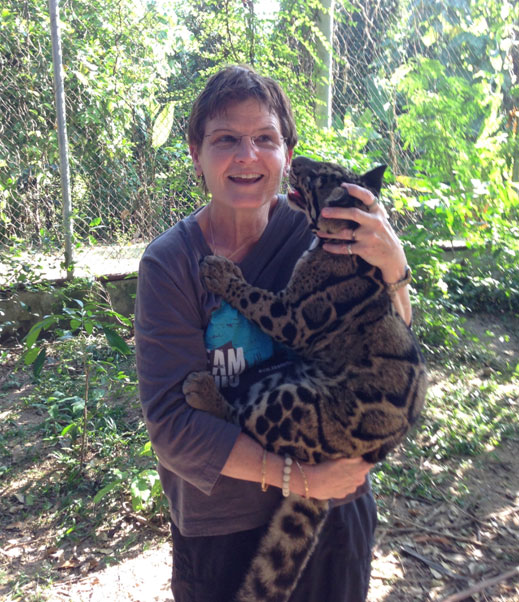 Next, I went out to Khao Khew Open Zoo, which is about an hour outside of Bangkok. That’s where the Clouded Leopard Breeding Program is. The breeding program is a consortium of organizations in the United States and Thailand, including the Smithsonian’s National Zoo, the Nashville Zoo, and Point Defiance Zoo in the US and the Zoological Park Organization and Khao Khew Open Zoo in Thailand. The program began in 2002, and since then more than 60 cubs have been born. Several of those cubs have come to the US from Thailand to bolster the zoo populations here.

Based on my research, we now know that clouded leopards need tall, spacious enclosures and lots of enrichment to thrive and reproduce successfully. Also, we’ve discovered that hand-reared cubs are much more likely to survive. Hand-rearing cubs, and interacting them as they get older, makes them especially easy to handle with less stress. Hand-reared cubs seem to enjoy interacting with their keepers and the occasional guest. 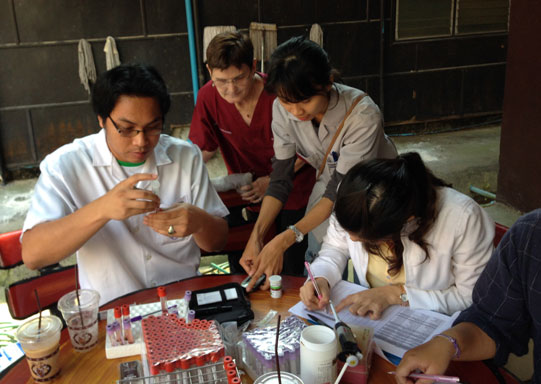 The second half of the trip involved working with veterinarians at the Elephant Research and Education Center, which is part of the Chiang Mai University. I’m an adjunct faculty member there, so I work with the vets and graduate students to study what factors affect the health, welfare, and reproduction of Thailand’s tourist camp elephants. There are more than 500 elephants in about 70 elephant camps within a couple of hours of Chiang Mai.

We are conducting surveys throughout northern Thailand to compare management strategies and see what methods are most successful for ensuring the health and welfare of the elephants and, as a result, reproduction. We are also collecting a vast array of physiological data from these camp elephants, including analyzing their serum chemistry, reproductive and stress hormones, body condition, health status, and physical fitness. 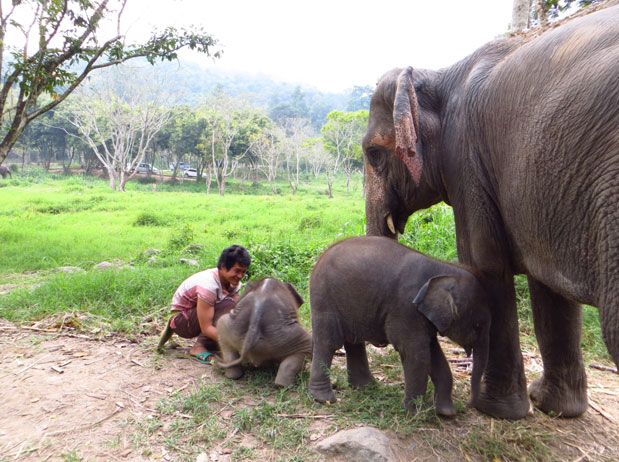 One of our model camps is Patara Elephant Camp, which consistently produces four to five baby elephants a year. We are interviewing the owner to unlock the secrets of how this camp is so successful, while so many others are not. Our goal is to help camps improve the welfare of all captive elephants and in turn, hopefully, reproduction so the populations will be self-sustaining (not unlike what I am trying to do for the population of elephants in zoos.)

I helped set up the lab at Chiang Mai University in 2004 and consider it like a sister lab to SCBI. The Chiang Mai endocrine lab also helps determining which female elephants are cycling normally and if they are pregnant. The lab was part of the team that successfully produced an elephant calf by AI in 2007. I am so proud!