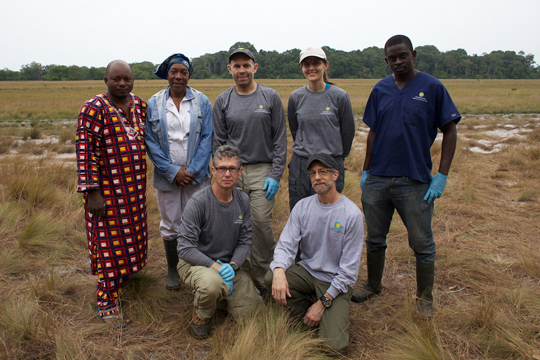 Along the southwest coast of Gabon lies a 32-kilometer strip (about 20 miles) of roadless savanna (less than five kilometers, or about three miles, at its widest) that is all but an island, abutting the Atlantic and sectioned from the mainland by three rivers. At first glance, it is an unlikely place to study disease emergence, which is what the USAID project I traveled with was working on, but it actually is an important case study for the effort.

Through the USAID–PREDICT project, Chris Whittier, DVM and PhD, known for his work in gorilla intervention and rescue, is now part of the Zoo’s Department of Wildlife Health Services. Whittier put together a team from the Zoo, of which I was a part, to assist with fieldwork. PREDICT is one of four USAID projects under its Emerging Pandemic Threats program, and it aims to identify emerging zoonotic pathogens before they threaten human populations. Zoonotic diseases are infectious diseases that are transmitted between humans and animals. Partners in the program focus their research on wild animal species in areas where interactions between humans and animals are expected to significantly increase, usually due to environmental changes, agriculture, or development. Changes of each kind are rapidly developing on this marginally protected strip of sandy grassland and isolated copses in southwest Gabon.

To the north of the Nyanga River (the northern border of the savanna) is the town of Gamba, the field headquarters and main holding facility of Shell-Gabon. It is a company town in the classic sense, an isolated center of prosperity that attracts the regional poor in search of income. Some 60 kilometers, or 37 miles, to the southeast of the Boumè-Boumè River (the southern border of the savanna) winds the National Road, the main artery of land travel for the eastern half of Gabon. There is no western artery of land travel this far south in the country, as the Loango and Moukalaka-Doudou National Parks block the way. Moukalaka-Doudou National Park’s southern border begins at the eastern perimeter of the savanna, marked by the narrow, tidal Mouambi River.

The only route from the National Road to Gamba is the savanna. Unpopulated and without roads, it has become an open “highway” for overloaded and hard-driven vehicles, mostly pickup trucks, transporting heaps of commerce—and people—north and back daily. To facilitate the inevitable, and preserve what it can of the savanna, the government of Gabon plans to build a permanent roadway connecting the National Road to the ferry landing at the Nyanga. The National Zoo's’s PREDICT fieldwork complements the biodiversity survey that is being conducted as part of the roadway environmental impact study.

Shell-Gabon and the Smithsonian Center for Conservation Education and Sustainability are partners in what is called the Gamba Biodiversity Program. Together they are responsible for the biodiversity survey, with Shell-Gabon underwriting the science (and much of the road as well, through corporate taxes).

It’s complicated. Suffice it to say that this is not safari Africa. This is an Africa where people haul themselves and their vehicles by rope across the Boumè-Boumè because there is no other way to continue. Bushmeat is hunted, both for personal consumption and for market, and animals throughout this area mostly keep their distance from humans.

Our camp was located close to midway along the savanna, easily within a kilometer of the Mouambi. It was built for multiple survey teams and the support staff of drivers, cooks, and the camp boss—its shade tarps framed with newly cut poles, its tents laid out beneath them with military neatness. Sodexo catered and supplied the camp, and the two chefs, who rotated solo weekly shifts, were without a doubt the hardest-working people present, beginning their day around 4 a.m. with the start of the generator and ending after the evening meal was cleaned up and preparations for the morning complete.

Camp was not otherwise luxurious. We slept on the ground (except wimps like me who used a two-inch foam mattress that lent placebo comfort). Our toilet was a 5-foot cubic pit spanned by two sets of poles narrowly gapped. Le bain (Gabon was colonized by the French) consisted of a trash can lid beaten flat and a bucket and a cup and cold spring water the color of tea, bailed or siphoned from a storage barrel. Clothing laundered in this water dried as if starched. We were thankfully in the dry season, but the dust seeped everywhere. The food was good and plentiful and the communal evening meal was a time to mend the hurts of the day and report the team’s activities and discuss plans for tomorrow.

It was important to know where a team intended to be and when it expected to return, should help be needed. Two Smithsonian teams were present during our stay—those studying macro-mammals and those studying micro-mammals. The macro-team did its research partly with camera traps, documenting the presence of large mammal species with natural light and/or infrared photography. One evening after business and the meal were concluded, Hadrien Vanthomme, macro-team leader, overall project coordinator, and camp diplomat extraordinaire, gave a laptop presentation of spectacular images culled from the many thousands that his previous study in the same area had taken. Three series of images remain particularly memorable: a daylight troop of chimpanzees whose curiosity and caution were focused by the camera; a night series of forest elephants that entered the frame and then backed out before proceeding, giving way to a grandfather cobra; a leopard, a species Vanthomme nearly had despaired of sighting, planting itself before the camera as if posing and then bounding back into the bush.

Chris Whittier and his crew formed the micro-team. He was most ably assisted by Peter Flowers, a vet tech at DWHS, whose dedication to precision and detail in every facet of the fieldwork inspired and challenged me. I joined the team in the field about a week after work had begun, with a few days overlap before Peter’s departure so that he had time to train me, whether or not I had time enough to learn. We also were joined briefly by the Zoo’s Judilee Marrow, who was as caring and capable with each of our catches as she was with her zoo patients.

Our research quarry consisted almost exclusively of forest rats and grass mice. (We trapped four shrews: two different species from three separate locations.) We caught the animals live in Sherman traps using vegetable bait (peanut butter and oats mix, date palm nuts, toasted coconut cubes). Our team worked on five sites, sequentially moving southward and across the Boumè-Boumè River. We established two groups of transects, consisting of one to six lines each, at each site, one group in a forested area, one on grassy plain. Each line was about 350 feet long with about 100 feet between lines. All captures occurred at night. We checked the traps by 9 a.m. each morning, while air temperatures were still mild.

We trapped four genera of rats: Hylomyscus, Praomys, Heimyscus, and three specimens of Malacomys, a big-eared, soft-furred, long-footed swamp rat. Apart from the last, the differences between genera, let alone species, were not all that obvious, despite repeated handling and close observation.

Of mice, we caught Mus musculoides species exclusively. We invariably trapped mice in the grass transects, while the rats, with one equivocal exception, were trapped in wooded areas. We anesthetized each rat specimen for processing with an intramuscular injection of a ketamine and medetomidine cocktail. The mice, ranging in size from a three-gram juvenile to a whopping 11-gram adult male, were all hand-restrained throughout the sample collection. We followed strict animal health and safety protocols for each procedure.

In essence we were looking for unknown viruses. We took two oral swabs from each rat, one for viral transport media and the other stored in a lysis buffer. An ear punch provided both a tissue sample for DNA analysis and a ready means to identify recaptures. We primarily drew blood samples from behind the eyes of the anesthetized rats, a technique whereby a very small capillary tube is inserted under an eye. A twist of the glass tube breaks small blood vessels on the surface of the eye socket and allows blood to collect. We drew one or two tubes of blood (a little more than 0.05 milliliters) depending on the rat’s weight. Mice, being altogether too small, were exempt from blood collection.

We combed every specimen for external parasites (many of which jumped ship the moment the body heat of their anesthetized host began to drop). When we could, we also collected fecal and urine samples. After we took body measurements, we photographed each specimen.

Finally, we implanted transponder chips in the anesthetized rats (for individual identification of recaptures in the next phases of study), gave them fluids subcutaneously, administered an anesthetic reversal, and allowed to recover.

Once upright, a specimen was placed back in its trap and, when fully alert, returned to the spot where it was captured, and then released.

The average processing time per rat specimen, not including recovery, was 30 to 45 minutes. Mice took 10 to 15 minutes. It is worth noting that the percentage of recaptures at each transect site increased day to day and that the final trappings at a site showed few, if any, new specimens. This was expected, as the number of days at each site was planned to yield a fairly exhaustive sample of the species population in the immediate area.

Three of our rat captures did not survive anesthesia, most likely due to pre-existing health issues that could not be foreseen. We necropsied these animals and preserved appropriate tissue and skeletal sample. At the lab in camp, we spun blood samples to separate plasma from whole blood cells. We froze plasma in tubes and mixed whole blood cells with a preservative before freezing them at -20 C. We also froze feces samples, and stored ear punches and parasites in alcohol. (That’s right, -20 C maintained on a equatorial savanna–a challenging logistic situation!)

I am grateful to Chris Whittier for his patience and seemingly boundless energy, to Peter for his tutelage, to Judilee Marrow for her gentleness, to Suzan Murray for her thoughtfulness in recommending me to Chris, to my teammates at Small Mammals who took up the slack in my absence and to the Gabonese we worked with, who all in all were quite warm and friendly. I am especially grateful for this experience of Africa, where I could forget for an entire month that this is an election year.

There are many Africas. One quick (and borrowed) story will encapsulate a sense of my brief experience with two of them. Chris told us of two Congolese vets, gorilla project colleagues who had traveled to the United States to hone their practical skills. They worked in a busy private clinic, assisting with dozens of cases a day for a month. Upon their return from the States, the vets were asked what they had learned. One of them replied, perhaps with measured irony, "We learned that time is money.” In Africa, time is what you do in the course of a day. The challenge of a lifetime is to reconcile the two.

This story was originally published in November/December 2012 issue of Between the Lions, Friends of the National Zoo’s volunteer newsletter.