Habitat for Rhinos and Other Herbivores in Kenya 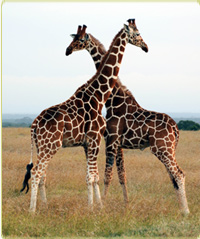 The Ol Pejeta Conservancy outside of Nanyuki, Kenya, is a beautiful patchwork of open grasslands, whistling thorn acacia savannas, Euclea scrub woodlands, and towering yellow fever tree forests along the banks of the Ewaso N’giro river. All varieties of wildlife are abundant, but perhaps Ol Pejeta’s most famous residents are its approximately 80 black rhinos, the largest single population in Kenya. Founded as Sweetwaters Game Reserve to provide a sanctuary for those very endangered rhinos in 1989, Ol Pejeta has expanded in the ensuing years to now encompass 120 square miles.

The combination of favorable habitat, year-round availability of water, and excellent security has allowed Ol Pejeta’s rhino population to flourish. Rhinos weren’t the only animals benefiting from the formidable perimeter fence and 24/7 security, however. Other large herbivores, such as elephants, have also increased. So many large herbivores concentrated in small areas has led to habitat degradation within protected reserves such as Ol Pejeta, which in turn has led researchers to notice a wide variability in the reproductive rates of local rhino populations over the past decade. 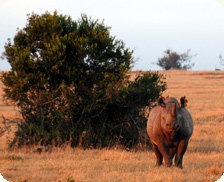 Historically, elephants migrated across the Laikipia Plateau to the pastoral communities of the Samburu district and beyond in the north of Kenya. As the quality of the habitat declined in the north due to drought and overgrazing and the poaching pressure increased, the elephants began staying year-round in the forests and savannas of Ol Pejeta and other similar conservancies in the Laikipia District. It quickly became apparent that these habitats can’t sustain year-round use by large numbers of elephants and still support the expansion of the endangered rhino population.

For more than ten years, volunteers from Earthwatch have helped monitor the populations of large herbivores in Ol Pejeta and their effects on the habitat. During our trip, we focused primarily on the effects of the herbivores on two species of trees: the evocatively named whistling thorn acacia and the yellow fever acacia. More than 50 research plots are measured twice a year to record tree growth, damage by herbivores and other natural factors, and seedling recruitment. 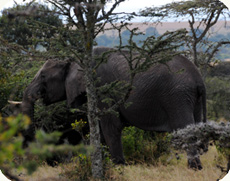 A typical morning would start with a bone-rattling drive across the conservancy to the general area of a plot followed by a short GPS-guided hike to a set of coordinates. The challenges of this work are apparent almost immediately. Ten years ago, those GPS coordinates corresponded to a tagged acacia tree, but in 2010 you'd be lucky to find anything at that location. Elephants, drought, and fire are among the causes of dead and missing trees.

Let’s assume, however, that you eventually find a tagged tree that corresponds to your GPS coordinates. Data collection is fairly straightforward. We recorded the height, diameter, damage, type of damage, probable identity of damager, and the presence of ants for every tagged tree. Safety tip: measure the diameter of the tree before your partner gives the trunk a stout thwack to wake up the ants. Whistling thorn acacias host some extremely aggressive ants as part of their defense against herbivores such as giraffes. Any disturbance to the trunk or branches, and hordes of ants rush out to defend their turf.

Once you complete data collection on one specimen it’s time to locate the next. Using compass bearings and distances from your data sheet, you set off to the last known location of the next tree. Sometimes you have to take six or seven bearings from the theoretical location of one missing tree after another until you find your next live specimen. The majority of the trees we managed to locate were moderately to heavily damaged by elephants. The main trunks were broken off or completely severed or the whole tree would be pushed over at the base. 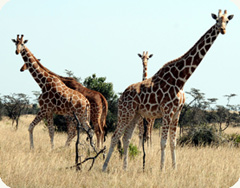 Damage caused by rhinos and giraffes was less severe. Although it slowed down the growth of the trees, it did not usually result in their death. The yellow fever acacia is a towering beauty that grows most abundantly along the rivers. The difference in growth and health of the yellow fever trees in the open preserve versus trees in an exclusion zone where elephants were fenced out was profound and depressing. Unfortunately, elephants find the bark of the yellow fever acacia to be highly palatable and will strip off large swaths of it, eventually girdling and killing the tree. Formidable thorns don’t seem to deter the elephants, but I'm fairly certain that every member of our team went home with some souvenirs still buried under their skin somewhere. After surveying an entire plot we would hike back to the nearest road, perhaps through a herd of giraffes or by the occasional ostrich, to wait for our ride.

The most tiring and exciting data-collection activity was the combination wildlife survey and elephant dung count. Two pairs of volunteers would set off on foot, with at least one trusty and absolutely indispensible armed guard, on six- to ten-kilometer transects across the preserve. One pair would record data on every mammal sighted within a kilometer of the transect, while the other pair recorded the GPS location of every pile of elephant dung within five meters of the transect. When these data are later combined with the comprehensive GIS habitat map of the conservancy, they tell the staff how the different species of wildlife are using the various habitats. 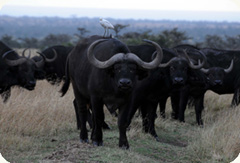 When encountering buffalo while walking a transect, it is standard protocol to go “off transect” and give the notoriously cranky animals a wide berth. On two occasions during our trip, buffalo took it upon themselves to charge us anyway, prompting our escorts to fire blanks toward the oncoming animals to turn them away. Visibility is poor when hiking through the Euclea woodland habitats, and it is not uncommon to come within ten to 20 meters of a buffalo or rhino before they see or hear you and retreat in a crash of brush.

Back at camp, facilities were basic but with their own wild charm. Red-rumped swallows rendered the light fixture above one of the bathroom sinks unusable by building a very large mud nest around it. A very dependable bat showed up every evening about 30 minutes after dusk to help rid the veranda of sausage flies. Late-night trips across the short grassy swath from your rondavel to the bathrooms required a flashlight to ensure that you didn’t bump into any zebras, waterbuck, or most importantly the half-blind bull elephant that made daily visits to the compound.

What can we do to accommodate both the elephants and the many other species that depend on the habitat that they are slowly demolishing? Unfortunately, there are no easy answers. Perhaps the best chance lies in improving security and habitat conditions throughout their historic northern range in the hopes that the great herds of elephants will feel safe to migrate again and allow the forests to recover in their absence.

This story was originally published in October 2010 issue of Between the Lions, Friends of the National Zoo’s volunteer newsletter.