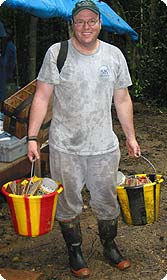 Something is squirming inside a white athletic sock marked with the number 16 and hanging from the belt of biology student Jessica Hollis. Standing in the deep woods of the Smithsonian National Zoological Park's 3,200-acre Conservation and Research Center in the Shenandoah Valley near Front Royal, Va., Hollis has four other socks hanging from her waist.

Gently, National Zoo Biologist William McShea reaches into sock 16 and pulls out a medium-size brown bird. "Wood thrush," he says matter-of-factly before turning the bird over and blowing on the speckled down of its belly. "Female with a brood patch. She's sitting on eggs somewhere nearby."

After the bird has been banded and its sex and species recorded, McShea opens his hand and the thrush disappears into the woods and back to her nest. A casual observer might never guess these biologists are actually studying white-tailed deer and their impact on the forests of the Shenandoah Valley.

Migratory bird populations in forests in the Eastern United States have been significantly stressed in recent years by too many deer eating forest plants that provide nesting cover.

The thrush was one of a number of birds captured during a recent survey conducted inside a 10-acre plot surrounded by an 8-foot-high fence erected in 1990 to keep deer out. McShea-who maintains six deer-free forest plots and six unfenced control plots in the Shenandoah Valley, all in forests within 20 miles of Front Royal-also is keeping track of the variety and number of plants and small mammals living inside these "oases."

After 14 years, the appearance of the foliage on the forest floor inside the fences is remarkably different from that just outside the fences. Inside, amid the trunks of mature trees, a new generation of young oak, redbud, ash, tulip poplar, hickory and dogwood stand as high as 8 feet. Amid these woody saplings, a lush variety of other native plants has sprung up, including wild yam, jack-in-the-pulpit, pink lady-slipper orchids, turk's cap lily, spice bush and Solomon's seal.

Because of its protective density, the number of migratory birds living in McShea's oases has doubled-Kentucky warblers, indigo buntings, worm-eating warblers, oven birds and flycatchers abound.

"Low-dwelling birds need cover. Otherwise, predators such as foxes and bobcats find their nests too easily," McShea says. "A dense understory also provides birds with seeds, insects and small animals, such as salamanders."

Outside the fences, there is little or no understory in which birds can hide. The ground is thinly covered with an invasive garlic mustard plant, which deer don't like. Nearly every other plant on the forest floor has fallen victim to the relentless appetite of white-tailed deer.

When McShea began his experiment in 1990, deer populations were just beginning to explode in the Eastern United States. Today, they have reached alarming numbers. Experts estimate there are now some 25 million to 30 million deer living in the United States, up from 500,000 a century ago.

While millions of suburbanites have watched deer decimate their neighborhood parks, vegetable gardens and backyard philodendron, McShea has been meticulously documenting, quantifying and analyzing the deer's impact on the forest ecosystems of the Shenandoah Valley. 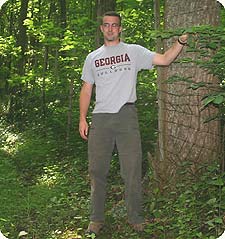 Biologist Chad Stewart stands just outside a fence that keeps deer out of a 10-acre forest study plot at the National Zoo's Conservation and Research Center. A new generation of young trees is thriving inside the fence. (Photo by John Barrat)

For governments, wildlife managers and others seeking answers to this complex problem, McShea's research may someday provide the guideposts and solutions to effective long-term deer control.

Today, however, there are no easy answers. A number of townships and communities in the East, despite the objections of animal-rights groups, have begun hiring sharpshooters to thin out deer herds.

"But once you begin shooting deer to thin out the herds, it must be done every year forever," McShea points out. "Deer populations rebound very quickly. A doe that usually has a single fawn each year, can have three the year after a herd has been thinned."

In addition, McShea says, in overpopulated situations, deer are always looking for new territory. "Thinning them out in one area creates a vacuum into which deer from neighboring areas swiftly move," he says.

Recently, McShea has been conducting studies with a new permanent contraceptive that shows promise for population control of deer, when used in conjunction with other management practices.

At the Conservation and Research Center, McShea has captured 40 female deer, injected them with the contraceptive and fitted 20 with radio collars. McShea and his assistants are now tracking the deer to monitor their health, movement and behavior and to see if they reproduce.

But with no solution for deer management on the horizon in the Eastern United States, dramatic change seems to be the destiny for many forested areas. Though deer are not the only cause of forest alteration, in national and state forests, where human development is not a factor, they are having a major impact.

"Today, deer are the landscape engineers of forest ecosystems of the Eastern United States," McShea says. "Their overabundance is shaping forest regeneration and, in turn, causing negative consequences for many native animals and plants whose presence we consider valuable."