Much Ado About Poo: Behind the Scenes at the Endocrine Laboratory 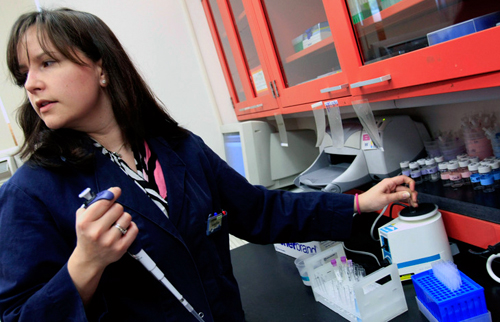 “No, we don’t know if the panda is pregnant.”

I say that sentence more than any other during panda breeding season. As a technician in Center for Species Survival’s endocrinology lab at the Smithsonian Conservation Biology Institute (SCBI) in Front Royal, Virginia,* it’s my job to monitor Mei Xiang’s reproductive hormones to help time introductions with Tian Tian for natural breeding and/or artificial inseminations (AI). From the moment the AI is complete (if not before) until Mei Xiang either gives birth or has finished denning up for the year, her potential pregnancy is pretty much all anyone talks to me about. More on pandas to follow.

The Endo Lab is involved in hormone research on a variety of endangered species, in addition to the giant panda. We can identify hormones such as estrogen and testosterone in samples collected from animals. We’ve analyzed samples collected from various zoos and in situ locations around the globe and from zoos from all over the U.S. For example, we have been able to tell a zoo when to introduce a pair of extremely endangered Indian rhinos for breeding by monitoring the female’s estrous cycles. In samples collected from wild animals, we can observe the relationship between testosterone and aggression in male chimpanzees (Sobolewski et al., 2012) and postulate whether female African elephants go through menopause by looking at the pattern of their progesterone over many years (Freeman et al., 2013). 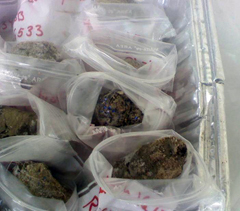 The majority of wildlife hormone research is non-invasive. Researchers in this field have become quite adept at finding and analyzing hormones in animal excrement, saliva and hair. To put this in perspective, if your doctor wanted to look at your hormone levels, she would take a blood sample and send it out to a lab. Other than most captive elephants, which are trained for blood draws from their highly vascular ears, generally species in zoos are not trained for frequent blood draws. Additionally, we often do long-term studies so we can determine how hormone levels change over time. If you tried to get a blood sample from a lion every day for a year, she’d probably try to get a blood sample or two from you in return. Alternatively, everybody poops. That’s right; poop is the bread-n-butter of this lab. Each sample is bagged individually, labeled, frozen and when the study is complete, they are overnighted to us. I’m sure our FedEx guy loves his route. He’s figured out what is in those shipments he drops off at our lab every day.

Your next logical question might be “How do you collect samples from the animals?”

In zoos, collecting feces is pretty easy, since it doesn’t really go anywhere. But what do you do if more than one animal lives in an enclosure? How do you tell whose poo belongs to who? We have found a variety of materials we can use to help us “mark” each animal. The marker is sprinkled on individual diets prior to feeding and generally, the next day, you look for that marker in the feces. We’ve used concentrated food dye and whole pieces of corn (think about it), but my favorite is glitter! 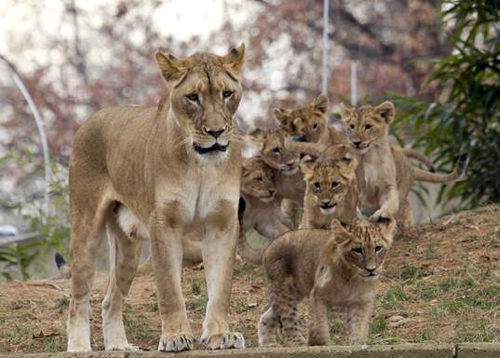 A great example of the use of glitter to help the keepers tell whose poop is whose are the lions at the Zoo. I’m currently finishing up my master’s thesis research on African lion reproductive biology, and the lions at the Zoo were part of the study. We had been collecting fecal samples from the adult lions for a few years and the keepers used rice, corn, and barley to identify Luke, Naba, and Shera fecals. A year after the cubs were born, I really wanted to add all seven of them to the study as well. After asking very politelyCraig and the lion keepers, especially Rebecca and Kristen, agreed to try it. They found seven different colors of glitter and managed to keep it all straight on TEN lions for an additional year.

Obtaining excrement samples from wild animals can be a bit trickier. We’ve actually managed to get hormone data from urine-soaked sand after studying wild meerkats. Instead of trying to catch urine before it was absorbed, we utilized the clumping action of the sand itself to capture the entire sample. We realized that sand acts similarly to kitty litter and we just needed a tiny scoop.

Several SCBI researchers participated in multiple studies looking at the stress hormones in wild and captive Asiatic black bears in China (see our published study on stress hormones in bile-farmed and rescued bears using feces and hair: Malcolm et al., 2013). A training facility in the U.S. prepped a scat-detecting dog using captive Asiatic black bear feces and she was able to find hundreds of fecal samples in the forests of Sichuan province. There’s even a Labrador retriever trained to find killer whale feces in the ocean - turns out, it floats. The dog stands on the bow of a boat and when he turns, the boat changes course. 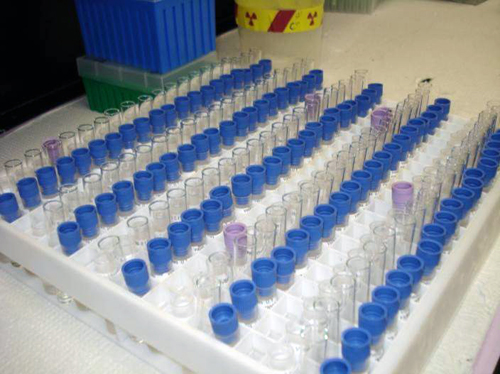 Before we can get hormone results from samples, most of them need to be processed. Urine isn’t too bad, you just need to dilute it in some buffer but fecals require more effort. Briefly:

We analyze samples using radioactivity or enzyme-linked immunoassays to obtain hormone concentration results. We can get data from a urine or serum sample within a few hours while it takes approximately two weeks to get data from fecal samples. Then data are compiled, stats are run, graphs are made and hypotheses are answered. 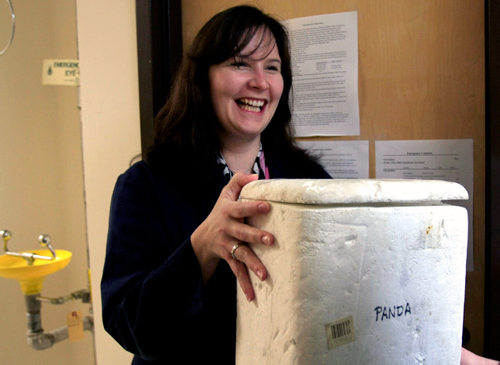 Now, back to the panda. As I’m sure you’ve heard, the giant panda is only fertile for 24 to72 hours a year. We need to pinpoint the best time to do intros and AIs, and we use Mei Xiang’s urinary hormones to help determine said time. The keepers are able to suck the urine off any hard substrate in her enclosure using a syringe. They send these samples to Front Royal weekly. When we determine that she is getting close to estrus, I mobilize everything I need into two suitcases and head to Department of Animal Health.

At that point, every time Mei urinates, I analyze the sample. I have to let you know that I swear this panda knows when something is up and I think she has a calendar of important dates memorized as well. When we really need data, she doesn’t go. Granted, she isn’t as interested in food and water when she gets close to estrus or the end of her reproductive season, but still. I’ve slept on the floor of the lab in an air mattress waiting for her to go to the bathroom. And look at her recent track record: she ovulated during President Obama’s 2009 inauguration weekend, this year was Easter weekend, and she finished two reproductive cycles right around the fourth of July. (However, Memphis wins the prize because their panda ovulated on Christmas one year.) 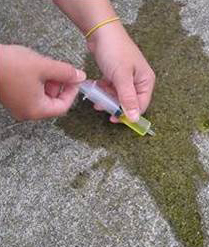 After Mei Xiang ovulates, we move into the waiting game of her luteal phase. Whether a panda is pregnant or not, after a female ovulates, her progesterone levels increase and remain elevated for at least 80 days, but the length will vary every breeding season. The shortest panda pregnancy on record was 83 days long and the longest was about 180.

When you look at the pattern of a luteal phase in a panda, you see a slight increase in progesterone right after ovulation, called the primary (1°) phase. This is the variable phase. The secondary (2°) portion of the luteal phase is marked by a steep increase in progesterone for 45 to 55 days before decreasing to baseline concentrations. We would expect to see Mei Xiang give birth by the time the progesterone hits baseline, which signifies the end of her reproductive season for the year. If she doesn’t give birth, we say that she had a non-pregnant luteal cycle and we’ll try again next year. There is no clear way to detect pregnancy in pandas yet.

Globally, panda researchers are trying to figure out how to determine whether a panda is pregnant or not. Humans, like pandas, spontaneously ovulate. If a woman does get pregnant, her progesterone remains elevated for the length of her pregnancy (pregnant luteal phase), nine months on average. If she does not get pregnant, her progesterone is elevated for about 21 days before it drops to baseline levels (non-pregnant luteal phase) and she will likely ovulate again within a week. 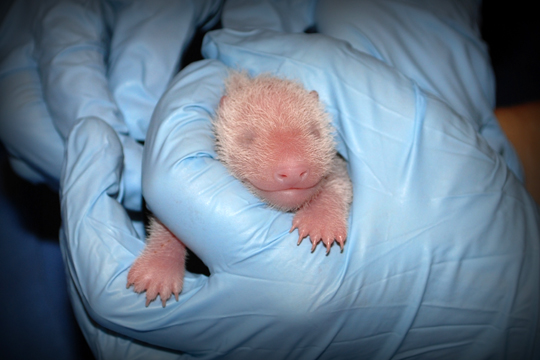 With pandas, the pattern of their progesterone (primary phase length: variable, secondary phase: 45 to 55 day range) is the same whether they are pregnant or not. A few techniques have been developed and work on other species but aren’t consistent enough to rely on in pandas, including infrared scanning and urinary inflammatory marker concentrations. I even bought some home pregnancy tests last year, just to see if we had missed something obvious. Sadly, they didn’t work, and I have to say it was surreal trip to the drug store for me. We have years of Mei Xiang urine banked in freezers in Front Royal, we have obtained samples from other zoos in the U.S. to increase our sample size of panda reproductive cycles , and we continue to work on trying to find a way to detect pregnancy in pandas. In summary, no we currently can’t tell if a panda is pregnant, but we’re working on it.

For 2013 though, we can safely say Mei Xiang was pregnant.

I’d like to leave you with a few gems from the Endo lab:

For those of you who are asking yourself, “What? Where? There’s a branch of the National Zoo in Virginia?” here’s a brief summary:

SCBI is headquartered at a 3,200 acre facility in Front Royal, Virginia, about an hour west of DC (just take I-66 to the end, really). Our staff is involved in ecosystem and endangered species research both at our facility and at several sites across the U.S. and around the world. We generally have 20 to 25 species at any given time; we are a breeding facility and some species are also part of on-going research projects. We have herds of species like Eld’s deer and Przewalski’s horses and we have more than 25 cheetahs at our cheetah breeding facility.

This story was originally published in January/February 2014 issue of Between the Lions, Friends of the National Zoo’s volunteer newsletter.

Wildlife Endocrinology
Studying hormones can help enhance the health and well-being of wildlife in zoos and in the natural world.