A New Home for Clouded Leopards 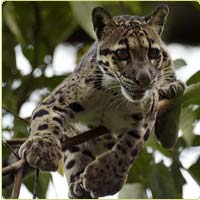 For clouded leopards, home is where the height is.

After more than 30 years of studying clouded leopards, Zoo scientists have solved many puzzles about this perplexing species, starting with the biggest: figuring out just what a clouded leopard wants out of its habitat.

It turns out that clouded leopards want a lot from their habitat; but the most important is height. Cats that live in tall enclosures are usually found at the very highest point they can reach. 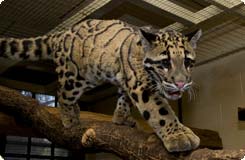 The National Zoo has been involved with clouded leopard conservation since 1978, back when they were the most puzzling and frustrating cat in the Zoo. Zoos were having trouble pairing and breeding the animals successfully. Clouded leopards in captivity were shy, reluctant exhibit animals; males frequently killed or wounded their mates; and reproduction was the greatest challenge.

“They are the most challenging cat there is,” Howard says. There isn’t another cat species that you can’t even put males and females together. A lot of zoos had given up because it was too difficult, and we didn’t have solutions to all the problems”

By studying the levels of cortisol, a stress hormone, in the feces of clouded leopards, scientists began to understand that clouded leopards are less stressed, and much more relaxed, when their enclosure includes a lot of variation in height. Naturally arboreal cats, with claws that allow them to walk head-first down the trunks of trees, they are most comfortable with lots of tall objects to climb on. The other keys to increasing their comfort level were to move them away from other large carnivores, including other great cats. 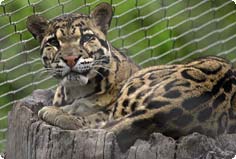 All of these are aspects of solving the same problem: how to exhibit and breed clouded leopards successfully in captivity. Over the years, the National Zoo's research facility in Front Royal, Virginia was able to create some pairs that successfully reproduced.  Between 1981 through 1993, more than 71 clouded leopard cubs were born at the Zoo’s Front Royal campus. However, even once the staff was able to get clouded leopards to produce cubs, they ran into another challenge. Almost half of these cubs did not live to be more than two weeks old. The cause of death in most causes was, presumed to be cannibalism by the mother.

Many questions still needed to be answered to improve clouded leopard breeding. In 2002, the National Zoo partnered with the Nashville Zoo and the Zoological Park Organization of Thailand to create the Thailand Clouded Leopard Consortium. Working with the Khao Kheow Open Zoo in Chonburi, Thailand, Howard and her team began to decode clouded leopards. This collaborative, international research program focused on two major challenges: how to successfully pair clouded leopards and how to improve cub survival.

The Consortium learned that for successful pairing, male cubs need to be introduced to their future mates by the time the males are six months old. They also have learned that hand-rearing cubs from birth is the best way to ensure that clouded leopards are comfortable around humans, which increases their breeding success later in life.

“We hand-raise them to calm them down, lower their stress, and socialize them to people,” Howard says. “That, and pairing males at six months, just changed their behavior completely.” Most importantly, the hand-reared males successfully bred and produced offspring. Since 2002, 49 cubs have been born in the Thailand program and 42 have survived. 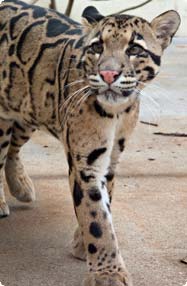 “The interior of the buildings is going to be higher than what we have at present,” Lang explains. “Since we know our cats spend an equal amount of time indoors and outdoors, it’s important to give them height in both enclosures.” The new facility also will include tall towers for outdoor climbing.

In addition to these taller enclosures, clouded leopard pairs will also have enhanced privacy. Each pair will have their own building, which will allow keepers and researchers to control the clouded leopard’s environments more closely.

“Any disturbance in the building used to be enough to upset the cats.” Lang says. ”With these individual buildings, each pair will have greater stability, and we’ll have greater control over their environment, especially during introductions and cub-rearing.”

Greater control over the environment means greater freedom to be innovative. Lang hopes that once the new facility opens in 2011, they might be able to allow a calm, hand-reared female to raise her cubs herself. Lang hopes for a female calm enough that when raising her cubs, she will allow keepers to interact with the cubs daily in hopes to produce calm cubs.