By Sara Hallager, Bird House Biologist at the National Zoo 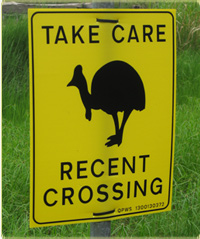 The southern, or double-wattled, cassowary is one of three species of cassowary and the third largest bird in the world. Endemic to New Guinea and northern Queensland, it is believed that fewer than 1,500 of these birds survive in Australia. Unnatural threats to their survival include car strikes, habitat loss and predation by dogs and feral pigs. Often called the rainforest gardener, cassowaries are important to the health of the Daintree Rainforest in Queensland, Australia. By consuming more than 230 species of fruits that are able to germinate only after passing through the cassowary digestive tract, cassowaries play a critical role in the growth and renewal of the Daintree. The cassowary is also vitally important to the culture and tradition of the Aboriginal people of Australia. It figures prominently in dance, storytelling and lore, and was historically an important food source. 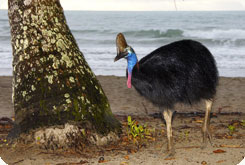 Working with cassowaries at the National Zoo for more than 20 years, I have developed a deep fondness for these birds although caring for them can be challenging. They are extremely suspicious of anything new or different and changes to their environment can take them weeks to adjust to. They are intelligent birds and although solitary by nature, the two females at the Zoo are frequently observed looking at each other through the fence (the aggressive nature of female cassowaries does not allow for keepers to house the birds together). Their large black-feathered body (60-80kg), the casque on the top of their head, their bright blue necks with two hanging red wattles, and their razor sharp inner toes, often cause visitors to remark that they look like a cross between a turkey and a dinosaur.

In April 2010, I had the opportunity to travel to Cairns, Queensland, to work with the Australian Rainforest Foundation (ARF) in its efforts to save the southern cassowary. My traveling companions were Nicole LaGreco, San Diego Zoo; Chad Comer, Blank Park Zoo; and Jason Watters, Brookfield Zoo. ARF is a not-for-profit organization dedicated to education, research and habitat rehabilitation for Australia’s rainforests. One of the goals of the Australian Rainforest Foundation is to bring together government, community groups, scientists, land managers, the corporate sector and private citizens from Australia and around the world to work cooperatively to save the endangered southern cassowary. 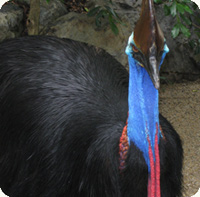 Under the working banner “Operation Big Bird,” ARF hopes to create a 250km wildlife corridor along Australia’s wet tropical rainforest coast in Queensland. This cassowary corridor will be a link between Cairns and the southern coastal town of Cardwell, where World Heritage listed rainforest habitat has been fragmented by farms, tourism resorts and urban development. More than 80 percent of cassowary prime habitat, (coastal lowland rainforest) has been cleared over the last 100 years.

I was privileged to see several cassowaries in the wild during my trip. All birds were sighted by the side of the road. On one occasion we spotted a large female eating breadfruit, and on two separate occasions we sighted a male with his offspring (like most ratites, it is the male that raises the chicks). 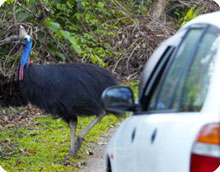 Sightings by the road are a common occurrence but often prove fatal for cassowaries. Each year, as many as ten birds are killed by cars. It is easy to see how this happens. On one occasion we observed a male with his six-month old chick standing by the side of the road. As we watched, dad took his chick to the middle of the road and foraged on some grit before moving off into the rainforest. Despite a high level of cassowary crossing signs, vehicles still speed down the narrow two lane roads. And because the roads often go through prime rainforest habitat, the lighting is dim. The black plumage of the adult cassowary blends in well and it's easy to see how birds are struck. I was also able to observe the fragmented habitat that makes up the cassowaries’ range.

The historical range of the cassowary is now reduced to three separate areas. The entire population is fragmented with the smaller isolated populations potentially genetically unhealthy. A key strategy of ARF’s Operation Big Bird is to ensure a safe and continuous habitat. This includes land acquisition for conservation and financial incentives to landowners to maintain and improve cassowary habitat on private land. ARF undertakes re-vegetation of the Daintree along the cassowary corridor in cooperation with local and State governments, conservation volunteers, and local landowners.

Our trip included several visits to zoos to meet colleagues who care for cassowaries in Australian zoos and who are working with ARF to save the cassowary. During our zoo visits, we held training classes for a project called Ethotrak. Ethotrak uses a Palm®-based program to collect behavioral data on animals in captivity. Data collected are used to improve husbandry and management of captive animals and can be used to benefit the conservation of wild populations. Pooling data from across institutions can help to increase sample sizes resulting in databases that are more informative and representative of species behavior. Ethotrak at the Zoo started with our two cassowaries in March 2010. Other zoos in the U.S. have since joined the study. The study has expanded to include cassowaries in the UK and soon Australia—making this the first international use of Ethotrak. Cassowary habitat is also home to 106 species of plants and 37 species of animals identified as threatened under both state and federal legislation.

Essential cassowary habitat in Australia's wet tropical rainforests incorporates 91 ecosystems of which 15 are listed as endangered and 23 are “of concern” under Queensland's Vegetation Management Act 1999. If the cassowary can be saved, so too will other plants and animals that share their habitat.

This story was originally published in July 2010 issue of Between the Lions, Friends of the National Zoo’s volunteer newsletter.