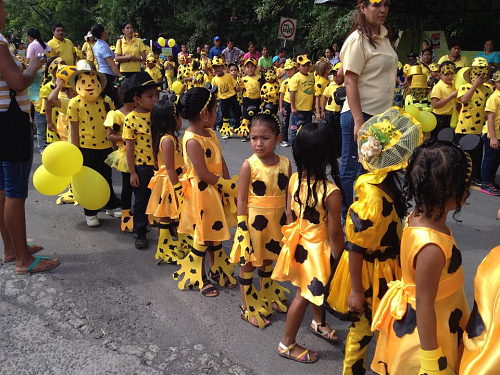 After more than five hard years of work and constituency-building, it felt like Panama was giving us a big warm hug. Once a year on August 14, an official holiday in Panama called Panamanian Golden Frog Day, our staff come together to help coordinate a week-long festival celebrating Panama’s flagship amphibian as a symbol for the environment. This year kicked off with a golden-frog themed national lottery ticket and our golden frog mascot (kindly played by Dara Wilson, a National Zoo volunteer) was featured at the official drawing broadcast on national television. This was followed by an annual parade in the picturesque town of El Valle de Anton. Each year, school kids dress up as golden frogs and parade through the city, along with the conservation staff of the El Valle Amphibian Conservation Center, celebrating “la rana dorada” which is endemic to this mountainous volcanic crater in the heart of Panama.

This year we also opened a brand-new frog exhibit at the Smithsonian Tropical Research Institute’s (STRI) Punta Culebra Nature Center situated in old world war II bunkers at the mouth of the Panama Canal. The popular new attraction features common frogs in Panama as well as some of the rare, endangered animals that are the focus of the Panama Amphibian Rescue and Conservation Project and includes cultural, scientific and conservation themes. The bilingual “Fabulous frogs of Panama” exhibit was opened by Dr. Matt Larsen, the new director of STRI and the Canadian Ambassador to Panama. The exhibit was made possible with financial support from the Canadian embassy, USAID, the National Science Foundation and Minera Panama. We wrapped up the week with frog-filled family fun days in Panama City and El Valle and a 10-kilometer trail race for golden frogs in the hills around the town of El Valle. 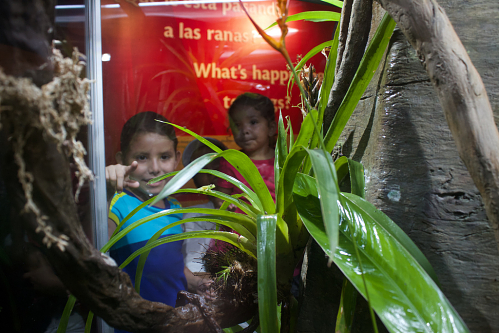 Hannah Arney, a Peace Corps volunteer with the project, developed a new informal curriculum linking fun educational activities to the exhibit and the Panamanian school’s curriculum. She also trained 70 school teachers to use it. The Panama Amphibian Rescue and Conservation Project is a consortium of zoos and aquariums, including the Cheyenne Mountain Zoo, the Houston Zoo, the Smithsonian Conservation Biology Institute, the Smithsonian Tropical Research Institute, and Zoo New England that has been working to build an amphibian ark for Panama’s frogs threatened by the deadly amphibian fungus. When not helping to coordinate the golden frog festival our dedicated staff focus on breeding disease-free frog populations in their amphibian arks, improving and expanding our facilities, heading into the jungle to collect at-risk frogs and searching for a cure for the deadly frog-killing fungus.

To find out more, to volunteer, or to donate, please visit www.amphibianrescue.org

Panama Amphibian Rescue and Conservation Project
Scientists have established assurance colonies of amphibians at risk of extinction across Panama, and are working to reduce the impact of amphibian chytrid fungus so they may one day be reintroduced to the wild.
Assisted Reproduction and Genome Resource Banking of Panamanian Golden Frogs
The Panamanian golden frog is extinct in the wild, but scientists are working to save this species by preserving and studying genetic material from at-risk populations.