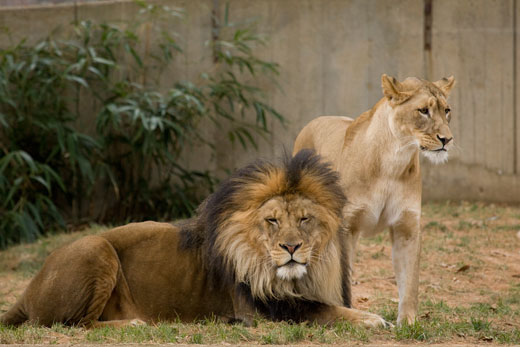 The International Union for Conservation of Nature’s Red List of threatened species, often considered the world authority on wildlife populations, lists African lions as vulnerable. “Vulnerable” is a classification that is not as extreme as “endangered,” “critically endangered” or “extinct,” but denotes that wild lion populations throughout the world are on the decline. As a result, it is important that healthy lion populations be managed in zoos as hedge against extinction.

Today there are several hundred lions living in zoos around the world. Under optimal conditions, lions breed well in zoos, and for decades they did. But this was not always the case.

About eight years ago, the lion population living in Association of Zoos and Aquariums (AZA) institutions wasn’t reproducing enough to sustain itself. Scientists feared that, unless something was done, the number of lions in zoos would drop dramatically. To find a solution, Smithsonian Conservation Biology Institute (SCBI) scientists Budhan Pukazhenthi and Janine Brown, and graduate student Sarah Putman helped the Lion Species Survival Plan (SSP) study lion reproduction. 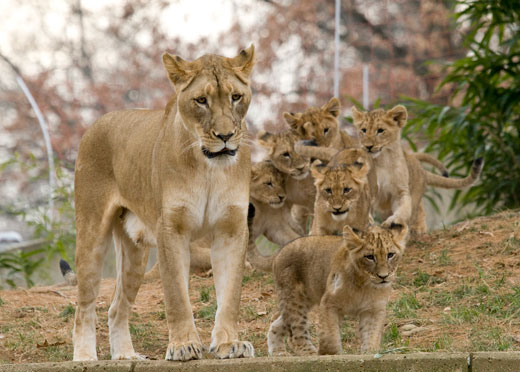 They began by monitoring the reproductive hormone cycles of 25 females and 20 males. They hoped this information would help them pinpoint why lions were no longer breeding in zoos. The team also tested the fertility of a select number lions; performing semen evaluations on the males and ultrasound exams of the females.

This research, particularly that conducted in the past four years, has given scientists a better understanding of the fundamental reproductive biology of this charismatic species. The results have been extremely valuable in caring for lions both at the National Zoo and at other AZA institutions. Specifically, insights into female reproductive cycles have enabled animal care staff to identify the best time to begin breeding introductions and predict when the cubs would be born. 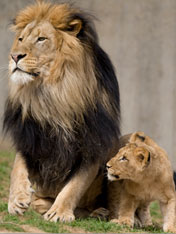 In addition to studying the physiology of the lions themselves, SCBI scientists surveyed keepers and animal care staff to find out how they managed their lions. Interestingly, they found that the major cause of poor reproduction in lions was the loss of knowledge as keepers and veterinarians retired or moved on to other animals.

At this point, the new management techniques have been so successful, that the Lions SSP has had to reduce the number of breeding recommendations to make sure it doesn’t end up with more lions than it can manage. As a result, the Lion SSP has reduced the number of breeding recommendations for animals within AZA institutions. To accommodate the goal of fewer births, but maintain pride structure, animal managers are increasingly interested in how to safely contracept young females. 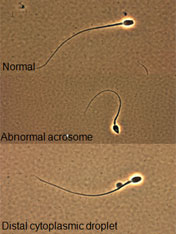 Unfortunately, so far none of the contraceptives currently available are entirely reliable. Although one of the drugs most commonly recommended, Deslorelin, does prevent pregnancies, its effects on the lion can last long after the implant is removed. Even once she’s no longer on the medication, a lion might not return to estrus (reproductive receptivity) or she might exhibit abnormal estrus cycles for several years. Scientists aren’t yet sure why this happens with some lions and not with others, and they don’t have a way to predict it. They haven’t yet found a way to contracept our lions without risking their future reproductive success. SCBI and the Lion SSP is working hard to understand this issue and to find ways to safely and effectively contracept lions living in zoos.

The team is also working to ensure the health of the lion population in the future. They have collected and frozen sperm belonging to five of the ten most genetically valuable males in the zoo population. They are training the next generation of animal care staff and reproductive biologist to ensure this vital research. 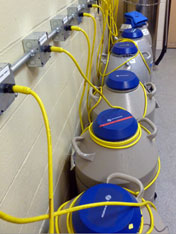 Currently, SCBI scientists are studying the hormonal and cellular mechanisms involved in keeping lions from returning to a normal reproductive cycle after contraception. The Lion SSP has designated SCBI as the reference laboratory for lion hormone analyses. The team continuously monitors as many as 15 male and 30 female lions, determining reproductive status (are the females cycling) or identifying reproductive problems (repeat pseudo-pregnancies and other unexplained breeding failures).

Capitalizing on our long term relationship with other AZA institutions exhibiting lions, SCBI scientists hope to partner with veterinarians and pathologists to investigate health issues caused by the contraceptive. These efforts prove a vital service to zoo professionals. Results from this research will help us to identify ways to control reproduction safely and effectively and ensure a healthy population of lions in zoos for the future.