The Scientist in the Woods: Jonathan Thompson

The Smithsonian Conservation Biology Institute has scientists all over the world, working to conserve all sorts of threatened ecosystems: grasslands in South America, jungles in Africa, cloud forests in Asia, coral reefs in the Pacific Ocean.

But not all endangered ecosystems are in far-flung, exotic locations—some are literally in our backyard.

Those are the ones Jonathan Thompson, research landscape ecologist at SCBI, studies.

“Some of my colleagues have field studies in Asia, or Africa,” Thompson says. “Mine happen to be in New England.” 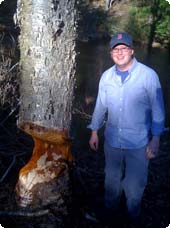 Thompson’s arrival at SCBI in October 2009 heralded something of a shift in the way SCBI conservation biologists study the world. Most of SCBI’s scientists focus on a species or class of animals. Many, indeed most, of these scientists also consider ecosystem-wide questions, but they do so by looking through the lens of one animal species. Thompson’s research is a bit different.

“I’m a forest person, not an animal person,” Thompson explains. “I bring the whole coupled human and natural ecosystem perspective instead of an individual-critter perspective.”

He currently studies forests comprised of millions of trees in the Northeastern United States. He looks at more than just trees—he studies the way trees make up an ecosystem, and how that ecosystem responds to acute disturbances and chronic change.

Of course, animals are an important part of the ecosystem that Thompson does incorporate into his research. He works with wildlife biologists to understand how animals fit into a forested landscape. Much of his research, however, focuses on an animal few other scientists at SCBI study: Homo sapiens.

The disturbances and changes affecting New England forests are those that face almost every forest all across the globe: a burgeoning human population and a warming climate. Part of what Thompson does is figure out ways to represent all the facets and moving parts of a forest ecosystem in mathematical simulation models. Scientists, policymakers, and landowners can use those models, according to Thompson, to “Ask ‘What if?’ questions.” They can look at how global climate change, land development, and the harvesting of resources (for instance, timber) will affect the composition and configuration of forested landscapes. They can see how the numbers and kinds of trees might change in response, and how those changes might affect the future of the forest itself.

Using his modeling, predicting, and assessing research, Thompson recently worked with a team of 20 leading forest scientists from across the northeast to produce a conservation vision called Wildlands and Woodlands: A Vision for the New England Landscape. In it, they lay out the challenges facing New England forests and suggest practical strategies for keeping 70 percent of New England—one of the most naturally heavily forested areas of the United States—permanently protected from de-forestation.

Thompson firmly believes that humans and forests can—and, in fact, need—to coexist successfully. He works with scientists from a wide range of fields to re-imagine forested landscapes so that they can support human livelihoods while still providing ecosystem services, such as clean water, clear air, and biodiversity.

“The big push for me is to keep forests in a forested state. I believe responsible forestry is part of the answer. The largest threat to forest comes from permanent conversion to other uses. So long as they stay as forest they provide a lot of resources—they can produce energy and timber, filter and store water, and provide vital habitat.”

Growing strong, large healthy forests may, in fact, be humanity’s best hope for the future of the planet, Thompson points out. Trees, which breathe in carbon dioxide and exhale oxygen, play a critical role in mitigating global climate change. Indeed, forests have absorbed more than a quarter of the carbon dioxide humans have emitted by burning fossil fuels.

“Conserving and managing forestland remains the only practical technology we have to remove large quantities of  carbon from the atmosphere.” Thompson says. “. “Trees really are the answer. Everything else [all other carbon sequestration systems], at least for now, remain newfangled technologies.”