What happens when a species is restored to its rightful place in the wild? In the case of the scimitar-horned oryx, the answer to that question has been nearly 30 years in the making. Next month, 25 oryx will be released to a large reserve in Chad, a country where they have been extinct in the wild since the mid-1980s. Each reintroduced oryx will sport a GPS collar that has been fitted and tested by Smithsonian Conservation Biology Institute scientists. In the Q&A below, scientists Mel Songer and Jared Stabach share how SCBI has prepared for this ambitious and historic recovery effort.

Why is the Smithsonian Conservation Biology Institute uniquely suited to the task of collaring and tracking oryx?

Our scientists have been tracking and analyzing animal movements around the globe for 15 years, from Asian elephants in Myanmar and Sri Lanka, to Przewalski's horses in China and Mongolia. We're experts at collecting data using GPS devices and in analyzing data to see how an animal interacts with its habitat.

In the next three to five years, between 200 and 500 oryx will be released to the reserve in Chad! These collars will help us monitor the individuals once they're released, starting with the first group in August 2016.

How do you test the collars? 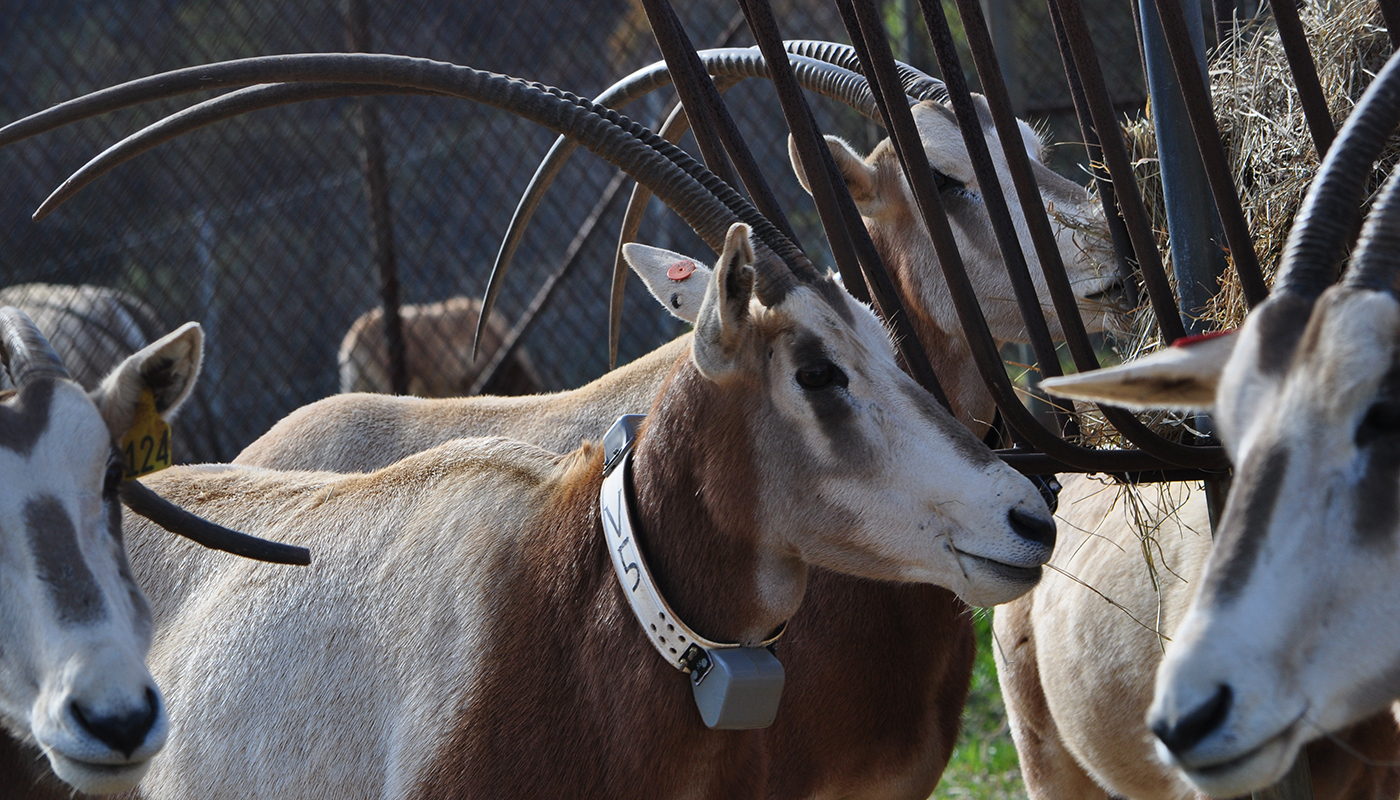 Over the past year, we tested the fit and function of the collars on our oryx herd at the Smithsonian Conservation Biology Institute in Front Royal, Virginia and at the Fossil Rim Wildlife Center in Glenrose, Texas. We also studied the hormonal and behavioral changes of oryx that were wearing them.

Aside from some initial discomfort from the fitting, the collars themselves had minor effects on the animals. But, we shared the information learned with the manufacturer, who was able to improve the fit. While we did not specifically test the effects of temperature or weather extremes, the collars have been extensively tested by the manufacturer for conditions akin to those in Chad.

This week, Jared Stabach is on his way to Chad to fit each animal with a collar with help from our project team, which includes our colleagues at the Environment Agency - Abu Dhabi, Fossil Rim Wildlife Center, and the Zoological Society of London.

What information can you learn from the collar? 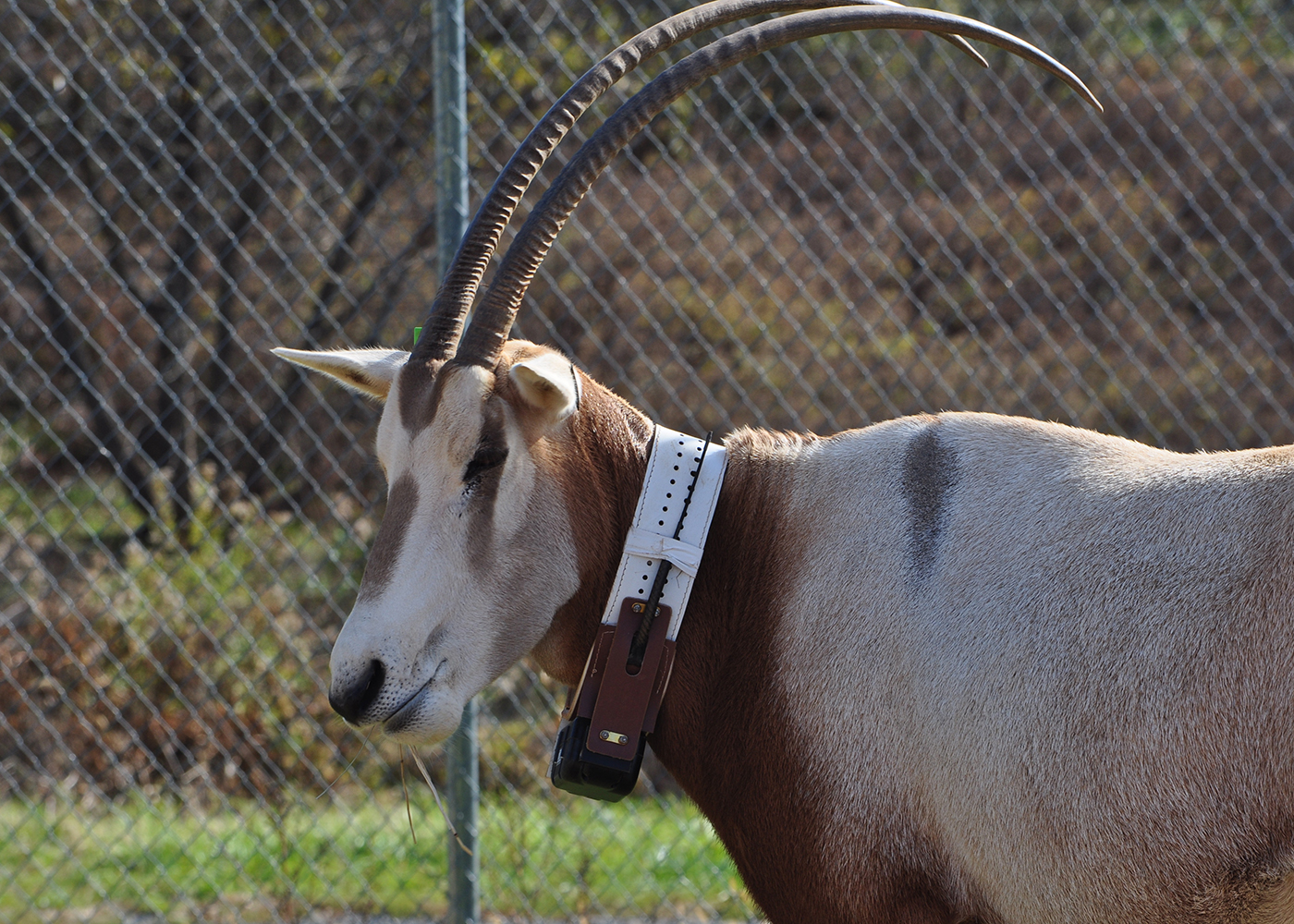 Essentially, the collars are very sophisticated GPS devices that can be programmed to turn on and off at specific times. Not only does this help save battery life, but also it enables us to see where on the map an animal travels at specific times. We're able to compare that movement with landmarks in the environment. Those could be anything—a shade tree, a water source, or a specific kind of vegetation they like to eat.

In addition to telling us the locations of the animals, the collars also report back what the temperature is and the animal's activity. There's an accelerometer built into the collar that can pinpoint an animal's movement in three directions. This means that if the animal moves its head left to right or up and down, the accelerometer will capture this information. That way, SCBI scientists can assess behaviors, including the amount of time an animal spends eating or avoiding predators.

For how long will the collars work?

At a minimum, the collars will work for two to three years. The length of time that each collar will work depends on how many GPS positions the collars will collect per day. Initially, we'll collect 24 positions per day—one per hour. Some collars, though, will be programed to collect fewer positions, which will help us collect data over a longer period, potentially even four to five years.

The oryx release will be staggered in three-month intervals over the next three to five years. In that time, SCBI will be tracking their movements, behavior and ecology. After that, our colleagues at the Sahara Conservation Fund and the Zoological Society of London will continue to monitor the oryx by taking field and aerial surveys periodically.