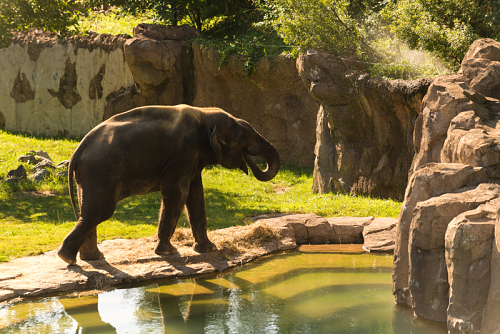 How do you keep one of the world’s largest land mammals happy? National Zoological Park’s Janine Brown and a team of collaborators have just completed a large-scale study of the what contributes to elephant wellbeing in human care.

Nicknamed the “Happy Elephant Project,” this groundbreaking three-year project was funded by a large grant from the Institute of Museum and Library Services. Its mission was to use solid science, including health and behavioral measures, to discover what is most important to keeping elephants happy and healthy.

Brown and her collaborators examined the size and type of elephants’ enclosures, their social environments (such as herd composition), how social conditions change through time, body condition (a measure of an elephant’s health), exercise and activity levels, and reproductive cycles, among other factors. They took thousands of serum samples to measure levels of thyroid, metabolic, and reproductive hormones.

The scope of the study is unprecedented in terms of the number of elephants studied (270) and the number of institutions involved (67), as well as the breadth of the variables studied. Although the scientists have finished collecting their data, Brown anticipates that it will take several more years to fully analyze this rich source of information. 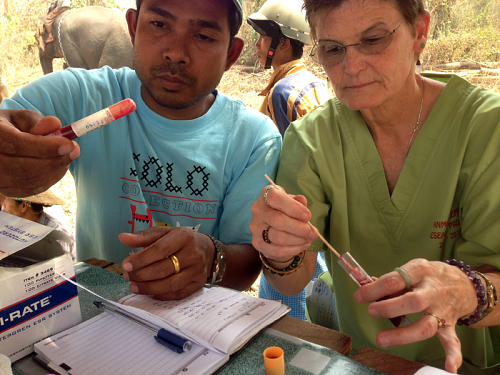 The main findings of the study are that variety is truly the spice of an elephant’s life! For example, the amount of space that elephants have is not as important in keeping elephants active as the variety of things included in that space, such as pools or hills. In addition, female elephants who lived in social groups with both males and females have more regular reproductive cycles than those who live with other females only. Elephants also benefit when they have a variety of enrichment items rather than the same types of enrichment every day. Brown hopes that these findings can help zoos throughout the world, as well as people in range countries (countries where wild elephants live), manage their populations of elephants in zoos and sanctuaries.

In addition to studying elephant welfare, Brown also works with zoos around the country to help their elephants reproduce. Zoos send samples of elephant feces, urine, or blood to her endocrine lab, where she or her technicians measure hormones to determine whether an elephant is pregnant or likely to become pregnant. Once an elephant becomes pregnant, gestation lasts for 20 to 22 months, so animal care teams have a long wait until an elephant calf makes an appearance. African elephants especially have had difficulty reproducing in human care, so learning more about their reproductive cycle will help elephant managers bring their population in zoos up to sustainable levels.

Brown enjoys working with the elephants because they are intelligent and empathic. She hopes that her research can help scientists in range countries better manage their elephant populations, which are decreasing, and that studies of elephants in human care will help inform our efforts to conserve this unique species.