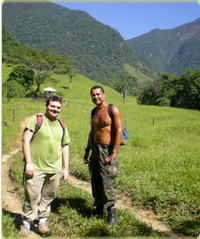 It’s February 24, 2010, and I am riding up and down Brazil 101, a major thoroughfare highway between Rio de Janeiro and other Brazilian cities to the north. It’s my 12th day in Brazil and I’ve come here to learn about golden lion tamarin conservation and see the monkeys in the only place they can be found in the wild, the Atlantic Forest in the state of Rio de Janeiro. I’m sitting in the passenger side of an old VW van emblazoned with the bright orange logo of the Associação Mico-Leão-Dourado (AMLD, the Golden Lion Tamarin Association). Every hundred feet or so, the driver pulls the van to the side of the road and a member of the Brazilian field team jumps out with the radio telemetry equipment. We’re all silent—as silent as we can be with trucks and tankers speeding past—listening for beeps from the receiver that picks up the signals emitted from the radio collars the golden lion tamarins (GLT) are wearing.

We continue up and down the same stretch of road for half an hour before the signal is picked up. The whole team—five of us today—hops out of the van, lugging our packs, water bottles, and gear. We step off the road across a drainage ditch and are suddenly in Brazil’s Atlantic Coastal Forest, a rainforest ecosystem with a high rate of endemism and only seven percent of the forest’s original footmark remains. One of the team members immediately starts climbing up the steep hill to the left. In just one minute, we have climbed 30 feet; I can look down through the leaves and see the traffic on BR101. 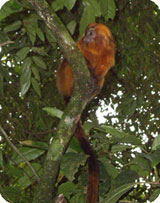 I turn around to find our elusive group of GLTs very excited to see us (or at least the bananas we’re carrying.) The team deposits the bananas in trees and stand back. The GLTs survey us, grab the bananas, and take off. It’s hard to believe that I’m watching descendents from reintroduced GLTs in Brazil when a week ago I was trekking through a blizzard to take care of the GLTs in Small Mammal House! Our goal had been to track these animals for the duration of the day and get data on their range of movement, but it’s taken us too long to find them. The team will come back to this site first thing tomorrow morning and try again. The AMLD field team has been monitoring the population of GLTs for over 20 years. They use this range-of-movement data to determine how much land a single group utilizes and compare this with other groups of GLTs.

Another day, we pull off of BR101 and head for a cow pasture towards a farm called Afetiva. That’s the challenge when working this area—most of the forests are fragmented and isolated, surrounded by cattle pasture. The team, four people this time, walks through the clearing until it eventually turns into forest. Today we are tasked with catching a family of GLTs to replace their radio collars. After a few minutes of setting live traps (like those you’d use for a squirrel) and baiting them with banana, Andreia, coordinator of the field team, whistles a sound that is nearly identical to a GLT long call, the vocalization used to locate other groups of GLTs and family members. Immediately the call is returned. Within ten minutes, three different GLT family groups are in the trees above us having an encounter—calling at each other trying to sort out whose territory they’re in and who gets to claim the bananas. The tamarins are so quick to appear at this site that ecotours given by AMLD are often brought here.

Finally, two of the groups clear out and the third descends from the trees to take a closer look at the live traps. The banana is too much of a lure for two of them and they are soon safely trapped and enjoying their treats. The team then transports them back down 101 to the AMLD headquarters. The GLTs are taken to the lab where they are anesthetized, and the measurements begin: body length, tail length, length of facial features and teeth, and weight are all recorded. The radio collar had fallen off another animal in this group, so the first GLT processed is given a new collar. Both GLTs also receive a permanent dye mark. Each GLT group has a unique combination of dye spots on their body. Additionally every GLT in a group receives a unique tail dye based on four areas (top, upper middle, lower middle, and bottom.) The team can then visually track every GLT in the forest and can tell if an individual switches groups or starts its own. The entire process from anesthetization to measuring to dye marks takes less than ten minutes. Being able to monitor these endangered monkeys is a critical component to saving this species. The team’s work began when there were as few as 200 GLTs in the wild in the 1970s; there are nearly 1,600 in the wild currently.

Once the anesthesia wears off, we head back to Afetiva. The GLTs are wide awake at this point and are vocalizing back and forth to each other. Once we’re back in their group’s range, they are released. We get a few more glimpses through the leaves of bright orange streaks headed towards their group’s long calls. We return to Afetiva the next two days in order to trap animals in the other two groups we had seen earlier that morning. 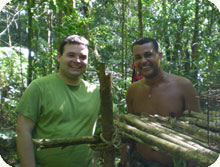 After attempting to track tamarins that are descendents of reintroduced animals, three of us (Nelson, assistant coordinator of the Brazilian field team, Jennifer Mickelberg, a National Zoo researcher studying GLTs, and myself) journey into the Pirineus Mountains to find some wild monkeys. There are still some areas where the exact numbers of GLTs are unknown—and this is one of them. We turn off the highway and drive for an hour over small, winding dirt roads. We’re finally met with a barbed wire fence, and we hop out of the van, grab our gear, and start what promises to be a real hike. We start climbing through an old growth forest; the vegetation here is denser and larger than anything I’ve experienced so far. We jump across streams, follow cow paths, and scramble over boulders until we’ve finally made it to a platform site that the team has been baiting hoping that they will lure the wild GLTs near.

The hike took close to two hours, and it’s well over 90 degrees—we’re all soaked and exhausted. Luckily, Nelson pushes us a little farther up the trail to a huge waterfall and lagoon. We all rush to the freezing spring water and cool off before we make the long journey back to the van. Although we covered the most distance today, it was my first day not to see any GLTs in the wild. Just as we start unloading our gear into the van, we hear a wild GLT call from the distance—a last-minute reminder that even though GLT conservation is considered one of the most successful conservation programs, there are still a lot of unknowns out in the forest.

If you would like to find more information about GLTs, check out the golden lion tamarin page.

This story was originally published in May 2010 issue of Between the Lions, Friends of the National Zoo’s volunteer newsletter.