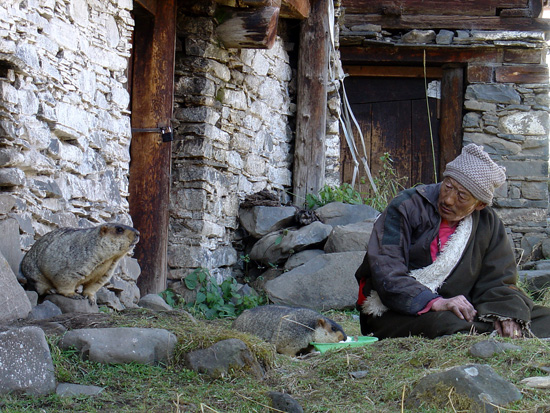 Scientists working to promote conservation in cultures around the globe may have an ally closer than they realize. A new study from the Tibetan region of China suggests that traditional religions have real on-the-ground benefits for local biodiversity—in other words, that non-scientific motivations can lead to scientifically valuable actions.

SCBI scientists found the most conservation behavior in villages whose inhabitants held religious traditions in high regard and the least in villages lacking both a strong investment in traditional beliefs and high-profile government-run science-based conservation programs. Moreover, they found that villages that were more invested in traditional religion were surrounded by more birds of more species than less religious villages.

“The issue in many developing countries is that you have indigenous people with a certain knowledge of the environment,” said William McShea, a biologist at the Smithsonian Conservation Biology Institute and member of the research team. “A lot of times when you get development, they lose that knowledge, or at least how much importance they place on it.”

The study, which appears in the journal Biological Conservation, paired surveys of villagers with bird count observations in the village’s surroundings. The survey was designed to evaluate villagers’ adherence to traditional beliefs, their understanding of ecology, and whether this understanding was due to religion, science-based government programs, or both. Then, bird counts in the area surrounding each village served as a biodiversity measure.

“The government line is great in terms of why we want to protect the environment,” McShea said, “but our finding was that that doesn’t work nearly as well. Governments, agencies, should not be trying to replace traditional knowledge with scientific knowledge. You want to supplement.”

There is certainly enough space for religion and government to coexist. “We’re never going to have enough reserves to cover the whole area,” McShea said. “We need to keep religious taboos in place.”

The article, “Does science replace traditions? Correlates between traditional Tibetan culture and local bird diversity in Southwest China,” was co-authored by Xiaoli Shen and William J. McShea of the Smithsonian Conservation Biology Institute, Sheng Li and Zhi Lu of Peking University, and Nyima Chen and Shengzhi Li of the Shan Shui Conservation Center in Beijing.