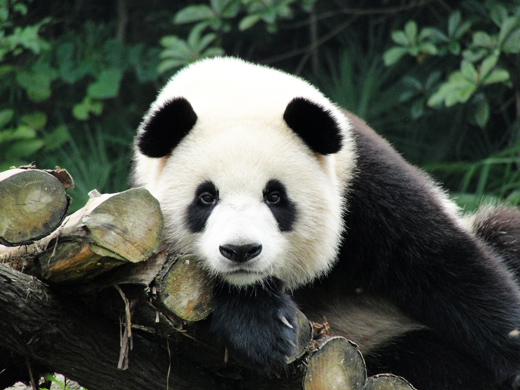 This past October I had an opportunity to travel to Dujiangyan, China with Dr. David Kersey from Western University. I was there to assist him with setting up fecal processing and endocrine laboratories at the China Centre for Research and Conservation of the Giant Panda (CCRCGP) Dujiangyan base. Our goal was to set up the lab equipment and the assays and make sure the CCRCGP staff was trained in all necessary procedures. It was important that the staff understand the theory and mechanics of these processes. As you might imagine this was a lot to accomplish in three short weeks!

We were welcomed by the Director of Research at CCRCGP, Huang Yan, and other staff members with whom we would be working. Our first week was devoted to lab organization and preparing giant panda fecal samples for freeze drying, which is the first step in fecal processing and takes multiple days to complete. While we were waiting for those samples, Dr. Kersey gave a lecture on assay theory. One of the staff members, Mr. Lee, volunteered as a translator to ensure everyone could clearly understand the topics discussed. 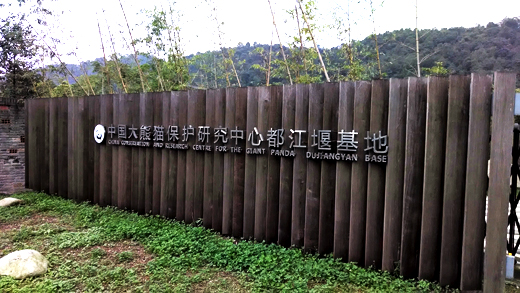 During our first week, we took a tour of the CCRCGP Dujiangyan base. Dujiangyan is a new facility with approximately 20 giant pandas and some red pandas on site. Dr. Kersey had previously worked with some of the giant pandas there including Tai Shan, the first giant panda that was born at the Smithsonian's National Zoo using artificial insemination. The enclosures were inviting and made observing the animals relatively easy. The campus grounds were very beautiful and of course I took copious amounts of panda pictures! We also found some unexpected friends such as a giant cane toad and a large praying mantis.

While the majority of the trip was spent at the centre, Dr. Kersey and I had some free time to explore Dujiangyan. We visited traditional buildings, food carts, and various shops. We also toured the Dujiangyan Irrigation System (DIS). The DIS is an UNESCO World Heritage Site built in 256 B.C. to irrigate land while preventing devastating floods. Quite impressively, it is still in use today and irrigates over 5,300 square kilometers. While exploring the parks associated with the DIS, we hiked to some beautiful temples and were rewarded with some spectacular views of the city. 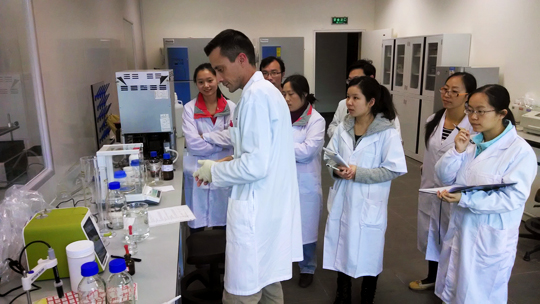 Dr. Kersey worked with two technicians in the endocrine (EIA) lab getting the various hormone assays ready. While Dr. Kersey was in the EIA lab, I was responsible for leading the training session. All the trainees were exceptionally nice and eager to learn. We began our week by preparing the newly freeze-dried samples for extraction. The fecal process begins with the least glamorous (or most fun, depending who you ask!) part of hormone profiling: turning the fecal into a fine powder. The benefit of working with giant panda fecals is that they are not too pungent. Everyone caught on to the procedures quickly and, as one might imagine when crushing animal feces, good-natured laughs were abundant. By the end of the week, the trainees and I had started the extraction process on our samples. 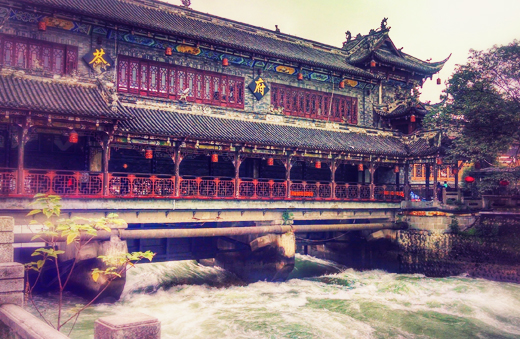 Our last week in the lab, the trainees and I finished our extraction and ran some of the samples on the new estrogen assay that Dr. Kersey and the two technicians set up. Despite the fact that some of the trainees had never performed an assay before, I was quite impressed with our results! As Dr. Kersey and the technicians finished tweaking assays in the lab, I led the trainees through a mini lecture on data analysis as well as a brief review of the processes we had completed throughout the training course. As our last day in Dujiangyan came to a close, we said goodbye to our new friends feeling confident that they were off to a great start in the laboratory.

Our final day in China was spent in Chengdu visiting Dr. Kersey’s friends at the Chengdu Research Base of Giant Panda Breeding. As we walked around I almost forgot we were right outside a large city because of all the plants and trees throughout the base; it was absolutely gorgeous.

Overall, this was a great experience filled with fantastic people, delicious food, and education. It helped me grow as a scientist professionally and personally, and I am so appreciative of Dr. Kersey for being a great mentor.