By Erin Stromberg, Great Ape Keeper at the National Zoo

Late last year (2011) I got a phone call asking if I would like to go to Indonesia. Of course I accepted, and I am proud that this experience was made in part by one of my research demonstration with the orangutans at Think Tank.

These demonstrations have allowed me the opportunity to impress people with the extreme cognitive abilities of orangutans, as well as promote a conservation message for the species. I’m a little better known around the park due to the Think Tank demonstrations as they are often used for upper management tours. Hence my name was mentioned as someone that might be interested in travelling to Indonesia to learn more about orangutans in their natural habitat, including the conservation needs surrounding their endangerment.

I would be joining Steve Monfort (Director, SCBI), Francisco Dallmeier (Head, SCBI’s Center for Conservation Education and Sustainability), and Peter Leimgruber (Research Scientist, SCBI’s Conservation Ecology Center) on a trip to Indonesia to meet with non-government organizations, local government, and private sector representatives to learn more about the issues surrounding the conservation of many species, including orangutans, tigers, and elephants. 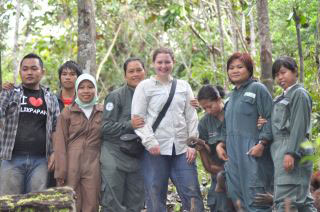 While I was there, I also got to visit the Borneo Orangutan Survival Foundation in East Kalimantan, Borneo. This site, as well as its sister site in central Kalimantan (where the TV series Orangutan Island was filmed), cares for and rehabilitates orphaned and injured orangutans with the hope of reintroducing them back to the wild. The Borneo Orangutan Survival Foundation currently cares for over 800 hundreds orangutans. It costs $3,500 to care for one orangutan for a year. Their most pressing issue is that there is not enough untouched rainforest, undisturbed by mining and agriculture, to release the orangutans into.

We met keepers and veterinarians that care for over 200 orangutans at the site we visited, caring for the apes 24 hours a day. The tour included visiting some of the man-made islands where small groups of orangs live, the vet center were very young infants stay and where sick apes are treated, and the baby house where we met three baby orangutans being cared around the clock by their surrogate keepers. 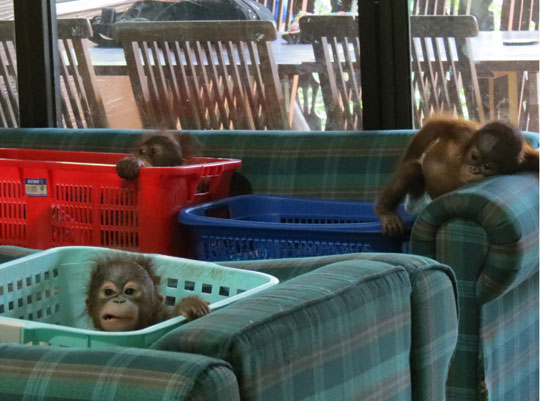 I had the unique opportunity, thanks to Dr. Monfort, to change my itinerary so that I could stay the night and see the orangutan “Forest School” in the morning. The Forest School is where they take juvenile orangutans out into the rain forest to learn the vital skills that they would have learned from their mothers. Classes in this school include tree climbing, nest building, and fruit finding. To see orangutans in their element doing what they do best was incredible.

Conservation of orangutans is not a straightforward process, and while my trip certainly was an opportunity to learn more about the issues surrounding the species, it did not shed light on one simple solution. While the Borneo Orangutan Survival Foundation does an incredible job of taking in the orphaned and sick animals and rehabilitating them and teaching young orangutans how to survive in the forest, without being able to release more animals into the wild, they are at capacity in their facilities. 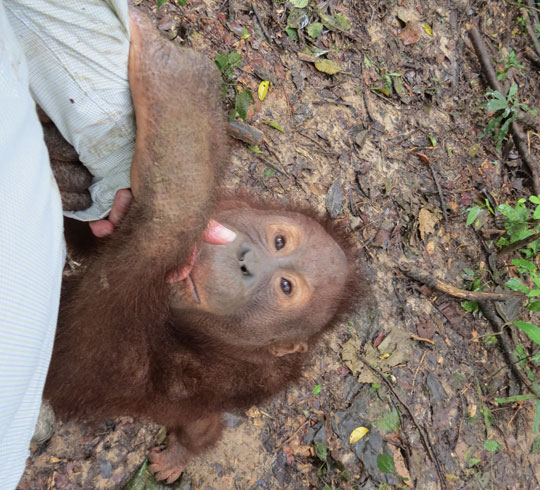 So the questions remain. How do we protect the forest? How do we create best practices for mining and agricultural industries? How do we balance the need to conserve species while also creating jobs and a living for the people that live in Indonesia? A balance must be made and enforced. How do we, as an AZA accredited zoo in the United States, help promote the conservation message of these species in Indonesia? What is the conservation message that zoos have adopted in the United States? The next step for me is finding as many answers as I can to some of these questions.

This story was originally published in March/April 2012 issue of Between the Lions, Friends of the National Zoo’s volunteer newsletter.