Oct. 28, 2012
How do white-tailed deer shape the forest understory and influence the distribution of other animals?

For 9 years we have monitored the small mammals and migratory birds in 12 areas, 6 of which were fenced to exclude deer. As the profile of under story characteristics changes, it may serve as an indicator for the potential of vertebrate species to live in these forests. 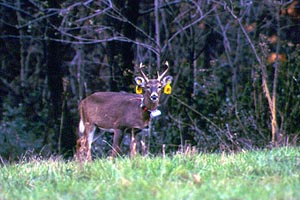 Managing for deer may serve as an indirect means to manage for these less obvious species. To quantify deer impacts, and develop an index that can be used by land managers, spring wildflowers within the lily and orchid families are censused along 12 km of marked transects at the SCBI Front Royal, and the phenology of marked individuals is examined for browsing.

We are attempting to measure the severity of deer browsing on select wildflowers, and place this damage within the context of other factors, such as insect damage, which also impact on survival and reproduction.

Deer densities have been surveyed at SCBI Front Royal since 1982, and within portions of the Shenandoah National Park and George Washington National Forest since 1990. These surveys have included line transects and fecal pellet plots.

Over 350 deer have been captured and marked with numbered eartags since 1982, and presently approximately 100 marked individuals are observed within the unhunted population. These marked individuals have provided valuable behavioral information on foraging, dispersal, and reproduction. Radiotelemetry studies on this population have formed a part of at least 5 graduate theses.