A Wolf in Coyote’s Clothing?

Twenty-seven million years before the first human was born in Africa, North America teemed with more than 25 species of dog-like animals. It was the heyday of dogs; never before or since has there been such a level of diversity among these animals. But scientists are still figuring out how we got from the “Cradle of Canines” to today.

It all started, scientists believe, 60 million years ago with the Miacids, tiny ferret-like insectivores with tails, the ancestors of today’s dogs (canids) and cats (felids). Canids settled into what is now North America, although the sporadic land bridge across the Bering Strait allowed some to roam over to Eurasia and some of their descendants to return. Each canid population evolved to maximize on traits that helped it survive in its new home.

For example, in modern North America, wolves and coyotes have very different lifestyles. Wolves hunt large prey, and so live in packs with strong bonds between individuals. Coyotes hunt small prey by themselves or in pairs. Wolves are territorial and extremely protective of their kills, while coyotes don’t need to protect small kills that they can eat quickly. When the two clash, wolves usually chase coyotes away, but when things turn bloody, coyotes barely stand a chance against their stronger cousins.

Scientists have always argued about where exactly to draw the lines between North American canid species. “It’s really all debatable, especially when it comes to looking at their genetics,” renowned biologist and wolf expert Ron Nowak said.

Now, a study published in the Journal of Mammalogy in October uses DNA from intestinal cells shed naturally in scat to learn more about coyotes. The results provide insight into both how coyotes reached the east coast, and their relationship with wolves—which has been more intimate than you may have guessed.

The team compared the DNA of coyotes in Virginia with samples from other populations. They found that Virginian coyotes shared the most DNA with populations in western New York and Pennsylvania. This result supports the theory that coyote populations grew and spread eastward via two routes: one southern, through the Mississippi Valley into the Virginias and Carolinas, and one northern, through the Great Lakes region to New England, New York, and the Appalachians.

Coyotes may have detoured around the middle of the country to avoid human populations. Although they are better able to cope with hunting pressure than wolves because of their smaller size and more independent lifestyle, safe is better than sorry.

The researchers also compared the coyote DNA to preserved specimens from wolves that lived in the Great Lakes region over a hundred years ago, before coyotes colonized the area. They found the two groups shared some of the same genes, which suggests that once coyotes did arrive, they got friendly with the locals. 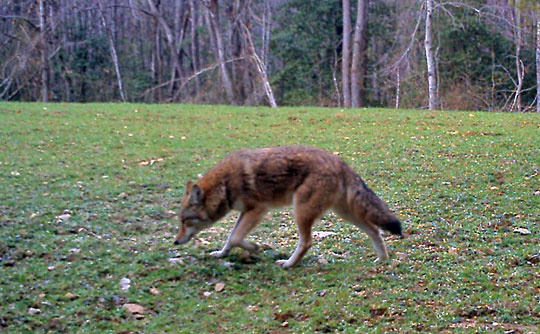 Hybridization with coyotes is also a threat to the recovery of wolves. Because of the mixed genetic heritage of the Great Lake wolves, some people argue they do not qualify for endangered species status. Hybrid coyotes in North Carolina are encroaching into the territory of the hundred or so extremely endangered red wolves living in the wild, which only got a second chance through careful captive breeding and reintroduction programs.Why does that matter? First, it may affect the future of the coyote-human relationship. Coyotes with Great Lakes wolf ancestry have differently-shaped jaws. “Perhaps hybrid coyotes will [help control] some of our overly abundant deer,” speculated Christine Bozarth, a researcher at the Smithsonian Conservation Biology Institute and lead author on the paper. That could also lead to conflict with livestock owners who raise similar animals, like sheep and goats.

But this study’s implications reach further than just into the tangled relationship between wolves and coyotes; it will also inform future genetic studies of species migration routes. Imagine asking a wolf politely for a cheek swab or blood sample to use for DNA testing and you can appreciate how important it is to develop procedures like those used in this study.

“For the past decade, our lab has developed and used noninvasive techniques to monitor and survey rare and endangered species in various regions of the world,” said Jesús Maldonado, a research geneticist at SCBI and co-author of the paper. “This was the first time that we were able to show that noninvasive techniques can also be an effective tool for tracking the origins and movement patterns of this elusive canid.”

Carnivores
An estimated 25 percent of carnivores are in danger of extinction. Smithsonian scientists are working to save them.