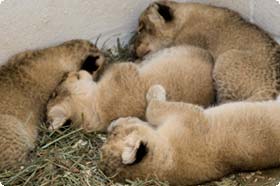 On August 30, around 10:30 p.m., the Smithsonian’s National Zoo’s 5-year-old female African lion Shera watched as her very first cub awkwardly wriggled at her feet. Moments later, lion keepers watching from a webcam breathed a sigh of relief as she lay down and gingerly groomed and nursed her cub. Three other cubs would shortly follow and begin calling for their mother in loud, staccato squeaks. Shera was a mother of four by morning.

Although Shera’s temperament indicated that she would be an attentive, protective mother, about thirty percent of captive lion cubs do not survive. (This is about half the rate of cub mortality in the wild.) The Zoo welcomed Shera’s cubs as its first surviving litter of lion cubs in 20 years. The birth was a triumph not only for Shera, but for the scientists and keepers who had put years of research and knowledge into this effort.

When keepers first introduced Shera to four-year-old Luke, the cubs’ father, they were following the Association of Zoos and Aquariums’ Species Survival Plan’s (SSP) recommendations. Each year, SSP scientists compile information about potential male and female breeders into one large matchmaking document aptly known as the studbook. Before the SSP can match lions with a mate, the lions are put through a rigorous background check. They must be healthy, sexually mature, and capable of breeding. Most importantly though, they assess an animal’s genetic value. The SSP panel reviews a lion’s entire family tree, including all known living and dead relatives. Lions that are wild-caught or have genes that are not well represented in zoos are more likely to be paired with mates.

It’s been a long time since the Zoo had the right combination of animals by age and gender to form a pride. But creating a pride of lions involves more than just putting the Zoo’s three African lions, Luke, Nababiep, and Shera, together and hoping they get along and breed. The process requires extensive planning, knowledge of the species’ natural history and an understanding of the individual animals.

“Animal keepers spend a considerable amount of time observing the behavior of individuals and getting to know their temperaments,” said Craig Saffoe, acting curator of great cats. “Even though lions are a social species, introducing individuals who are not familiar with each other can be highly dangerous. Any of these animals can hurt or kill the other if we don’t do our job well.”

The lions on their first day as a pride.

The research and patience has paid off. The sisters, Nababiep and Shera, spent more than a year sniffing Luke through a mesh door (called a “howdy door”) and keepers observed their reactions to determine how they might respond face-to-face. When the great cats were in the yard together for the first time, some scuffling ensued as they worked out their relationships. Eventually, however, everyone settled in, and Luke bred with both Naba and Shera.

Volunteers helped keepers observe how the lions spend their time, how close they stayed to one another and what times of the day they engaged in social play. Keepers and volunteers watched the lions’ breeding and territorial marking behaviors, including the matings that led to Shera’s and Naba’s pregnancies.

Between 1993 and 1998, the SSP stopped all lion breeding, suspecting that at some point the African and Asian species had been allowed to breed with one another, producing undesirable hybrids. Many of the lions in zoos at this time had unknown family histories—and could be African-Asian hybrids. Rather than breeding this genetically questionable stock, zoos kept these lions as educational ambassadors, giving scientists, keepers, and zoo visitors a window into lions’ social behavior.

The SSP determined that bringing lions of known lineages from Africa was the only way to maintain a sustainable, genetically healthy zoo population. The National Zoo’s three lions came from a private reserve in South Africa in October 2006. Because their genes are not well-represented in North American zoos, they are among the most valuable lions genetically in North America. Thus, Shera’s litter is genetically valuable; each cub will probably breed with lions from other AZA zoos and further contribute to the SSP.

Historically, lions bred easily in zoos. Scientists were befuddled, then, when the first generation allowed to breed after the break had far fewer cubs than previous generations, and fewer of those cubs survived until adulthood. Previously, not many scientists had studied lion reproduction. The need to study lion reproduction became urgent and necessary—if the animals failed to reproduce, zoo populations would be unable to sustain themselves.

In 2005, Budhan Pukazhenthi, a reproduction physiologist at the Smithsonian Conservation Biology Institute and reproductive advisor for the lion SSP, began studying captive lion reproduction to figure out, and solve, the problem.

Pukazhenthi and a team of scientists monitored the reproductive cycles of 20 lions in zoos across the country. They conducted reproductive exams on both males and females, and found no physical issues that could explain why the lions were not reproducing. They also collected and banked semen from several males. The team studied females’ reproductive cycles by studying hormones in fecal samples collected by dedicated keepers. They discovered that, though most cats (including lions) are induced ovulators—they ovulate in response to copulation—some females can ovulate spontaneously. This makes it extremely difficult to predict whether or not a copulation will lead to conception, and difficult to confirm a pregnancy.

Keepers and scientists at the Zoo monitored Shera’s hormones during her pregnancy, but cautiously refrained from any solid predictions. However, careful watching and monitoring confirmed her probable pregnancy, culminating in the birth of her four cubs at the end of August 2010. They are currently monitoring her sister Nababiep for cubs that are due in mid-September 2010.

The birth of the lion cubs marks the next step in building a pride, and keepers will slowly introduce Shera’s cubs to their aunt and father with the aim of eventually bringing all seven lions together, along with any cubs Nababiep has. The Zoo, keepers, scientists, and volunteers, are justifiably quite proud of this pride of lions.