Every animal care measure, exhibit, scientific research project and education program at the Smithsonian’s National Zoo and Conservation Biology Institute is made possible by donors. Read on for the latest updates on our work to save species, inspire visitors and train the next generation of conservationists.

Dr. Brandie Smith was recently elevated to the position of deputy director, Smithsonian’s National Zoo. She continues to oversee animal care sciences, where she supervises the care and management of the Zoo’s 2,700 animals, including animal exhibits and the Zoo’s nutrition, veterinary and pathology departments. She now also leads park management and horticulture, as well as safety and planning. These added responsibilities will allow Dr. Smith to better coordinate our work across departments. 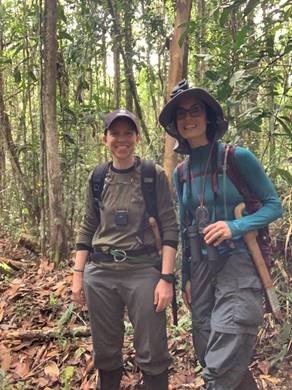 Wild orangutans are under serious threat of extinction. With the support of generous donors, primate keeper, Alex Reddy, M.S., traveled to Indonesian Borneo with primate curator, Meredith Bastian, Ph.D., in late June and early July to exchange information and work with collaborators in the field in Central Kalimantan and at Universitas Nasional in Jakarta. The Tuanan Orangutan Research Project has been an active wild Bornean orangutan research site since 2003 when Bastian first started her dissertation fieldwork there. She later established Sungai Lading, a satellite research site of Tuanan that was active from 2005 to 2007.

During this 2019 trip, Bastian visited the site of Sungai Lading with one of her former field assistants to confirm that all remaining viable orangutan habitat in the area was destroyed in the 2010 and 2015 fires. This trip and future visits to Tuanan will help Reddy integrate her observations into her daily keeper talks at the Smithsonian's National Zoo.

A new set of flippers splashed down at Smithsonian’s National Zoo! We celebrated the arrival of a California sea lion pup on June 23 at 11 p.m. Animal care staff closely monitored the pup born to 14-year-old mother, Calli, in an off-exhibit area after its birth. The pup made its public debut in September 2019.

Local citizen scientists working with the Changing Landscapes Initiative and Virginia Working Landscapes, both programs of the Smithsonian Conservation Biology Institute, discovered a rare orchid that is nearly extinct in the commonwealth of Virginia. The purple fringeless orchid (Platanthera peramoena) is estimated to have fewer than 1,000 individual plants left in the state.

Citizen scientists Patty Lane and Kate Heneberry noticed a purple flower in a pasture while conducting a routine orchid survey on a private farm just south of Sperryville, Virginia, in July. After investigating, they identified the plant as a rare orchid; their rare find was confirmed by experts at Shenandoah National Park. “It’s the first of these rare orchids we’ve found through our surveys, so it’s a big moment for our new project and for our volunteers” said Joe Guthrie, who was the field survey coordinator of the orchid project and is the research coordinator for Virginia Working Landscapes.

Scimitar-horned oryx were extinct in the wild until 2016 when the Environment Agency–Abu Dhabi (EAD) and the government of Chad started releasing Oryx born in human care to the wild. Since the reintroductions began, there are now approximately 100 animals living in the wild. SCBI ecologists are collecting behavioral data on the reintroduced Oryx from satellite collars.

The herd of scimitar-horned oryx is growing at SCBI in Front Royal, Virginia. Keepers welcomed five calves born between June 23 and July 1. Four of the calves are male, and one calf is a female; they all appear to be healthy and thriving. Keepers monitor the calves to ensure that they nurse and develop normally. They usually have to monitor the calves from a distance, because they young oryx spend much of their time hiding in their barn or the grass of their pasture. In the wild, oryx calves hide and avoid unfamiliar things to evade predators.