Skip to main content
X
× As a public health precaution due to COVID-19, all Smithsonian museums are temporarily closed. We are not announcing a reopening date at this time and will provide updates on our websites and social media.
Share this page:

Welcome to the Animal Poetry Challenge for DCPS students in grades 1 and 2!

The challenge is easy! First, learn more about one of the animals selected for your grade. Then, use what you have learned and your imagination to write a poem about this amazing animal. It can be any kind of poem you like. Submit your poem below or send your poem to your teacher, and they will send it to the animal keepers at the Smithsonian's National Zoo!

Even though the Zoo is closed, the animal keepers are working hard each day to take care of the animals, and your poems will bring big smiles to their faces. 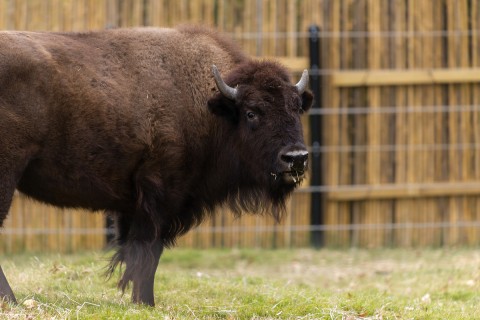 Did You Know? The American bison was the first animal that ever lived at the Smithsonian's National Zoo. 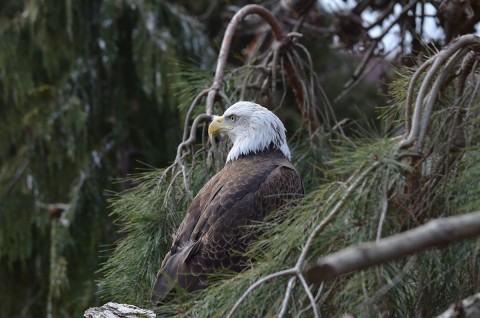 The bald eagle has been the national bird and an important symbol of the United States of America since 1782. It appears on coins, flags, government buildings and even the President's carpet in the Oval Office. Because the bald eagle holds this important role, it also often appears as a symbol in art. Bald eagles are large brown birds with white heads, necks and tails. They have sharp claws (called talons) that help them catch fish to eat. Have you seen an image of a bald eagle around Washington, D.C.?

Did You Know? The bald eagle has a very tiny voice for a very large bird. The loud screech that you might think of when you think of a bald eagle is actually the call of a red-tailed hawk! 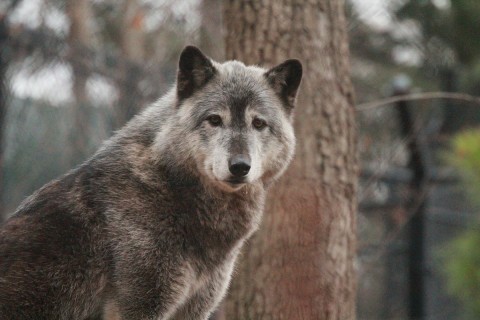 Gray wolves are the largest members of the canine family, meaning they are related to and share many features with dogs. They live in packs in forests across the northern United States and our neighbor Canada. Although their name calls them "gray," these wolves can be many different colors, including gray, black, brown and white. Their colors help them camouflage, or blend in, to their surroundings, so their color often varies by the type of habitat where they live. A wolf pack lives, hunts and raises pups together.

Did You Know: Wolves don't howl at the moon; they howl to communicate important information to members of their pack! 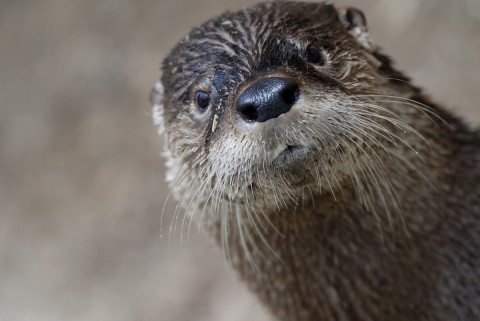 The North American river otter is a playful, social creature that lives along the shores of streams, rivers, lakes, ponds and marshes in the United States and our neighbor Canada. River otters are aquatic animals, which means they have many features that make them great swimmers, like webbed feet and long, muscular tails. They can close their ears and nostrils underwater. They even have special "third eyelids" that protect their eyes and allow them to see underwater. They live alone or in pairs but often gather in large groups to play, swim, slide and dive together.

Did You Know: Just like you might like to play on a slide or in a sled in the snow; otters love to slide down logs into water or along paths in the snow. 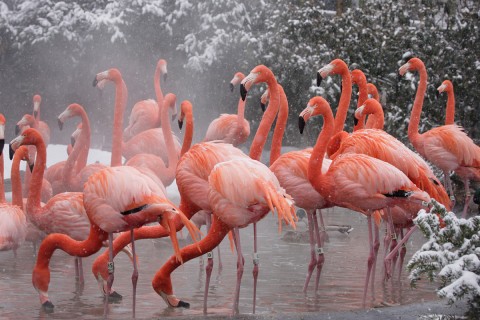 American flamingos are bright pink birds with long, graceful necks and legs. They live in the southern area of our neighboring country Mexico. They also live on some Caribbean islands and in South America. American flamingos live together in huge, noisy flocks. There can be thousands of birds in a single flock! They live around lakes, coasts and swamps where they can find food like algae, shrimp and mollusks to eat. The Zoo has a flock of flamingos that lives outside the Bird House.

Did You Know: Flamingos are born with light gray feathers; their feathers become pink or even orange because of a pigment in the foods they eat! 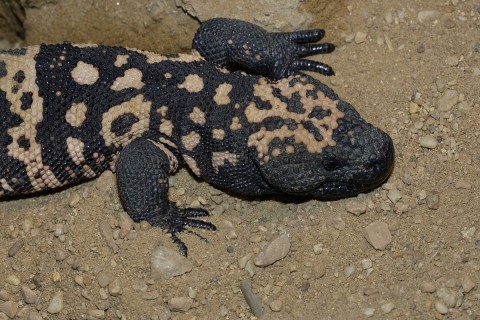 This monster is real! Gila monsters live in deserts in the southwestern United States and our neighbor Mexico. These large lizards can grow almost 2 feet long and are covered with bumpy, black scales marked with pink or orange patterns. Gila monsters are one of the only venomous lizards in the world; their venom is almost as strong as a rattlesnake's. They spend most of their lives hidden underground, only emerging to hunt, eat and mate.

Did You Know: Because the Gila monster can store so much fat in its tail and body, it only needs to eat about three to four times a year!