Acrobat of the Aerial Leaf Litter 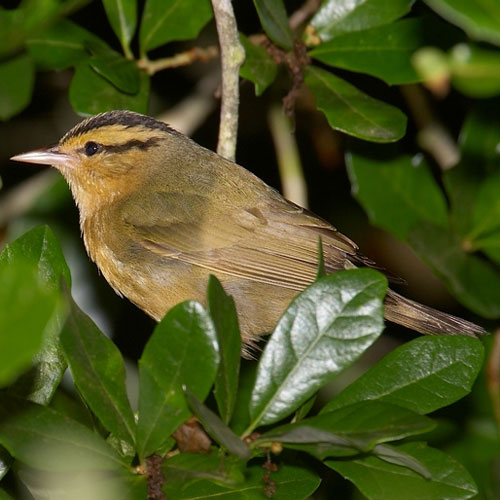 I commonly experience the Worm-eating Warbler in two ways. During the winter, walking through the tropical forest in Belize, I hear a soft rustling through the drone of cicadas. Whipping around to place my binoculars to my eyes, I glimpse a warbler hanging head down from a leaf draped from a small vine. The warbler spots me, stares glassy-eyed for a brief second and is gone. During the summer, it's a warm and humid morning on a dry laurel covered slope in New Jersey. I hear a lifeless buzzy trill. Scanning the Chestnut Oak foliage, I eventually spot the Wormer singing lazily from the end of a branch high in the canopy.

Thoreau should have loved this elusive species, for it is the soul of simplicity. Consider the plumage of elegant earth shades broken only by the striking black and warm buff head stripes. Worm-eating Warblers have no age, sex, or seasonal variation in plumage to speak of (even the juvenile plumage is similar in pattern) and one of the smallest vocal repertoires with which I am familiar. Besides the trill, Wormers occasionally give a canary-like flight song and have a couple of types of call notes. That this modest, retiring bird does not vocalize much may contribute to the perception that it is uncommon. In fact, it is often common and its abundance is probably always underestimated.

For such an obscure bird, the Worm-eating Warbler has been subject to more than its share of myths. Take the name. The Vernacular and Scientific names proclaim a "worm eating" habit in English, Latin, and Greek. I am not sure of the origins of the worm-eating names. They may refer to the Wormer's foraging for caterpillars during the breeding season, a propensity it shares with most other wood warblers. Or perhaps someone a long time ago observed a female gathering hair moss for nesting material by scratching the bare earth and thought the bird was hunting worms. (All Wormer nests are cups of broken leaves lined with hair moss and usually tucked under a shrub, root, or log on the ground).

A second pervasive myth regards the species' foraging behavior. It is often noted—even as a diagnostic character - that Wormers commonly walk with tail cocked. In my experience, Worm-eating Warblers search foliage,aerial leaf litter, and occasionally the bark of large limbs for food - but foraging on the ground is rare. Occasionally a lost prey item is chased to the leaf litter where this relatively short-legged species may hop briefly to give chase. Perhaps long ago, an early ornithologist misidentified an ovenbird as a Worm-eating Warbler and this observation continues to replicate in the birding and ornithological literature.

The real behavior of the Worm-eating Warbler is more fascinating than the myth. Most Wormers winter in the Caribbean Basin (Hispanola, Jamaica, Mexico, Belize etc) where they search the aerial leaf litter of the understory and mid-strata of tropical forests. Aerial leaf litter consists of leaves that are caught in the vegetation as they fall from the canopy, sewn to branches by fungal mycelium, and become home to large tropical spiders and insects. These arthropods are protected from most birds. But a few, including our hero—by hanging on the leaf, inserting their bill into the leaf tube, and slowly opening their mandibles—can capture many of the juicy items within.

This foraging behavior is a true foraging specialization that Wormers share with some tropical wrens, antbirds, ovenbirds, and a scattering of other resident species. It is a specialization for which Wormers are well adapted; they have a long and heavy bill for prying and short tarsus for hanging. On the Mesoamerican mainland, they are almost always in mixed species flocks—which may protect them from predation as they stick their head in leaf clusters.

Although Wormers probe dead leaves in North America, they are much more specialized on the aerial leaf litter during the winter months in the tropics. What prepares young Worm-eating Warblers to take on this specialization when they arrive on their tropical wintering grounds? This is, in part, a psychological question and warbler psychology is a difficult and rarely pursued science. However, I will describe one experiment that gives some insight into the mind of a young Worm-eating Warbler.

I raised Wormers and released them into aviaries with a set of objects when they became exploratory teen-age warblers (about two weeks old). These "toys" were natural including clusters of live foliage and dead curled leaves, and artificial objects (craft materials from Woolworth's). Interestingly, young warblers greatly preferred to play with the dead leaves. But even more interestingly, the warblers ranked all the toys almost identically in terms of time spent playing—even when raised in isolation from other warblers. These results suggest a high degree of innately programmed preference in the exploratory behavior of this highly specialized warbler.