Alwright, I Finally Got a Name 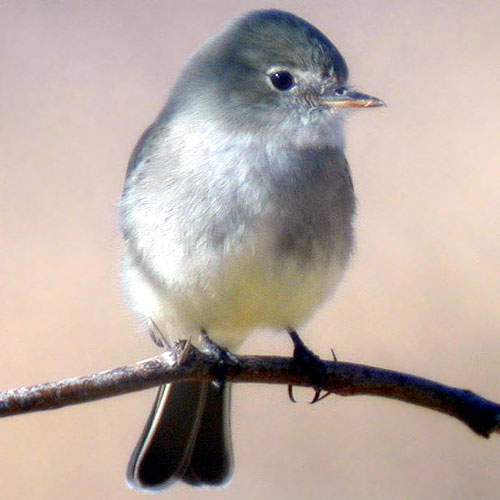 Out on the range, in the sage and pine lives the Great Basin's indomitable, spirited Empidonax, the Gray Flycatcher. The subject of much confusion in the late 19th and early 20th Centuries, this enigmatic, little gray bird was hopelessly misunderstood by ornithologists. It looks very similar to the Dusky Flycatcher and for several decades the two species were thought to be one and the same.

In fact, the current scientific name of the Gray, E. wrightii was the scientific name of the Dusky for many years. During these early times, it was mistakenly thought that Gray Flycatchers did not breed north of Mexico and that the few birds found wintering in Arizona and southern California were an example of a "reverse migration" found in some tropical flycatchers. That is, they thought that these birds bred in Mexico and some flew north for the winter.

Because of the growing realization that they were not same species as the Dusky Flycatcher and the ability to identify them improved in the 1920's and 30's, it was soon known that Gray Flycatchers breed in the dry sagebrush country of the western United States, often in the shade of junipers or ponderosa or pinyon pines.

Their nests are made of twigs, hair, grass, shreds of sagebrush or juniper bark and are lined with feathers. Placed low in sagebrush, nests are, according to an early ornithologist, James Dixon, "the best concealed of any of the flycatchers that I have ever contacted". Sometimes their territories abut a Dusky Flycatcher's and these species can be found fighting it out with numerous chases and an exaggerated vocal display.

Gray Flycatchers spend their winter in the brushy, dry interior of Mexico's central plateau, northern border regions and Baja California. Much of their life in winter remains unstudied, partly because they do not seem to have serious threats to their population. Perhaps this is best explained by the fact that they do not rely on habitats with commercially valuable timber, so large-scale habitat loss associated with deforestation has not been a concern among ornithologists.

However, recent studies have shown that they may prefer territories with trees. This suggests that their reproductive success may be better in a semi-forested habitat. However, as one ornithologist noted, "I have failed to find them in some areas that seem perfectly suitable". There simply is not enough known yet about their ecology.

For much of the past 110 years when Gray Flycatchers were first collected in Mexico, most ornithologists and birders were unable to identify them in the field. Only relatively recently has our outlook changed as birders began to critically observe Empidonax in the field. One behavior was found to be absolutely flawless for distinguishing a Gray Flycatcher from its cousins. Other Empidonax flycatchers, if they wag their tails, will wag them by jerking them up and then lowering them. A Gray Flycatcher, in contrast, will gently lower its tail, then raise it. It may be tricky to see at first, but with enough practice, the difference is clear.

Other characteristics include the drab, overall gray color in breeding plumage, the long tail, long and flat or thin bill with a yellow lower mandible, narrow white eyering that is thicker at the lores (between the bill and eye), and the song and calls (although still similar to Dusky and some other species).

Because of the newfound abilities of birders to identify Gray Flycatchers, many have been found in "odd" places. Recent sightings suggest that not only is this flycatcher commonly found much farther north than previously thought (now into southern British Columbia), but also that their migration route is not entirely in the interior, arid west. During recent spring migrations, they have been found regularly along the western foothills of the Sierra Nevada range as well as along the coastline and river valleys of northwestern California.

There is still much to be understood about this little gray bird. It seems that the uncovering of its mysteries go hand-in-hand with our ability to identify it. As the ornithologists of the late 19th Century would agree, some things never change.