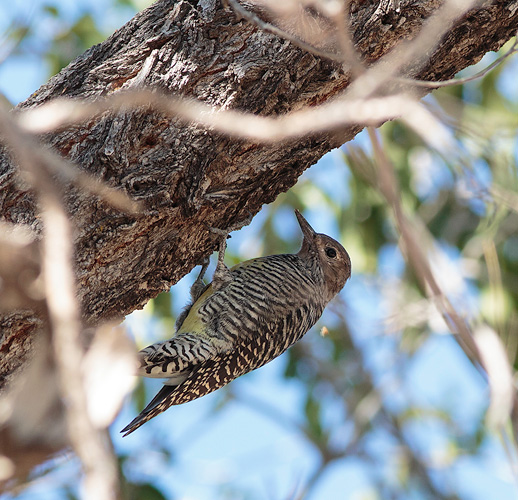 If you read Mary Deinlein's profile of the yellow-bellied sapsucker that appeared in this series in 2003, you know that we have learned a lot about the sap feeding habits of this highly specialized woodpecker. But as they say “Here is the rest of the story!”

“A singular habit…and one with which all are familiar, is that which has gained him the name of 'sap-sucker.' He bores little round holes just through the bark of the tree, usually an apple tree, not penetrating into the wood of the branch. These holes form a complete circle around the branch of the tree, about half an inch apart. No theory has yet been advanced that explains satisfactorily the object of the bird in making these perforations. The theory that they are made for the purpose of sap-sucking is after all the most rational one.”

Wilson Flagg wrote this paragraph in the Atlantic Monthly in September 1879. The bird he was talking about, however, wasn't the yellow-bellied sapsucker, nor was it the red-naped, red-breasted, or Williamson's sapsucker. It was the downy woodpecker. In fact, there are a number of sap-feeding woodpeckers and many other species feed at sap wells created by woodpeckers.

Things have changed since the days of the early naturalists when any woodpecker seen at a sap well was shot on sight. It is now illegal to destroy a migratory bird in the United States, even if it is harming the side of your house, or girdling a favorite tree.

The best known of these is the acorn woodpecker whose range extends from the southwestern U.S. to Colombia. Downy, hairy, and red-bellied woodpeckers frequently feed at holes they have excavated themselves. And in Europe, the greater and lesser spotted woodpeckers commonly feed at sap wells of their own making.

Among woodpeckers, the sapsuckers' bodies and behaviors are specialized for the mechanics of eating sap. Sapsuckers have a brush at the end of their tongues instead of the spear and rake of other woodpeckers, and their tongues don't extend nearly as far out of their bills. Most woodpeckers have long hyoid bones that support the tongue's root.

In most woodpeckers, the hyoid bones lie in a groove that wraps around behind the skull from the back of the tongue to the top of the head above the eyes. When a woodpecker sticks its tongue into the burrow of a wood-boring insect, it probes a long way until it finds its prey, which it then impales and rakes out of the burrow.

Not so with sapsuckers. Their hyoids extend just a bit past the angle of the jaw, which means the tongue can only stick a little ways out of the beak.

At other times of the year localized areas of photosynthesis such as green bark near the tips of branches, or xylem sap of semi-dormant plants is utilized. We still need to learn much more about how and when sapsuckers eat, as well as how they create and use sap wells.

Lowell Overton and Douglas Rhoads used mitochondrial DNA to determine that the Cuban green woodpecker is probably an ancestor of both the sapsucker (Sphyrapicus) and red-headed woodpecker (Melanerpes) genera.

The yellow-bellied group probably broke into many species relatively recently, driven by isolation by the continental glaciers that, until recently, covered most of North America.

Because it's the older cousin, the Williamson's sapsucker had a longer time to adapt to sapsucking and to develop other specialized characteristics. Among them is an unusual degree of sexual dimorphism—plumage difference between the sexes.

In most woodpeckers, there is only a slight difference in the sexes' plumage: for example, in the amount of red on the head. But the Williamson's sapsucker sexes wear very different plumages.

The female Williamson's sapsucker wears a drab suit of prison stripes without decoration and without the sapsucker racing stripe on the wing like the rest of the genus. She looks so different that in 1852 John Cassin identified her as one species, and in 1857 John Newberry classified the male as a separate species. It wasn't until Henry Henshaw saw a pair together in Colorado that they got together taxonomically.

Like the yellow-bellied clan, the Williamson's sapsucker prefers to nest in live aspen trees that have been infested with a fungus that softens the core of the tree, making nest hole excavation easier.

The Williamson's sapsucker appears to be in decline throughout its western range. Breeding Bird Surveys show a decline during the 1982 to 1991 report period. We need more data, including more BBS routes, to give a clearer picture. The yellow-bellied group of sapsuckers appears to have more stable populations. But that may be an artifact of the more extensive BBS coverage in the Eastern United States.

So be slow to condemn and quick to learn the next time you see newly minted sap wells on a tree or shrub. You may be surprised at what you learn.