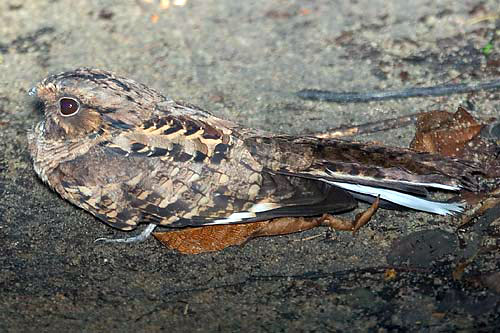 As darkness descends along rural roadsides from Texas to Argentina, mysterious ember-like dots appear near ground level. Reflecting the beams of car headlights, this orange glow emanates from the eyes of a cryptic bird of the night known as the Common Pauraque. With the onset of twilight, pauraques come out to begin a night of feeding on the wing, using their large gape (mouth) to snare moths and beetles at or near ground level.

Their attraction to roadsides is undoubtedly an adaptation to an open microhabitat similar to stream edges, open fields, savannas and treefall gaps. Perhaps they are attracted to insects illuminated by vehicle lights. Whatever the reason, almost any rural nighttime drive in the American tropics will likely bring you into contact with this ubiquitous member of the Order Caprimulgiformes.

Caprimulgiformes are found on every continent but Antarctica. Four of the families, the common names being potoos, oilbirds, frogmouths, and owlet-nightjars, have restricted geographic ranges, usually confined to a single continent or a region spanning two adjacent continents. By contrast, the nightjar family (Caprimulgidae)?to which the Common Pauraque belongs?has a global distribution, with the greatest diversity found in the American tropics.

Other members of this family include the nighthawk and whip-poor-will. Pauraques range from Texas to northern Argentina. Most populations are thought to be resident, although the subspecies in southern Texas probably is a short-distance migrant wintering in eastern Mexico.

Pauraques prefer wooded habitats, but can be found in several other vegetation types, including scrubland, agricultural landscapes, semi-arid regions, llanos, marshes, and even mangrove swamps. They are crepuscular and nocturnal when foraging. Short sallies from the ground or from a favorite perch are typical of pauraques.

Foraging is facilitated by distinctive adaptations related to the bird's mouth and eyes. The lower jaw is highly specialized to allow the gape to open wide both vertically and horizontally; this huge mouth allows feeding on large flying insects. Along with the wide gape, the bird also sports rictal bristles, which are modified feathers resembling stiff hairs alongside its mouth (it looks like a sparse, wiry mustache).

Highly tactile and controlled by specialized muscles, these bristles are thought to aid in night feeding, and probably protect the bird's eyes from flailing insect legs and wings. The pauraque's large eyes are placed laterally on the head, giving this night hunter an impressive visual field (imagine how much more area you could see if your eyes were on the side of your head). The presence of a tapetum—a reflective membrane behind the retina that enhances vision in low-light conditions—augments the light-gathering ability of the pauraque's eyes, a positive feature for a bird hunting in low-visibility situations.

A detailed study of the Common Pauraque's roadside behavior in Trinidad concluded that the association with roads represents an adaptive and opportunistic behavior that takes advantage of the road's (especially those of dirt) lighter color. Pauraques are more frequently seen sitting on the side of the road during full moons. Moreover, they nearly always sit at the side of the road, facing toward the center. Such positioning apparently provides the pauraque with better chances to see night-flying insects attracted to the light-colored surface in the moonlight.

The genus and species names reflect the pauraque's appearance and behavior. Nyctidromus means "night-runner," in reference to the bird's nocturnal, low-to-the-ground foraging. The species name, albicollis, describes the white, bib-like splotch on the pauraque's throat. Central Americans know the "white-necked night-runner" as "Don Pucuyo" or "Caballero de la Noche" ("Gentleman of the Night")—names reflecting its association with love and presumed amorous influence over young women. A common name in much of Latin America is "tapacamino" ("road coverer"), a moniker obviously derived from its roadside presence.

The song of N. albicollis is an extremely variable whistle, with a prolonged note at the end. Singing is heard most frequently at dusk and dawn, as well as throughout moonlit nights.

The pauraque measures 22 to 28 centimeters (8.5 to 11 inches) in length and displays one of two distinct color schemes. One is light-colored, featuring buff, tan and beige tones; the darker scheme is more reddish-brown in overall coloration. Both color morphs are cryptic, making the bird nearly invisible against the ground or vegetation. A second line of defense is behavioral, in which the pauraque flattens itself to the ground with "closed" eyes when danger approaches. It views the threat through slightly opened lids, slowly turning its head to keep the danger in sight. Its final defensive maneuver is to flush from this hunkered-down position.

N. albicollis builds its nests upon the ground, often among rocks. Both parents incubate the eggs for about 20 days and feed the young once they hatch. In hot weather, pauraques often open their mouths wide and vibrate the throat area, a behavior known as gular-fluttering. Like panting, it's a thermoregulation behavior that helps to cool the body by increasing the rate of evaporation through the mouth.

Like nightjars in general, pauraques have a low wing-loading, meaning that they have a large wing area relative to their body mass. This makes them powerful and agile flyers, as evidenced by the short bursts, strong twists and turns, and precision moves they demonstrate in feeding. This gives this mysterious denizen of tropical roads the appearance of a large fluttering moth.

If you have a chance to be out at night in rural south Texas or in Latin America—especially near the time of a full moon and on a dirt road—look for Common Pauraques. If you drive slowly, these nightjars can be approached quite closely, offering a good look at their beauty and behavior. And if you cut the car engine and just sit, you might also hear them sing.