This Bird is Bound to Berry 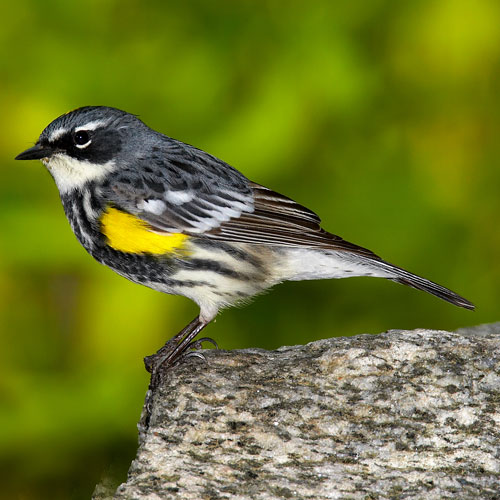 January winds in Nantucket are wicked, a ferocious combination of arctic cold and New England dampness. Downtown streets and rural woods are nearly empty—tourists and birds alike having fled for warmer climes. The island is hospitable only to the large, heavy-coated northerners, like eiders and snowy owls. At least it seems that way. That is, until you stumble into a thicket of bayberries, alive with the chip notes of delicate and demure myrtle warblers.

The wintering range of the myrtle warbler, the "eastern" race of the yellow-rumped warbler (AKA butter butt), demonstrates that it is clearly the hardiest of the wood warblers—a group of birds not known for their toughness. Whereas most wood warblers winter in the tropics, myrtles can be found in the winter as far north as New Brunswick and the shores of the Great Lakes. The trick is that the myrtle warbler dines on the fat-filled fruits of its namesake, the wax myrtles (and bayberries) of the genus Myrica, which pump it full of energy to survive the harsh temperate winters.

So strong is their dependence that its winter range corresponds largely, if not entirely, with Myrica. The southern edge of the winter distribution, Panama, is also the southern extent of Myrica in Latin America. The disjunct population of warblers wintering along coastal California, Oregon and Washington coincides with a west coast distribution of Myrica as well.

So profound is their dependence on Myrica berries, that myrtle warblers are thought to be one of the few vertebrates that can digest wax—a major constituent of wax myrtle and bayberries (used during colonial times for candles).

To North Americans, the myrtle warbler may be one of the most familiar of the wood warblers. This is largely due to its winter distribution. However, two general principles of eastern warbler watching contribute:

However, myrtle warblers even challenge what we mean by migration period. They are capable of remaining in a state of migratory readiness throughout the entire winter. This means that they can accumulate fat stores and are prepared, when food supplies dwindle, to take off on nocturnal, migratory flights. This facultative migration allows myrtle warblers to leave an area when conditions deteriorate to search for a more hospitable spot.

Myrtle warblers are the "go-anywhere, do-anything" warbler. That is, they are innovative when using a wide variety of foraging maneuvers to capture their food. For example, they have been observed drinking nectar from red maple blossoms as well as searching for aquatic invertebrates by the ocean's edge.

In contrast to this winter wildness, breeding myrtle warblers are unremarkable foliage-gleaning insectivores that occur in nuclear family groups on all-purpose territories in the vast northern boreal forests. Rather than cueing in on fruiting shrubs, nesting myrtles are attracted to coniferous trees. Even atop Spruce Knob, Virginia—the southern extreme of their breeding range—family groups can be found huddled in a tiny relictual patch of Red Spruce on the summit.

They are found throughout most boreal coniferous habitats—even the unproductive pine barrens and black spruce muskegs—but they actually seem to eschew the more productive mixed-coniferous habitats. Douglass Morse, who spent years studying warblers in northern forests, speculated that this generalized habitat use is related to the fact that myrtle warblers are subordinate to other warbler species. This is a bit surprising as myrtles are larger than most of the more dominant warblers and bigger birds usually rule.

Myrtle warblers are among the most adaptable warblers and are delightful to watch as they forage in a myriad of habitats and display many of the techniques that other warblers use for capturing food. In the middle of a long winter, they remind many of us of warmer days when migratory songbirds captivate our attention.