Bird of the Cowboys and Gauchos 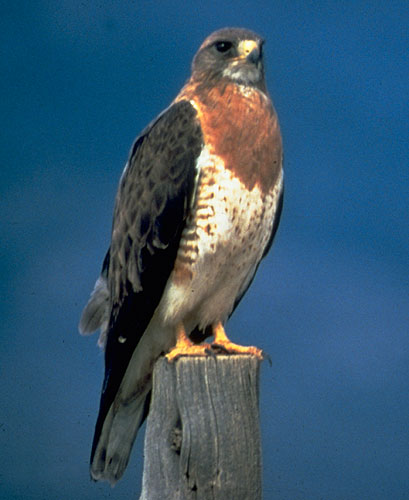 As the summer gives way to autumn nearly the entire population of Swainson's Hawk migrates from the temperate zone of North America to its wintering grounds in the pampas of South America. The 20,000 km roundtrip that this hawk travels each year places it among the world's longest-distance migratory raptors. This species is even a very rare fall visitor to the Eastern U.S., usually in flocks of Broad-winged Hawks and has been known to winter in southern Florida and central California.

Flocks of several hundred immature birds and adults—the latter having finished raising their offspring—group together by late August and early September, and begin to put on fat for their upcoming journey by gorging on grasshoppers until northerly winds arrive and the flocks get aloft for traveling south. From now on the flocks, called kettles, take any opportunity to facilitate their flight by using northerly air currents and thermals. Thermals actually represent columns of air rising right from the surface of heated patches of the land.

The way the birds use these thermals is that they gain height without flapping their wings as the column rises then when it cools down the birds glide down to a neighboring thermal and repeat the process with very little effort and energy expense. However, when the sun is blocked out and thermals or other propelling currents do not occur, the raptors usually perch or fly over short distances with some effort only to change perching spots.

Because they rely heavily on thermals they usually attempt to avoid crossing water surfaces from which thermals rarely rise. The matchless example of how raptor migration is dependent on land is the importance of Panama—that narrow land bridge that connects North and South America. In order to migrate to and from North and South America, these raptors have no choice but to obey the geographic pattern and funnel in enormous numbers through this narrow land bridge.

Its passage through this region is an impressive sight, with flocks sometimes numbering several hundred thousand birds heading south. They usually pass in long straggling lines or in clusters and roost in flocks of over 100 birds at night. And it is not until the sun heats up the land that a fascinating spectacle arises: enormous numbers of Swainson's Hawks begin circling and soaring in newly-formed thermals as if they have sprung from nowhere. One cannot but be astounded by watching a "cyclone" of soaring hawks gradually traveling south and moving out of sight.

In Mexico large concentrations pass just west of the Gulf of Mexico and over Veracruz. Between Mexico and Panama, most migrants occur on the Pacific slope and pass over Nicaragua without stopping, then cross the upper Andes in Columbia and continue their way along the eastern foothills of Andes, south through western Brazil and eastern Bolivia down to Argentina. As the flocks find themselves in northern South America, they begin to fan out to the south, and sizes of migrating flocks decrease. It seems that during their journey from North America all the way down to Argentina, Swainson's Hawks hardly refuel themselves and fast for most of the time.

Swainson's Hawk is almost unique in switching from a diet of primarily small mammals when raising young to insects when migrating or wintering. As a soaring, open-country hunter, it often hunts from perches such as tree tops, poles or posts, rocks, and elevated ground, surprising prey like ground squirrels, pocket gophers, voles, deer mice, various small birds, lizards and snakes. Sometimes it perches still on the ground near ground squirrel holes waiting for them to emerge, especially near dusk. It also snatches bats while they fly in flocks.

However it eats insects at all times. But on its wintering grounds, it apparently exclusively eats insects such as grasshoppers, dragonflies, butterflies and moths, and leaf beetles which it catches on the ground or in midair with its talons, in the latter case eating them in flight.

The enormous distance that Swainson's Hawks cover each year, has various deadly threats ready to ambush them any time. The threats include casual shooting, collisions with artificial constructions, pesticide and toxic poisoning in addition to habitat loss at both its breeding and wintering grounds. In Argentina, in 1995 and 1996, organophospate insecticide usage to control a grasshopper outbreak in alfalfa and sunflower fields caused the death of nearly 6,000 Swainson's Hawks—the hawks died within several days after they feasted on poisoned grasshoppers. Many more hawks died within minutes of being sprayed directly by pesticide applicators while they foraged in fields.

The birds that successfully survive the perilous journey and the winter in the pampas of Argentina, will undertake the long-distance flight back to their breeding grounds in North America. Hopefully, Swainson's Hawks will continue this time-honored migration in numbers that recall those "cyclones" of the past. Whether Man, either on purpose or from ignorance, ends these spectacles is a concern that all people and nations from North to South America need to address now and continuously in the future.