The Bird that Loves the Bees 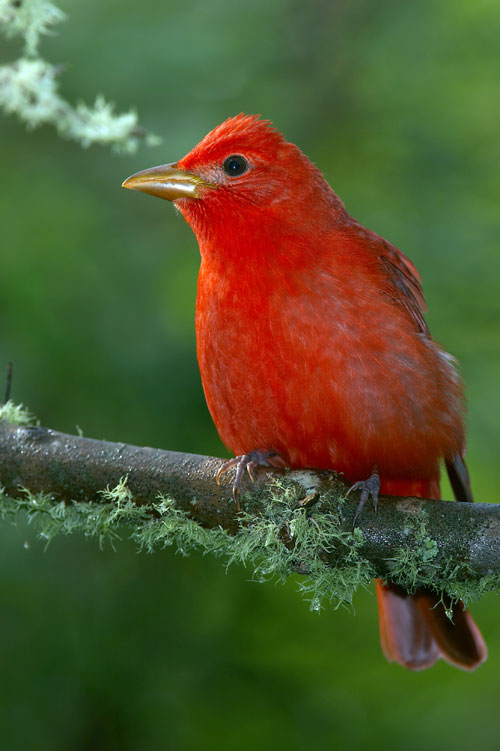 One might know the Summer Tanager by its alias, the "beebird." Due to its diet of bees, it is a well-known pest around apiaries and is persecuted by beekeepers. Primarily insectivorous, this tanager is considered a bee and wasp specialist, although it eats a wide variety of flying and non-flying insects, such as cicadas, grasshoppers, ants, beetles, dragonflies, grubs, caterpillars, weevils and spiders.

They are excellent flycatchers, able to seize adult bees and wasps in mid-flight and take them back to a perch where it beats them against the branch until they die. It then wipes them on the branch to remove the stingers before eating them. One of their favorite foods is wasp larvae and pupae. Summer Tanagers harass or kill the adult wasps guarding the vespiaries. This leaves the wasp nest abandoned and by tearing the paper covering open, the larvae are easily plucked from their homes.

In addition to their diet of bees and wasps, Summer Tanagers also eat fruits and berries, especially during the late breeding season, while migrating and while on their wintering grounds. These include items such as blackberries, blueberries, whortleberries, mulberries, pokeweed, citrus, plantains and bananas.

Weighing an average of 30 g and reaching lengths of 17 cm, the Summer Tanager is rather large in comparison to other tanagers. Their light brown bills are pointed, and fairly stout. The adult male has red plumage, ranging from bright rose or orange-red throughout the year, and is brightest on its underparts. Unlike the male Scarlet Tanager, the Summer Tanager has paler plumage, not intense scarlet, and reddish wings and tail rather than black.

Adult female Summer Tanagers have brownish to orange-yellow underparts, an olive back, with olive-gray wings and tail, whereas the female Scarlet Tanagers appear greener and have dark wings. Some females gain complete male pigmentation as they advance in age. The plumages of immature birds are similar to the female's coloring. 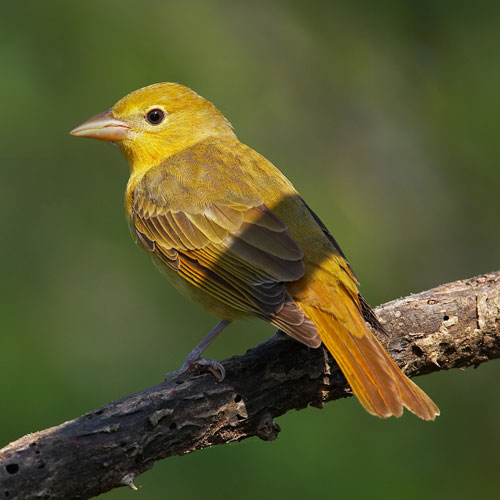 One study found that Summer Tanagers in a lowland of Ecuador all had dull, female-type plumage. Additional observations found that most sightings of at higher elevations in the Andes are of adult, male-plumaged birds. This may suggest elevational preferences by sex during wintering periods in South America. Interestingly though, in Central America, both sexes are found wintering together.

This neotropical migratory bird arrives in mid-April to late May to summer throughout much of the southern United States and northern Mexico. Male summer tanagers arrive on the breeding grounds in full song, usually a few days before females arrive. At the start of the breeding season the male sings vigorously all day to attract females and establish a territory. Pairs are usually hidden in tall treetops, and thus are difficult to spot. Summer tanagers keep one mate throughout each breeding season, but not necessarily in successive seasons.

Male birds are the primary songsters in most songbird species, though in a few species the females also sing (e.g.. Northern Cardinal and grosbeaks). The song of the male Summer Tanager is cheery, rich and musical, unlike the Scarlet Tanager's which is hoarser and harsher. If a female Summer Tanager does sing, it is a brief, garbled version of the male's song. When agitated, both sexes give a loud, 'pit-i-dock' clicking call.

Summer Tanagers leave their breeding grounds in September and October to return to their winter range, which extends from southern Mexico to northern South America. Like all migrants, the tanager deposits large amounts of fat before the beginning of migration. This fat store serves as fuel for long flights, which usually take place during the night. During stopover rests, flocks of as large as 30 individuals may be quite a spectacle, aggregated in treetops along their migratory routes. Summer Tanagers which breed in the east cross the Gulf of Mexico, while the western birds tend to take an overland route through Mexico.

In the eastern part of its range, the summer tanager inhabits open deciduous woods. In the west, it occupies riparian woodlands consisting primarily of cottonwoods and willows. At higher elevations it prefers habitat dominated by mesquite and salt cedar. During migration, it is sometimes found in orchards, parks, and trees along roadsides. On the wintering grounds, it continues to inhabit riparian woodlands, open and second growth habitats, forest edge, shaded plantations, and trees in parks and gardens.

After the 4 to 5 days it takes to complete an open-cup nest, egg-laying begins. The nest is constructed out on a horizontal branch by the female, and consists of dried grasses, weeds, leaves, spider webs and strips of bark lined with fine grasses. Birds in the east usually build nests so flimsy and ragged, the eggs can be seen through the bottom, while the nests of summer tanagers in the west are sturdy and well-constructed. Usually 3-4 pale bluish or greenish-blue eggs are laid.

The eggs are somewhat glossy and spotted more heavily on the large end with browns, purples and grays creating a 'capped' look. During incubation, the male spends a lot of time resting and caring for his feathers, and occasionally feeds the incubating female, who may beg him for food. Like other songbirds, the chicks are fed whole insects by both parents after hatching.

Because the nests of the Summer Tanager are built inaccessibly high in the treetops, there have been few studies of their basic breeding biology. Despite the fact that summer tanagers spend more than half of the year in the tropics, even less is known about their wintering ecology.

Overall, the population is considered stable, though sharp declines in the west may be attributed to tremendous losses in their riparian forest habitat. A nearly total conversion of riparian forest to agricultural lands in the Colorado River valley may be the leading cause of an almost complete disappearance of this species from that area. Night migration casualties due to radio and TV tower collisions may also be a factor. Protection of breeding and wintering habitat is key to the survival of this delightful, bee-loving species.