Bird of Many Voices 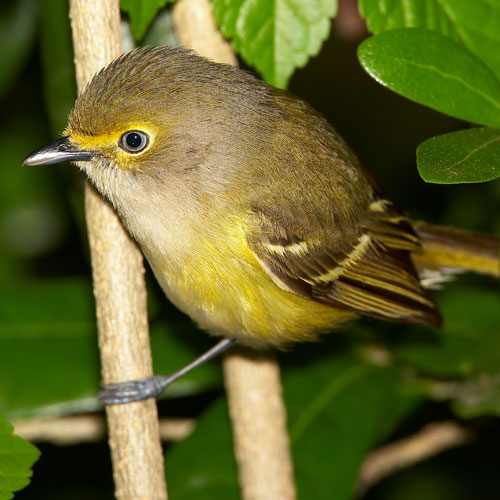 Wait. I think I hear a Summer Tanager calling from that shrub over there. No, it sounds more like a Great Crested Flycatcher. But, in a shrub?? No I think I'm hearing a Rufous-sided Towhee!? Is this a strange flock? Hold it, I see a bird that's small and olive, with some yellow below…It's a White-eyed Vireo singing away!

Despite being a secretive and modest bird, the White-eyed Vireo has many fascinating aspects of its behavior. For example, the White-eyed Vireo is a superb vocal mimic, incorporating the calls of many species in its song. Exactly why it does this remains a controversial topic and an ornithological mystery.

Although subdued in color, the White-eyed Vireo is handsome. The grayish olive upperparts are set off by yellow sides, and the luminescent white irises contrast with bright yellow goggles. They sport neat white and yellow wing bars and tasteful blue-gray legs. Our favorite part of the vireo's appearance is rarely observed by birders in the field; the White-eyed Vireo is one of the few birds that has a jet black mouth lining.

White-eyed Vireos breed commonly from the eastern United States through northern Mexico. Most U.S. populations migrate, whereas birds in the south coastal plains through the gulf coast of Mexico remain resident. Migratory White-eyed Vireos can be found throughout the Caribbean Basin during the winter, but probably most White-eyed vireos winter on the Yucatan Peninsula, where it is one of the most abundant species.

In the north, White-eyeds are common in scrubby habitats. One can only imagine how well they did after the eastern forests were cleared for farms, then abandoned to second growth. Perhaps because of continued forest regeneration, White-eyeds may be declining in abundance in some areas - but they remain a common bird of southern shrublands.

The White-eyed Vireo is one in a complex of 9 vireo species found in Mexico, Central America and the West Indies. The White-eyeds closest competitor is the resident "Mangrove" Vireo—an abundant bird of secondary scrub on the Yucatan Peninsula. For the most part, these two species coexist peacefully except when it comes to feeding on the fruits of the Gumbo Limbo tree (Bursera simaruba). At this tree White-eyeds exert their dominance.

The two species separate, to a degree, by habitat. White-eyed Vireos are most common in dry forest. When they are found in second growth or agricultural lands, they are often associated with small patches of trees. However, rather than forest or forest patches, per se, it is possible that White-eyed Vireo distribution is tied to that of its beloved Gumbo Limbo tree. In more humid tropical areas, such as Chiapas and Veracruz, White-eyeds are found primarily in scrub, riparian woods and coffee plantations.

White-eyeds are among the most consistently territorial migratory birds during the winter. Both sexes defend small territories from October - April. Also unusual feature is their habit of singing throughout the winter months. In addition, White-eyeds give a staccato chatter-burst which sounds more like a wren then anything else.

Each morning White-eyes visit their Gumbo Limbo trees and search the thousands of fruits for the few that are ripe on a given morning. The search requires keen eyesight since the greenish- or rose-colored capsules remain closed and must be squeezed and popped open. Only capsules with ripe red fruit inside will open and the only clue to ripeness is slight lines where the three segments of the capsule cover converge. No wonder most frugivorous birds pass by the Gumbo Limbo tree until late in the 6-month fruiting season (March and April) when the remaining fruits ripen almost all at once.

In the temperate zone, White-eyed Vireos are abundant insectivores in early successional habitats. Like other vireos, White-eyeds have short, stout bills with a small hook. The fibers of their jaw muscles are arranged for maximum force of bill closure, and the bill can be opened very wide at the tip. Furthermore, vireos often use their feet when wrestling prey. These features allow vireos to feed on large caterpillars and insects with hard carapaces, as well as to husk tropical fruits.

This focus on eating fewer, larger insects probably explains the fundamental behavioral difference between warblers and vireos with which most birders are familiar. Vireos move deliberately, with a low frequency of long hops and flights compared to warblers. Even this small vireo (11-12 g - about the size of a Hooded Warbler), can be readily distinguished from a warbler by its more sluggish movements.

In sum, the modest and deliberate White-eyed Vireo is a bird of many voices, a prodigious consumer of insects, and a planter of tropical forest—traits worthy of the SMBC bird of the month distinction.