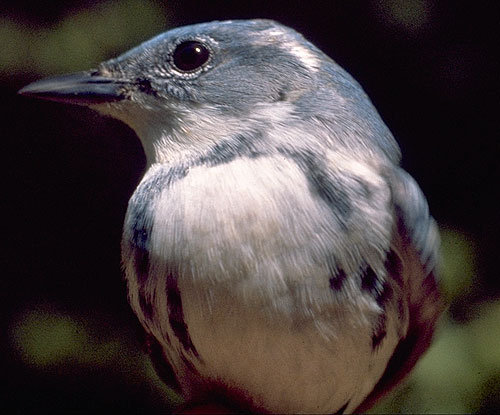 For many North American birdwatchers, the Cerulean Warbler is one of the most sought-after species during spring and summer. This elusive, azure-colored songbird is uncommon over most of its breeding range, and spends the majority of its time high in the forest canopy, giving it a reputation for being notoriously difficult to see. The renowned ornithologist A.C. Bent, in Life Histories of North American Wood Warblers (1953), accurately described the challenge of observing this species:

“This warbler, a bird of the treetops in heavy deciduous woods, where its colors make it difficult to distinguish among the lights and shadows of the lofty foliage and against the blue sky, is well named cerulean!”

Over the last decade, the intense interest among amateur birdwatchers in the Cerulean Warbler has turned into growing conservation and management concern. Breeding populations of Cerulean Warblers have been declining precipitously since the 1960s, faster than any other migratory warbler in eastern North America. Although the Cerulean Warbler has no official protected status in the United States'it is not listed as an 'Endangered Species' 'it is listed as a 'Species of Special Concern' in Canada, and it is the focus of considerable attention on a state-by-state basis. Our ability to diagnose the causes of the Cerulean Warbler's decline has been hampered by our limited understanding of its ecology and behavior.

Cerulean Warblers are temperate-tropical migrants and, like most North American migratory species, spend more than half of the year in the tropics. On the breeding grounds, they are found primarily in large tracts of deciduous forests. The breeding range extends from Mississippi and Alabama north to eastern Ontario and from Iowa and Missouri east to the Appalachian Mountains. Recently, researchers have documented a subtle shift in the Cerulean Warbler's breeding range towards the northeast. Whether this shift represents a true range expansion into novel locations or a re-colonization of habitats that were occupied in previous centuries remains an open question. Cerulean Warblers migrate south in late summer, and appear on their winter quarters in the northern Andes of South America by October. Their return journey north begins in late March or early April.

Bottomland forests, low-elevation woodlands along rivers and lakes, have been thought to be the preferred habitat of this bird. However, a recent expansion of Cerulean Warbler survey efforts (largely organized by the Cerulean Warbler Atlas Project at the Cornell Laboratory of Ornithology) revealed that this species also occupies upland forest habitats. Cerulean Warblers appear to be 'area sensitive,' meaning they require large, relatively undisturbed areas of breeding habitat. This pattern is most apparent in the southern and central United States. However, in more northerly parts of the breeding range they may also be found in smaller patches of forest. Obviously, much remains to be learned about the distribution of this enigmatic species.

Our understanding of the Cerulean Warbler's breeding biology has increased in recent years. Males arrive on breeding grounds before females, and establish territories that they defend throughout the breeding season. Females arrive about a week after males. Birds often return year after year to the same territories, as is common in many other migratory species. Research conducted throughout the breeding range indicates that territories have specific structural features in terms of forest-canopy complexity and size of trees. Based on evidence from the Queen's University Biological Station in southern Ontario, it appears that male Cerulean Warblers use different tree species for singing and foraging than females use for nesting. These findings suggest suitable habitat must include a complicated set of vegetation and structural features.

Patient observers with a keen eye can witness some fascinating behaviors by the Cerulean Warbler during the breeding season. Many males actively help females choose nest sites while "whisper" singing (singing very softly) and closely following their mates. When females are incubating eggs, males often watch over the nest while the female leaves to forage. Females frequently exit their canopy nests by tumbling from the nest. In doing so, the female resembles a leaf falling from a tree until, just above the forest floor, she untucks her wings and swiftly flies off parallel to the ground. Both males and females feed nestlings and care for fledglings once they have left the nest. Rarely, females may attempt to nest twice in a season . Like many other socially monogamous species, female Cerulean Warblers often "cheat" on their partners during a breeding season and raise young sired by multiple males.

Unfortunately, we know very little about the ecology of Cerulean Warblers during the non-breeding season. Ceruleans are generally restricted to mid-elevation forests on the eastern slopes of the Andes Mountains. These forests are among the most threatened in South America, and are being rapidly degraded by coffee, tea, and cacao production. Some Cerulean Warblers do overwinter in human-modified landscapes, but we do not know how their survival in these habitats compares to that in undisturbed forests.

Hope for the continued survival of the Cerulean Warbler can be found in the formation of the Cerulean Warbler Technical Group (CWTG). The CWTG, founded in 2002, is a dedicated multinational group of academic scientists, government and non-governmental biologists, industry biologists, and private citizens who have come together with a common goal of solving the riddle of Cerulean Warbler population declines. The combined efforts of the CWTG will go a long way toward filling major gaps in our knowledge of Cerulean Warbler ecology and behavior during the breeding and non-breeding season. We hope to find some answers in time to preserve a species that, for many, has come to symbolize the health of North America's forested ecosystems.