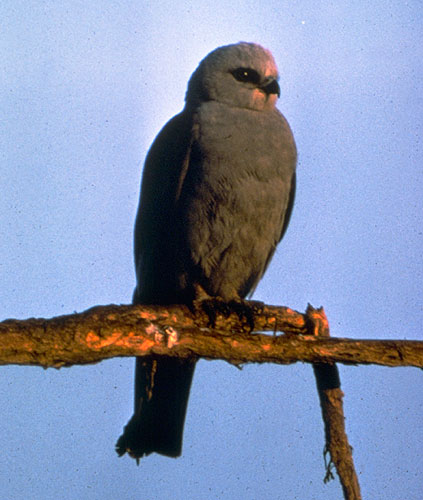 Not many raptors can match the buoyancy, ease and grace with which Mississippi kites conquer the sky. During their brief courtship period, the kites' aerial displays to their prospective mates are a sight to behold.

Throughout the year, they occupy much of their time in flight during which they catch large flying insects, mostly dragonflies, on the wing.

As soon as a kite locates suitable prey it dashes and catches it in midair with its talons, and often eats it in flight. They sometimes takes insects on the ground and in trees, and will readily take every opportunity to grab reptiles, amphibians and any other small living creatures as well.

As the fall sets in and the flying insects slowly disappear, Mississippi kites gather in large flocks for their southbound migration, spending the winter in South America as far south as Argentina, and returning north during the warm days of mid-April. Each spring and fall several thousand migrating kites are seen funneling through a narrow pathway at the southernmost tip of Texas.

Mississippi kites sometime wander quite far north and west of their breeding range which is restricted to the southern Great Plains and the southeastern United States, with isolated breeding colonies in Arizona and New Mexico. Fortunately, unlike most raptors all over the world, both the population and range of Mississippi Kite are increasing.