A Closer Look at an Ordinary Species

Few bird walks in the right season and habitat fail to provide a white-throated sparrow sighting. Accordingly, white-throateds are noted as "common" on most local checklists published within their range. It may be difficult for some birders to get excited about seeing the same old regular birds, but there is more to white-throated sparrows than meets the eye.

White-throated sparrows are considered a "common" species partly because they are fairly abundant and their range is reasonably wide. In contrast to many migratory bird populations, which are declining rapidly, white-throated numbers appear to be comparatively stable, or at least on only a relatively slow decline. One reason for this trend is that their habitat is currently plentiful.

In the northeastern U.S. and across most of Canada, white-throateds breed in semi-open coniferous and mixed forests that are regenerating following logging, fires, or insect damage, and where secondary growth provides a low, dense understory. With a steady demand for timber products, combined with the regular occurrence of fires (natural and human-induced) and insect damage, breeding habitat should be available to white-throateds for years to come as forests regenerate. However, the conversion of forested lands to agricultural fields does eliminate potential breeding habitats, as it does for many species.

Although urbanization in the mid-Atlantic and southeastern U.S. has engulfed much of this sparrow's winter range, they seem to have adjusted fairly well. Wintering white-throateds can often be found in suburban neighborhoods and city parks, clinging to cover provided by hedgerows, weeds, and shrubs just as they do in rural areas. White-throateds are regular visitors to yards with feeders, where they prefer to feed on seed scattered on the ground near cover.

In addition to being abundant and widespread, white-throated sparrows are easily detected by both sight and sound. White-throateds forage primarily on or close to the ground, so they are easier to spot than cryptic canopy foragers, and white-throateds can be observed for extended periods without the neck strain that accompanies canopy-bird watching.

Their song is a long, slow series of whistled notes often paraphrased as "Old Sam Peabody, Peabody, Peabody" or "Oh sweet Canada, Canada, Canada." Their song is so loud and distinct, in fact, that a novice birder can identify it even among the noisiest of morning birdsong choruses. Their frequent use of call notes, a rich "tseep" and a sharp "pink," and boisterous leaf-kicking habits give their position away while they forage in thick cover.

Winter flocks are particularly noisy when congregating at dusk for the evening roost and as they scatter from the roost at dawn to feed.

Although white-throated sparrows are indeed common, they should by no means be considered ordinary. These sparrows exhibit a characteristic that is rare in birds, they show genetically-based plumage polymorphism. In other words, these sparrows come in two different color forms, or morphs.

During the breeding season, the morphs are most easily distinguished by the colors of their crown stripes. The "white-stripe" morph typically has distinctly contrasting black and white crown stripes and bright yellow lores (the area between the eyes and the base of the bill), while the "tan-stripe" morph has duller black (or dark brown) and tan (or pale brown) stripes and less vivid lores.

Although color morph can be difficult to determine in winter plumage, the polymorphism is due to chromosomal differences and does not change with age or season, although this was a common misconception among early ornithologists, as evidenced by white-throated sparrow species accounts from most field guides published before 1970. 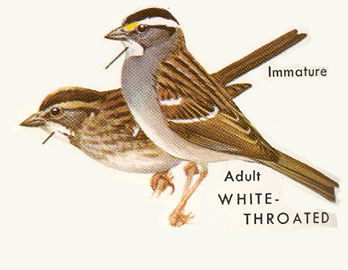 We now know that both male and female white-throated sparrows exhibit this polymorphism. Moreover, an individual almost always pairs with another of the opposite color morph for breeding. And despite the fact that images of the white-striped morph are more frequently presented to illustrate the species, the two color morphs actually occur in relatively equal numbers in the population.

Most interesting is that behavior differs between color morphs, especially during the breeding season. Both male and female white-stripe birds are more aggressive than tan-stripe birds. In fact, white-striped females will even sing and contribute to territorial defense, whereas tan-striped females do not. In contrast, tan-striped birds of both sexes provide more care to their young than white-striped birds do. Check out the video below from a recent study on white-throated sparrow parental behavior.

This morph-specific variation in behavior has drawn a great deal of attention from scientists investigating bird behavior. White-throated sparrows have been the focus of myriad ornithological studies of aggression, parental care, habitat selection, migration, mate choice, extra-pair mating, and polymorphism in birds. In addition, white-throateds have become a model species for studying the physiological mechanisms that control bird behavior. For example, recent studies suggest that behavioral differences between the color morphs are associated with morph-specific differences in hormone levels and brain anatomy.

Discoveries such as these provide new and fascinating insights into the factors that influence bird behavior, and spur further research. This common species has an uncommon amount to teach us.