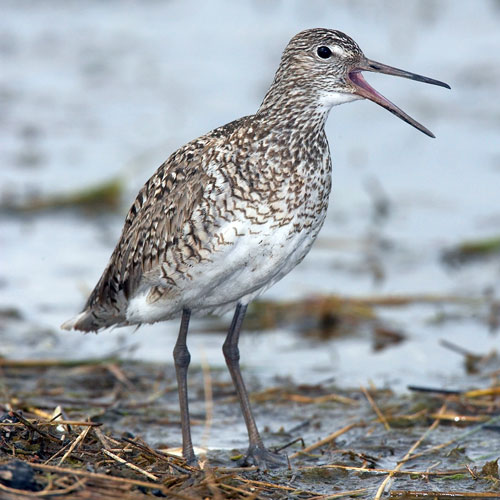 All willets fly south after the breeding season, and because it is so difficult to tell the differences between the western and eastern willet, the non-breeding distributions of these two versions of the willet has always been troublesome to ascertain. Willets in winter are seen all along the Pacific coast, from Oregon to Ecuador; the shores of the Gulf of Mexico; and on the northern Atlantic coast of South America.

In spring, eastern willets begin to arrive on their salt marsh breeding grounds along the east coast of the United States in March and April. After a bit of courtship and territory establishment, they begin nesting. One study found that, while arrivals on the breeding area may be staggered, willets tend to synchronize the timing of their nesting.

For a ground-nesting bird that lays eggs in salt marshes teeming with egg-eaters like crows and raccoons (and for a time, people—Forbush in 1912 noted that willet eggs were “well flavored” and “considered a delicacy by baymen”), it might be best for all the pairs to nest more or less at once. This may lower the odds of any one nest being eaten. Willets place their nests in high spots that stay above most high tides in the salt marsh, or on adjacent vegetated sandy beach areas.

Not much is known about how willets raise their young, probably because the chicks are able to move about soon after hatching and make themselves very inconspicuous in the salt marsh grasses. When a potential predator is near, adults protect their young by pretending to have a broken wing to draw the attention of the predator to themselves, much like the killdeer (another shorebird that is famous for this behavior). Willets may also carry their young one-by-one to safer areas. Adults can swim across creeks and fly while carrying a chick.

Willets are a rarely heralded conservation success story. While a current account of eastern willets says they are a “common and conspicuous breeder in eastern salt marshes,” this hasn't always been true. People used to hunt, not only their eggs, but also the bird itself. There was a long tradition of shorebird hunting on the east coast, where the largest shorebirds were the most desirable and decoys and calls were used, just as in duck hunting.

The willets were more vulnerable to this than other shorebirds that go to the arctic to breed. Although these species had to run the gauntlet through the United States, their privacy and safety could be assured once they got to their breeding grounds in the arctic, far from most people. Not so for the willet. Its distinction as one of the few breeders in the lower 48 meant that hunters harried it throughout the breeding season.

Humans actually extirpated willets from much of their east coast range, becoming very rare along the coast north of Virginia by 1910. Field and Stream magazine (1904) had serial accounts of “Our American Gamebirds.”" Among the birds profiled in that year were black-bellied plover and the willet. Even as he described how to hunt them, the author admitted that they had disappeared from places like the marshes of New Jersey “probably owing to the heavy shooting… In late years they have rapidly decreased.”

Fortunately, not long after this, regulations were enacted to protect migratory birds. In 1913, spring hunting was outlawed and even more significantly, in 1918, the Migratory Bird Treaty Act was passed, which banned market hunting of migratory birds, including the shorebirds and ducks that were the primary focus of market hunters. After becoming protected, willets made a slow and steady recovery, reappearing in New Jersey in the 1950s; New York in the 1960s; in Maine, Massachusetts and Connecticut in the 1970s; and New Hampshire and Rhode Island in the 1980s.

Now willets are once again a ubiquitous member of the coastal bird community throughout their original range and much of the wetland habitat they depend upon for breeding is protected. But as they have recovered from overhunting, a new threat has emerged: climate change and the sea level rise that goes along with it.

Given that all the habitat willets use is only inches above the current sea level, even the most conservative predictions of sea level rise will affect willet habitat. It's hard to know exactly how willets will be affected because the response of wetland habitats to changing sea levels is hard to predict. Nonetheless, it unfortunately seems clear that significant challenges lie ahead for this species.