The Dark Side of Migratory Birds 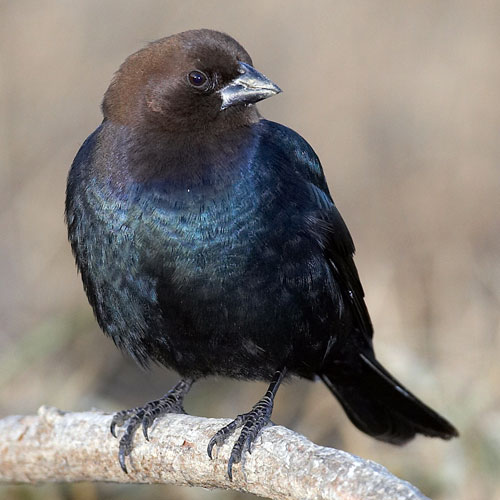 Perhaps no bird species in North American elicits a more emotional response from birders and researchers alike than the brown-headed cowbird (Molothrus ater; hereafter: cowbirds). Cowbirds are fascinating to many for having maybe the most unusual breeding biology of any bird on the continent, yet reviled by many more for their reputation as "cheats" with poor family values.

Cowbirds are an enigma. As a native species they are part of the amazing diversity of our avifauna, yet they have used opportunities provided by human activities to expand their range to the detriment of many other native species.

Cowbirds are songbirds, and members of the same taxonomic family as blackbirds and orioles, the Icteridae. Like their blackbird cousins they are sexually dimorphic. The males are larger than females; their bodies are black with a striking iridescent sheen, and their head is brown.

The females are smaller and much more cryptic with mostly uniform tan plumage, with the exception of a pale throat. Also like many blackbirds, cowbirds have conical bills, ideal for a diet of both grain and insects. While the males are distinctive, female cowbirds in the field can be confused with female Brewer's blackbirds (Euphagus cyanocephalus) where the species overlap.

The best way to distinguish the two visually is the pale throat, smaller size, and shorter, more conical bill of the cowbird. There are two other cowbird species with very limited ranges in the United States: the shiny cowbird (Molothrus bonariensis), only found in most southern Florida, and the bronzed cowbird (Molothrus aeneus), only found in southern Texas and southeastern Arizona. The former is best distinguished by a more pointed bill and uniform color, and the latter by its red eyes and uniform color.

Male cowbirds are the vocal champions of North American songbirds. Their distinctive song spans the greatest range of pitch of any bird. It begins with a very low-pitched "glug-glug" followed by an extremely high-pitched "glee". The male often accompanies this song with a vigorous display of his glossy plumage. Female vocalization is mostly limited to a loud rattle call, thought by some to be a territorial signal.

The similarities with other blackbirds end when you consider how cowbirds reproduce. Cowbirds are what are known as obligate brood parasites. This means they do not provide any direct care for their offspring, beyond choosing a site to lay their egg. They lay their eggs in the nests of other species.

Many of these "host" birds will then incubate the egg and raise the young cowbird, as if it were one of its own brood. While Molothrus cowbirds are the only obligate brood parasites in North America, they are not alone in the bird world. In all, parasitism as the sole mode of reproduction has evolved in five different families, including European and Asian cuckoos, African honeyguides (family Indicatoridae), and even in waterfowl (the black-headed duck, Heteronetta atricapilla).

Many of these species are "specialist" parasites, meaning they only lay eggs in the nest of one host species. Cowbirds, on the other hand, are considered extreme "generalist" parasites. Cowbird eggs have been found in nests of more than 300 species, including many species that are not capable of raising cowbird young, like hawks and sandpipers. Many fewer species are true hosts (that is, can reliably raise cowbirds to fledging), but in any given songbird community, many adequate hosts may exist.

Some of the most common cowbird hosts are:

The odd egg found in a hawk or sandpiper nest is most likely the result of a female cowbird having an egg ready to lay intended for an appropriate host nest, but the chosen nest was eaten by a predator. As a result she may choose to place the egg in any nest she can find, appropriate host or not.

This mode of reproduction leaves cowbirds inextricably linked to other songbird species, and dependant on stealing resources from them for their own young, most importantly food, but also incubation energy. Cowbirds have evolved to exploit host parents to their advantage.

Cowbird young beg for food more vigorously than hosts, and host parents respond to this by feeding cowbirds disproportionately more than their own offspring. Interestingly, unlike many other obligate brood parasites, most famously (or infamously) the common cuckoo (Cuculus canorus), cowbird females and their young do not expel all the host eggs and young from the nest.

Female cowbirds do generally remove 1 or 2 host eggs after laying their own, but almost never all of them. But why not reduce the competition with their chick to zero as cuckoos do? Rebecca Kilner and others appear to have answered this question by examining cowbird young in eastern phoebe (Sayornis phoebe) nests.

In their study, cowbird young that shared the nest with 2 phoebe young grew faster than cowbirds that were alone in the nest. The reason: parents bring food to a nest with 3 young more often than a nest with 1. The cowbird, though, is better at begging, so it gets a greater proportion of the food than the 2 phoebes. In other words, cowbirds exploit the begging of their foster siblings to get more food than if they were alone!

Reproducing in this matter has led to very unique breeding ecology and behavior in cowbirds. Female cowbirds have evolved to be outstanding nest searchers, using the behavior of adult hosts to find nests to parasitize, such as a female warbler making frequent trips to the nest during building.

Generally, females use high perch sites, such as snags, to watch host pairs and locate their nests. Unlike most songbirds, it is the female cowbirds that primarily defend territories. On their territory, they are not defending a food resource or potential mates, but their most important breeding resource: host nests. Female cowbirds repeatedly return to this breeding site every spring to search for hosts.

The advantage of returning is most likely two-fold

By becoming familiar with hosts and nest sites female cowbirds can become familiar with both the behavior of individual birds, as well as their quality as hosts. (Did they fledge one of my young last year? If so, I will lay an egg with them again). In fact, researchers on Mandarte Island in Canada have demonstrated that cowbirds preferentially parasitize more experienced song sparrows, potentially because they are better at raising young to fledging than younger, more inexperienced sparrows.

Interestingly, cowbirds do not spend all day in their breeding areas; cowbirds are commuters. They will spend the early hours of the day in the breeding season searching for nests. They then leave in the afternoon to join large foraging flocks. Often these flocks congregate at bird feeders, live stock pens, and other areas with concentrations of food.

At night, they roost in flocks, dispersing in the morning to return to breeding territories. Males generally form small groups that follow individual females around, displaying and singing in hopes of mating with her when she finds a nest to parasitize.

Cowbirds are considered short-distance migrants. This means that they remain on the North American continent, generally traveling to the southern United States and northern Mexico in winter. During winter, they join large mixed-species flocks composed of other blackbirds, such as Brewer's and red-winged. Little is known about the connectivity between particular breeding populations and their wintering sites.

Cowbirds are generally most common in open habitats and forest edges, and less common in the interior of forests. Before European colonization of North America, breeding cowbirds were largely limited to the prairies of the Midwest, where they were often associated with American bison herds. It is thought that trampling of the grassland by bison exposed large amounts of food for cowbird flocks.

However, ancient cowbird specimens have been recovered from more far-flung places, such as the La Brea tar-pits in Los Angeles, indicating they may have been more widespread when large mammalian herbivores were more prominent on the continent. After European colonization, cowbirds experienced a large range expansion following the deforestation of the eastern U.S. and the introduction of livestock to the west, and their range now covers most of the continent. They are declining, however, in areas where forests have regenerated, such as the Northeast.

There is no question that cowbirds can adversely affect their host populations. This effect is variable though, depending largely on the breeding ecology, population size, and developmental biology of the host. For instance, relatively large-bodied hosts or those that produce many broods, such as red-winged blackbirds and song sparrows, can usually be successful at raising a number of their own young along with a cowbird, dampening the overall effect of parasitism on the population.

For some species, however, a single cowbird egg can result in total loss of reproduction for a nesting pair. This is especially true of hosts that have longer incubation times than cowbirds, such as vireos and many flycatchers. Since the cowbird egg hatches first and the females will stop incubating to feed the chick, their own eggs rarely hatch. Thus, these populations can come under great threat if cowbird parasitism is frequent, as has been the case with some endangered species, like the black-capped vireo (Vireo atricapilla).

Many species have evolved mechanisms to prevent losses in reproductive success from cowbirds. One example is the yellow warbler, which will often recognize a foreign egg in the nest and bury the egg under another layer of nesting material, essentially making a "double-decker" nest, and leaving the cowbird non-the-wiser that its egg has no chance of hatching. In some cases, the cowbird will catch on and lay another egg, prompting the warbler to build a third tier!

While it is true that cowbirds are of conservation concern to many populations, we must be careful not to overlook more immediate and profound challenges to populations, particularly loss of habitat, in favor of the easy target of cowbirds. It also is important to remember that cowbirds are a native species that has a natural place in many bird communities. The late naturalist and conservationist David Gaines put the conundrum of cowbirds particularly well when he wrote:

"It is all too easy to vilify cowbirds. True they have tipped nature's balance to the detriment of native species. But let us not forget that we, through our use and abuse of the land, have allowed them to thrive and multiply. Without humans, there would be no cowbird 'problem'. The blame lies with us, not them."