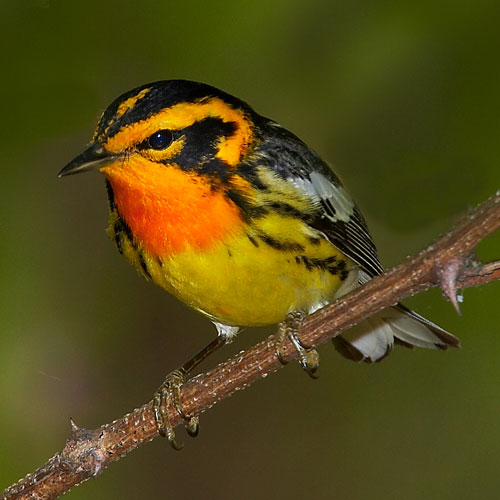 Those of you who have suffered from "warbler neck" may well have acquired this common birding malaise while attempting to find our Bird of the Month, high in the top of a spruce or hemlock tree. But as patient birders know, that pain in the neck can certainly yield rich rewards with even a glimpse of this fire-throated beauty.

The Blackburnian Warbler (Dendroica fusca) breeds in the north spruce woods of Canada and the northeastern United States. Closely tied to tall coniferous forests, the species does make its way down the Appalachian range into Georgia, breeding at the higher elevations.

Blackburnians rarely descend from their lofty domain during the breeding season. Males perch at the very tip of the tallest spruces to sing their high-pitched, sibilant songs. Both males and females can be found hovering to pluck caterpillars and other insects from among the spruce needles. Nests are placed high in those same trees, up to 85 feet above ground, hidden in dense foliage or in Usnea lichen (a sort of northern version of spanish moss).

Perhaps because nests are so high, the warbler is an uncommon victim of Brown-headed Cowbird (Molothrus ater) parasitism. In 1885, C. Hart Merriam reported a Blackburnian nest that was 84' high and contained a cowbird egg. This nest holds the "altitude record" for cowbird parasitism! However, also because of the nesting height, we still know very little about the breeding ecology of the species.

A bona fide member of the "spruce-woods warblers" made famous by Robert MacArthur, the Blackburnian Warbler uses the upper and outer portions of coniferous trees, perhaps to avoid competition with other closely-related species (e.g., Black-throated Green and Yellow-rumped warblers).

Though the warbler feeds on outbreaks of spruce budworms, Blackburnian populations in Maine were found to decrease rather than increase during budworm irruptions. Reasons for this are not known, but could be related to increased competition from other, dominant budworm-specialists like Bay-breasted and Cape May warblers.

The best time to see Blackburnian warblers may be during migration or on wintering grounds when they forage at more "reasonable" heights. In fact, despite the difficulty in spotting singing males, Blackburnians are relatively tame and tolerant of close viewing.

Blackburnians winter farther south than most Neotropical migrants, with the center of their winter range occurring mostly in the Andean highlands from Venezuela to Peru. Here they forage at many heights, even on the ground, eating insects and some berries. They also will often join mixed flocks of warblers, tanagers, and other tropical species. In the highlands of Costa Rica and Panama, Blackburnians are fairly common among the migrants in shade coffee plantations.

According to the Breeding Bird Survey, the continental Blackburnian Warbler population has remained relatively stable over the last 32 years. Large-scale plantings of jack pine (Pinus banksiana) in boreal forest areas may provide substantial habitat for the species.

However, populations in northern New England have declined by as much as 9% per year since 1980. Unfortunately, we should anticipate future problems for this species because it appears to depend upon forests throughout its breeding and wintering ranges.

Recent rapid deforestation of the Andean regions of South America can only have a negative impact on this long-distance boreal migrant. Yet, until we learn more about the ecology of this species throughout its range, conservation biologists will be ill-equipped to respond if the species begins to exhibit a downward trend.