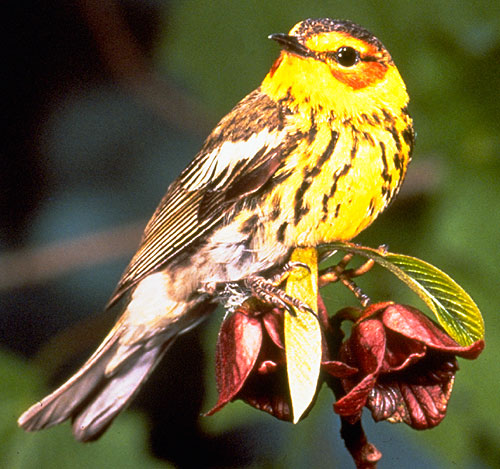 At top speed, a needle-like bird beak, flared with chestnut and horns of gold and followed by bright black-and-yellow tiger stripes, hurtles towards its target. This is the view that many birds have of the beautiful but aggressive male Cape May Warbler as it chases all comers from a favorite tree.

Birders usually gain a very different view of this bird. Patient observers are well rewarded when they glimpse a Cape May giving its simple sibilant song from the top of tall tree. The Cape May Warbler is so named because it was first collected at that world famous New Jersey migration site in 1811. However, the species is most characteristic of the northern boreal forest, from Maine to the Northwest Territories, in the summer and the woods, gardens and plantations of the West Indies during the winter months. It is better described by its Latin name tigrina reflecting the tiger striped appearance of the adult male.

The adult male retains this plumage throughout the year, but the facial colors are partly obscured by green feather edgings that wear as spring approaches. Females and young are often dull olive brown and streaked with only a pale yellow rump and a hint of the yellow neck patches to remind us they are indeed Cape May Warblers.

During the brief summer breeding season, Cape May warblers are patchily distributed in forest of spruce, fir or jack pine conifers becoming particularly common at outbreaks of the spruce budworm. The late Robert MacArthur, a pioneer of warbler ecology, demonstrated that this species (along with a few others) increases its clutch size when breeding during these outbreaks. When defending territories at these outbreaks, male Cape May Warblers can be quite aggressive chasing larger warblers, such as Yellow-rumped and Bay-breasted.

Cape May Warblers commonly feed on nectar or fruit during the non-breeding season. Because of this dietary preference, they are commonly found in gardens or shade coffee plantations, where flowering plants are abundant. Cape May Warbler's have strikingly narrow bills for inserting into flower corollas, or puncturing the sides of flowers to rob nectar. In addition, it is reported that Cape May Warblers have semi-tubular tongues which increases the efficiency of the uptake of nectar through capillary action.

This aggressive species is well known for defending certain flowering plants from all other small birds. One study reported that Cape May Warblers defended flowering mesquite from other birds, mainly Northern Parulas, through long-distance chases every 10 or so minutes.

Data from the North American Breeding Bird Survey indicate that Cape May Warblers have been declining since the late 1970s. Similar declines have been reported for banding stations as well. The most likely explanation is that the population is responding to declining numbers of spruce budworms in eastern Canada (although outbreaks continue in western Canada). Since budworm populations are cyclical, we can expect Cape May Warbler numbers to increase in coming years.