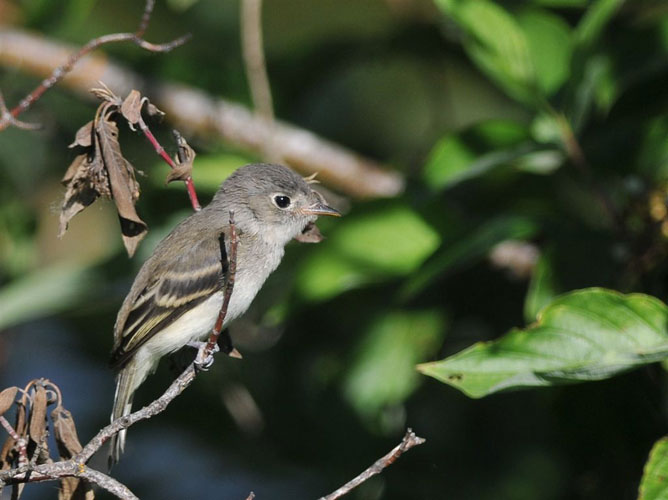 The least flycatcher spends most of its life in the lowlands of Mexico and Central America. It is easy to overlook with its drab coloration and size. It is only 5 inches long and weighs about the same as 2 nickels.

In fact, the best way to find one might be to listen for its oft-repeated song or call. Weedy cattle pastures, scrubby areas, forest edges, and even coffee plantations are among the scrubby habitats where it will set up its territory.

It leads a solitary life, eating insects and occasionally fruit or berries. In forest patches it is replaced by its cousin, the yellow-bellied flycatcher and at higher elevations (more than 1,000 meters) by its other cousin, the Hammond's flycatcher.

The least flycatcher has a lot of cousins. And they all look very similar.

Even bird banders have trouble telling them apart by looks alone and they are holding the bird in their hands! They'll often measure the longest primary feather and subtract the measurement of the longest secondary feather. And sometimes even that does not help.

Speaking of feathers, the least flycatcher is a little unusual in that it molts after its fall migration, when it is on its winter grounds. Most birds molt before they migrate but perhaps the least is in a real hurry to avoid any cold weather.

Although they spend most of their lives south of the border, they do migrate north to breed. From May to July, least flycatchers can be found in deciduous forests across Canada and the northern United States.

But they have a very strange distribution. They are either really common, or absent, or both. Both? Let me explain. At our study site Hubbard Brook in New Hampshire, least flycatchers were the most common bird in the 1960s. But by the 1980s they had completely vanished.

We're not entirely sure why, but they may be sensitive to changes in habitat and competition with other birds (e.g. redstarts).

But where they can be found, they occur almost on top of each other. They are highly gregarious during the nesting season. They enjoy each other's company so much that, not surprisingly, a bit of hanky-panky occurs. In most of the nests, the male defending the territory, and feeding the young is not the father of all the chicks.

Another benefit of nesting so close to each other is a warning system when predators are near. As you heard in the audio link at the top of this article, least flycatchers are very noisy. Nests located near the center of the group are 34-38% less likely to be predated than those at the edge.

A hermit for most of the year, a philanderer for the rest, the least flycatcher certainly has a changeable personality.