The Hummingbird Diet: How To Gain Weight And Keep It 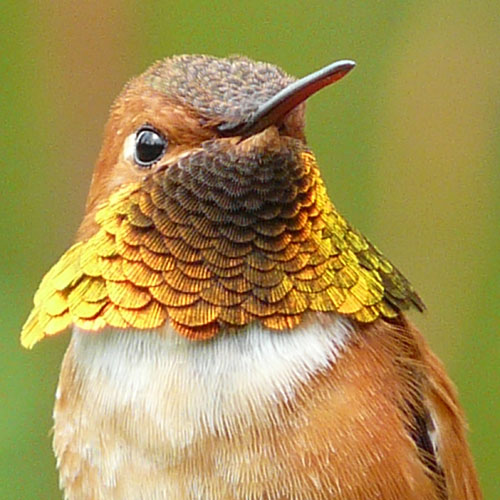 Like a sumo wrestler, the rufous hummingbird must rapidly gain weight and keep it on, despite extraordinary physical exertion.

Weighing in at a little more than a penny, it must double its body weight in order to fuel its migration from breeding grounds in the Pacific Northwest (Alaska to northern California) to wintering grounds in central Mexico.

But gaining weight and keeping it on is a challenge because hummingbirds have very fast metabolisms and expend an extraordinary amount of energy while flying, especially as they hover when feeding. In addition, they are so tiny that they lose heat rapidly, more so during cool weather. Just by sleeping, a hummingbird can lose 10% of its body weight in a night!

So how does this hummingbird gain and maintain enough weight to sustain its long migratory flights? The rufous hummingbird can enter a state of torpor where its body temperature cools, its metabolism is greatly reduced, and its breathing is greatly slowed. In this state, it only loses 1% of its body weight during the night.

During the day, the hummingbird spends much of its time perched, standing guard over its favorite patch of flowers where it gets its boosts of energy-rich nectar. Hummingbirds fly as little as possible, mostly to feed and to chase off intruders.

The rufous hummingbird is tiny, less than 4 inches long, with the females being slightly larger than the males. The males have an iridescent copper-colored throat patch, a rusty-brown head, body, and tail, a white chest and belly, and dark wings.

Some males, presumably younger birds, have more green on top of the head and on the back. Males are often first detected by the musical trill their wings make when flying.

Females and immatures are less brightly colored with a few iridescent flecks in the throat, large white spots in the tail, and a green head and back. All birds sport a narrow, needlelike bill which they use to probe into flowers for nectar and as a weapon to chase off intruders.

Rufous hummingbirds seem to know just how many flowers they'll need to forage from in order to get enough food. If they are in an area with abundant flowers, their territories can be quite small, but if the flowers are few and scattered, their territories are likely to be much larger. When scientists studying this bird put a blanket over some of the flowers in one hummingbird's territory, the bird expanded its territory to compensate.

Competition for flowers is intense, both with other hummingbirds, other birds (e.g. Orange-crowned Warblers) and many insects. Its easier to protect the center of the territory than the fringes so the hummingbird feeds heavily at the edges of its territory at dawn and dusk in order to deplete the amount of nectar that is most accessible to thieves and concentrates its efforts on the center of its territory during the rest of the day.

The migration pattern of the rufous hummingbird follows an elliptical pattern to take advantage of seasonally available flowers. The extremely early (beginning in February) spring migration goes through California and follows the west coast while the fall migration occurs along the Rocky Mountains through the interior west. Many of the scientific studies of this bird have taken place during the southbound migration.

Males typically migrate earlier than females. In spring they arrive earlier in order to stake out the best breeding territories, while in the 'fall' (July) they're free to leave earlier because they take no part in raising the young.

Although not endangered, the breeding population of rufous hummingbirds has been declining. The Breeding Bird Survey (conducted from late May to early July) reports an average annual decline of 2.7% from 1966 to 2001. However, the number or Rufous hummingbirds spending the winter in the United States has been rising at a fantastic rate, especially along the Gulf Coast.

In Louisiana, the winter of 1965-6 produced 0 rufous hummingbirds during the Christmas Bird Count season (mid December to early January) while last year's counts (2001-2) recorded 172! Enthusiastic bird watchers have kept their hummingbird feeders up during the winter and planted a variety of late fall and early winter blooming flowers to entice this lovely bird to spend the winter in their yard.

Conventional wisdom held that rufous hummingbirds away from their Mexican wintering grounds were lost or injured and would soon perish. But many of them have returned year after year to the same yards as in years past. Some people believe that there have always been a few rufous hummingbirds around in the winter, perhaps surviving cold spells by feeding on sapsucker wells (both on the sap and on the insects attracted to it) while others think these birds are dispersing north from wintering grounds in Mexico.

Scientists hope to gain insight into this mystery by capturing, tagging (with a numbered metal band), and releasing hummingbirds across the eastern United States. These efforts are meeting with some success. A rufous hummingbird captured and banded in Richmond, Virginia in November 2001 was recaptured in August 2002 in Montana.