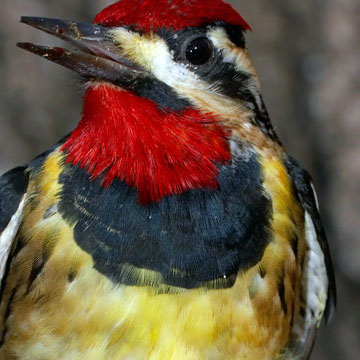 Although its name sounds like an insult Yosemite Sam might sling at Bugs Bunny, the yellow-bellied sapsucker's moniker aptly describes its appearance and habits. Both males and females indeed have a pale yellow underside, and tree sap constitutes a large portion of this woodpecker's diet.

In fact, sapsuckers have mastered the difficult craft of making sap flow abundantly from trees. This rare ability makes these hard-working, master craftsmen a desirable neighbor for many other sap-loving animals.

The tell-tale sign of a sapsucker's presence in an area is trees with multiple rows of squarish holes bored into the trunks and limbs. Sapsuckers spend hours laboriously drilling these holes to get at the sap, which they lap up with their brush-like tongues. In the summer, sapsuckers feed on the 'phloem' sap, the sticky fluid that carries the nutrients produced in the leaves downward to other parts of the tree.

Methodically, the birds begin by making a few horizontal rows of holes. This wounds the tree and causes phloem sap to dam up, accumulating in the plant tissue just above the wound. The holes are enlarged over the course of several days as the sapsuckers extract the sap, and then new ones are added on top of the old, resulting in long vertical lines of holes.

Like any good forester, sapsuckers are selective in using particular trees over others, and they invest a lot of time in managing trees for both current and future use. They are known to feed on as many as 1,000 different species of trees, although they show a preference for certain species within a given area. Birches, sugar maples, and scotch pines are a few common favorites.

They often will select individual trees that are wounded or weakened, such as from insects, disease, lightning, or wind. The reason for this may be because the sap of trees in poor health contains higher levels of amino acids and protein.

Because sap is as vital to trees as blood is to humans, trees have developed means of sealing over wounds to prevent sap from being lost. Despite decades of experiments and observations, researchers still do not know how sapsuckers manage to overcome a tree's defenses and get the sap to flow so copiously. One researcher diligently tried to copy the sapsucker's drilling technique, but succeeded only in enhancing her appreciation for the birds' abilities because she could not get sap to flow.

It is thought that sapsucker saliva may contain a substance that acts as an anticoagulant that prevents sap from clogging up and sealing over the holes the bird creates.

For those of you reading this and thinking it can't be that hard to get sap to flow because people harvest huge quantities of sap each year to make maple syrup, you need to know that there are two kinds of sap. The sap that's readily tapped in early spring for maple syrup is 'xylem' sap, a thin liquid that carries water and little nutrients from the roots upwards to the leaves.

Unlike the nutritious phloem sap that sapsuckers feed on in the summer, xylem sap is extremely dilute (it's mainly water) and moves through the tree's vessels more quickly and at higher pressure, and thus flows more freely when tapped.

Because sapsuckers are one of the few animals capable of maintaining a flow of nutritious phloem sap from trees, they make very desirable neighbors for a host of other animals that find the sap wells irresistible. Bats, squirrels, porcupines, and many types of birds including warblers, hummingbirds, nuthatches, and other woodpeckers are among the throngs of critters that will eat sap made available by the sapsuckers. Most of these animals will also eat the many insects that are attracted to the sap as well.

Ruby-throated hummingbirds that breed in parts of Canada are especially beholden to the sapsucker because if it weren't for their sap wells, these nectar-feeders would probably not be able to survive so far north. Tree sap is similar to flower nectar in the amount of nutrients and sugar it contains, and thus is a very suitable nectar substitute in areas where flowers are scarce.

It is thought that ruby-throats, and possibly rufous hummingbirds as well, time their springtime arrival in Canada to coincide with peak sapsucker activity, and that the northern limit of their breeding ranges is determined by the presence of this woodpecker.

The yellow-bellied sapsucker is the jet setter of the woodpecker clan. From late March through September, they can be found in young forests from southeastern Alaska across Canada and the northeastern United States (smaller, more localized breeding populations exist in the Appalachians as far south as Tennessee). In the fall, all yellow-bellied sapsuckers take to the skies and travel to the southeastern United States, Mexico, Central America, or the West Indies for the winter.

As if taking separate vacations, females tend to travel farther south than males do in the winter. If you see a sapsucker in Mexico, Central America, or the West Indies, there's about a 75% chance that it's a female, whereas a sapsucker in Maryland is almost certainly a male. Presumably this is because of the springtime pressure on males to get to the breeding grounds and establish a territory as early as possible.

They also do the lion's share of feeding the young. In fact, males are more apt to succeed at single parenting. If one parent dies while young are in the nest, the young are more likely to survive to fledging if raised by the father.

Raising a brood of sapsuckers is time consuming and labor intensive. It takes 1 to 4 weeks of chiseling before the cavity is ready to serve as a nursery. 1 egg per day is laid until there are between 2 and 7 eggs amidst the sawdust and wood chips that line the nest. After 2 weeks of incubation, the young woodpeckers hatch and almost immediately begin their incessant, raucous vocalizations that can be heard 100 yards or more away.

The harried parents struggle to quench the nestling's insatiable appetites with insects dipped in sap. 3 to 4 long weeks later, the young are physically ready to leave the nest; however they are sometimes reluctant to do so. In such instances, parents have been observed coaxing the young by dangling food just beyond their reach.

Yellow-bellied sapsuckers possess many admirable qualities. A strong work ethic is evident in the yellow-bellied sapsucker's dedication to raising young and their diligence in drilling sap wells. They are adventurous, international travelers, skilled craftsmen, and they make a positive difference in their communities—such commendable behavior, despite the cartoonish name.