A Migratory Bird with Sexual Equality? 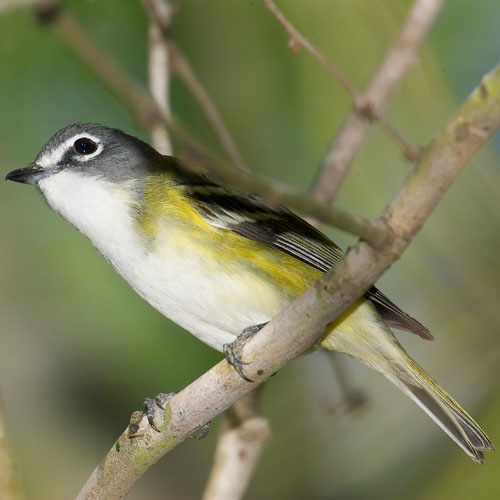 This species is well named for its blue-gray head that contrasts with white 'spectacles' yellow sides, white wing bars, a greenish back and white belly and throat. However appropriate the name, birders may find the process of naming this vireo confusing.

It is clearly the victim of changing taxonomic knowledge and philosophy. If you learned to identify birds in the 1950's, popular bird identification guides listed the blue-headed vireo. Then Blue-headed disappeared from the field guides because it was joined with two other western vireos, the plumbeous and Cassin's vireos, and all were called Solitary Vireo.

In 1997, the blue-headed vireo reappeared as a distinct species when molecular genetic studies demonstrated differences among the Solitary Vireo complex. Perhaps the confusion is over, but Cassin's Vireo in Alberta and British Columbia might be once again lumped with the blue-headed because they are very similar.

Blue-headed vireos breed in a wide swath across Canada and northern U.S. then south through the Appalachian Mountains from southern Pennsylvania to northern Georgia. Appalachian breeders (subspecies alticola) are slightly larger, with darker backs and little contrast between back and head, compared to northern birds (subspecies solitarius).

The larger southern birds move only short distances to wintering areas from southeastern Virginia across Gulf Coast states to Texas. The true neotropical migrants are the solitarius which overwinter in eastern and southern Mexico and northern Central America.

On their winter grounds, solitarius are characteristically mid-elevation birds, fond of oaks and pines and found most often in the company of other small birds in mixed species flocks. Even though they are attracted to other species, they appear to hold individual (or perhaps pair) territories, advertising it with a guttural chatter, during their long tropical stay.

By mid-April males arrive and defend huge territories, and are followed shortly by females. Most individuals are paired and nesting by the time the first waves of warblers arrive in early May. After an early arrival, blue-headed vireos settle in for a long summer.

Males sing on their breeding territories until mid to late October, longer than the vast majority of migratory songbirds. Furthermore, female blue-headed vireos initiate nests from early May until early August, also longer than other migrants.

Territories range from 1.5 to 6.5 hectares (1 hectare = 10,000 m² or 2.2 acres). Males endeavor to control as much real estate as possible because arriving females choose to pair with males holding the largest territories. Undecided females roam to the edge of a territory and force neighboring males to fight it out. Unlike most migratory songbirds, females are as large as or slightly larger than males, and this is a bird where the females truly are in charge.

To be a successful male, land is not enough. Holding on to a choosy female requires males to build a 'courtship' nest, presumably to show the female he will be good at domestic chores. These courtship nests are often abandoned, though, after a pair-bond is established, and another location is often chosen for the first breeding nest.

Nests are easily located by researchers because each male repeats an individually distinctive, yet monotonous single phrase such as 'jodi' in the nest vicinity. This nest song identifies a male to his mate and helps to maintain their bond. In contrast to the nest song, the territorial defense song consists of 6-22 different phrases, one following another, at the rate of 20 to 30/min, in a stereotypic fashion. At a given site, males share most song phrases, but each bird has a slightly different repertoire of additional phrases.

Blue-headed vireos prefer to breed in forests of both deciduous and evergreen trees. Because the deciduous trees have not leafed out when the vireos arrive on their breeding grounds, most courtship nests and first breeding nests are built in evergreen hemlock trees.

Their dependence upon hemlocks may prove troublesome for the vireo because this common tree is being decimated by an introduced Asian insect, the hemlock wooly adelgid (an invasive pest that has killed vast numbers of hemlock trees in the eastern United States). After deciduous trees, such as maples and oaks, are in leaf, blue-headed vireos expand their preference to include many other tree species, placing their nests about 1 - 5 meters above ground.

The cooperative nesting behavior of blue-headed vireo pairs is unusual among migratory birds. Male vireos build nests and incubate eggs as much or more than their mates. Although only males sing, both sexes are highly vocal and continually give soft whinneys, squeaks, and 'chir' calls to one another as they forage together.

Also unusual among migratory birds is the fact that females do not accept or attempt to gain extra-pair fertilizations, even though males do not guard females against other males (most species of migratory birds are quite promiscuous). There is the intriguing possibility that like a few other species of tropical migrant songbirds, male and female Blue-headed Viroes stay together on wintering territories. The nature of these associations is unknown and the frequency of their occurrence needs further documentation

Nesting success is low (only 10-30% of nests produce young) and many pairs try 3-5 times a year to fledge young. The fate of most blue-headed vireo nests is to feed predators such as blue jays, crows, and squirrels. Blue Jays are attacked vigorously by coordinated assaults from blue-headed vireo pairs.

One vireo swoops at the head of the jay from one side and the other vireo immediately hits the jay from another direction, with both birds chatter-growling rapidly at the same time. Successful jay predation is due to stealth, not confrontation with vireos. The presence of nearby nesting Cooper's Hawks may protect vireos from predation by jays and crows because Cooper's Hawks eat jays and crows.

The vireo's nests are also the only game in town for parasitic Brown-headed Cowbirds in early May. In fact, 10 or more cowbirds will compete to lay in a vireo nest Worse yet, whereas many birds can rear some of their own young with a cowbird, this rarely happens in the deeply cupped vireo nest. In these deep nests, cowbird nestlings completely cover the vireo nestlings, which then die through starvation.

Despite the many obstacles facing blue-headed vireos during the breeding season, this species appears to have a long life-span compared to other migratory songbirds. For example, one male banded on our Pennsylvania study site in 1995 was still alive and breeding in 2002. This long life may allow the vireo to make up for poor nesting success in any one year.

If you ever find a blue-headed vireo nest, you will be amazed how tame the birds appear. You can easily walk right up to the nest to take close-up photos! Very puzzling, though, is the behavior of females when they have nestlings. The old adage that female birds will abandon any young handled by a human is generally a myth; but it does hold true for blue-headed vireos. Her mate is then left trying to feed the 3-4 nestlings, often unsuccessfully. However, the female must actually see the act. If she is captured and placed in a paper bag where she cannot see the nest, she will not abandon the young.

Like most migratory songbirds, it is the availability of caterpillars that draws blue-headed vireos to temperate forests to breed. Many moth caterpillars are easily captured, easily digested packages of protein for raising young. Vireos are known for short bills and strong jaw musculature (for a songbird) and these are used by adults to capture and process prey with hard carapaces ' particularly Hemiptera (true bugs) and beetles. Blue-headed vireos will also eat fruit, especially during migration and on their tropical wintering quarters.

The sweet, slowly delivered blue-headed vireo song is one of the distinctive pleasures of visiting the mixed forests of eastern North America or the coniferous forests of Canada. Its song contrasts with the harsh phrases of its close relative, the yellow-throated vireo in much the same way that the clear tones of a clarinet differ from the throaty phrases of a saxophone.

Both of these vireos come to mind when listening to the curiously intermediate song of the yellow-winged vireo, a resident of the mountains of Costa Rica and adjacent Panama. Perhaps this tropical vireo is the ancestor of both our eastern wing-barred vireos. Or maybe it's the other way around. Either way, each spring the blue-headed vireo brings a taste of the tropics to some of our favorite woods.