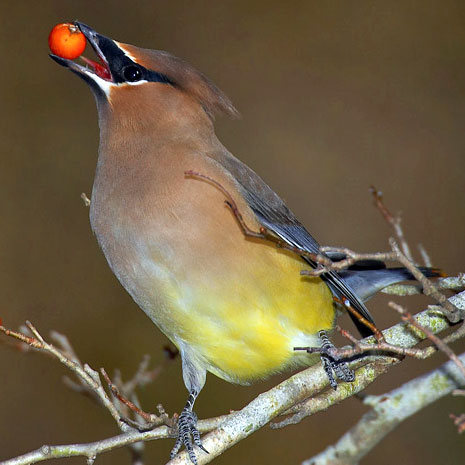 Like a centurion standing guard, the Cedar Waxwing strikes a commanding pose with its natty garb and erect profile. It's very name, Bombycilla , speaks of well-kempt fashion. "Bombux" or "bombukos" comes from the Greek root for "silk". The "cilla" comes from Modern Latin, and (mistakenly by Viellot, who borrowed it from the wagtail, Motocilla ) was used to mean "tail". So the Cedar Waxwing is the "silky tail of the cedar", often posing in military style atop its namesake tree.

This staid and proper image contrasts sharply with this beauty's propensity toward over-eating and constant chatter. Referred to over the decades as "glutton," "gourmand," or, in a more scientifically inclined descriptor, "intensive forager," Cedar Waxwings have been reported to devour an entire fruit crop of red cedars (Juniperus virginiana) over a two-day period. Such feats have earned it an alternative name, the "cedar bird," and led to the proposition that it is an important seed disperser of red cedar, a common woody species in eastern North America. It is also known as the cherry-bird, the Canada robin, and the southern waxwing.

But if fruits are its mainstay, insects present this sleek epicurean a veritable buffet during summer. Elm leaf beetles, weevils, carpenter ants, sawfly larvae, cicadas, scale insects, caterpillers form a part of the Cedar Waxwing's diet, as well food for young nestlings. They are excellent flycatchers, too. A particularly favorite fare is the cankerworm, the quantity of which could be eaten by a flock of 30 birds in a single month has been estimated at 90,000 worms—a modest estimate, given the Cedar Waxwing's voracious appetite.

Indeed, they are "such gluttonous birds that they sometimes become so surfeited as to be unable to fly, and have been known to fall helpless on the ground," as Edward H. Forbush wrote 1929. Birds examined after feasting on the blue-glaucous cedar berries have been found to have their stomachs and throats full of berries, with others in their mouth waiting to be swallowed. Such crapulence finds counterbalance in the bird's intriguing social behavior around food. Several Cedar Waxwings sitting in a row will pass a berry or insect from one to another up and down the row until finally one bird decides to swallow it.

Visually, Bombycilla cedrorum presents a striking portrait from Nature's library of colors. As Forbush wrote, "who can describe the marvelous beauty and elegance of this bird?" He, in fact, did rather well after asking what other [bird] is dressed in a robe of such delicate and silky texture? Those shades of blending beauty, velvety black, brightening into fawn, melting browns, shifting saffron, quaker drabs, pale blue, and slate with trimmings of white and golden yellow, and the little red appendages on the wing...

It is those red appendages, the vibrant "sealing wax" at the end of the secondaries, that give both sexes of the Cedar Waxwing (as well as the Bohemian waxwing) its most widespread common name. The drops of wax are actually flattened extensions of the feather shafts, the color of which derives from astaxanthin, a carotenoid pigment. The precursor for this coloration is thought to be dietary in origin. The function of these knobby red globs has been the subject of much speculation over the years. Most writers historically have simply stated that "their use is unknown." But some have ventured various adaptive significance stories for the unusual features.

One theory held that the waxy endings were intended to preserve the ends (and therefore the vanes) of the quills, protecting the feathers from being broken and/or worn away. Close study, however, finds no basis for such an hypothesis. Research from the 1980s maintains that the sealing wax tips on the secondaries serve as markers in mating, providing visual cues to potential mates about each other's age. Age, in turn, correlates with egg size, clutch size, ability to find and deliver food to both the nesting female and the very young (the male's job), and overall reproductive success. The end result is that an "associative mating" based on age occurs, with younger birds (displaying fewer red wax drops) and older individuals (with more red wax drops) tending to bond and mate with individuals of their own age (no mid-life crises here!). The side hopping observed in courtship supports such an hypothesis, behavior that would allow individuals to assess the relative number of red appendages on a potential mate.

The Cedar Waxwing qualifies as an erratic winter resident in the US, sometimes moving long distances like a bona fide neotropical migrant, and sometimes lingering at its higher summertime latitudes, where it spends the winter taking advantage of a bountiful fruit crop. A facultative migrant, Bombycilla cedrorum makes a long trek only when and if it suits its purposes. As one of the most heavily frugivorous birds in all of North America, the Cedar Waxwing dines from a buffet of fruits and berries that includes plants such as mulberry, cherry, privet, yew, toyon, hackberry, and choke cherry.

Nesting as far north as southeast Alaska and across Canada to Newfoundland, it also breeds south to California in the western US across the continent into northern Georgia. Nesting habits tend toward being colonial, with nests often found in clumps. Territoriality, except around the nest site itself, is minimal to non-existent. Its wintering grounds overlap substantially with the breeding areas, the range being from southern Canada to to Gulf coast and central Florida. Irregular observations are reported from Panama, with casual migrations as far as the West Indies and northern South America.

So hearty is their appetite that, in 1908, lobbying fruit growers in Vermont succeeded in getting a bill passed in the Assembly allowing them to shoot Cedar Waxwings as an agricultural pest. Even though arguments citing its economic importance as a bio-control agent in eating insects were made vigorously, the bill passed. At the Senate level, however, opponents of the bill forsook the arguments and simply brought in specimens to show the legislators. Beauty won the day and the bill went down in defeat. Today, the Cedar Waxwing is protected by national legislation.

The Cedar Waxwing prefers forest "edges" or open woodlands as a general habitat. More than half of nest sites have been shown to occur in maple or cedar trees. Data from the Christmas Bird Counts show that the highest population densities of B. cedrorum correlate with juniper (cedar) distribution. Given the forest fragmentation currently witnessed throughout much of the US, habitat for Cedar Waxwings may in fact be increasing, a speculation supported by the fact that their numbers are holding steady and may even be on the increase.