One Small Tern Deserves Another 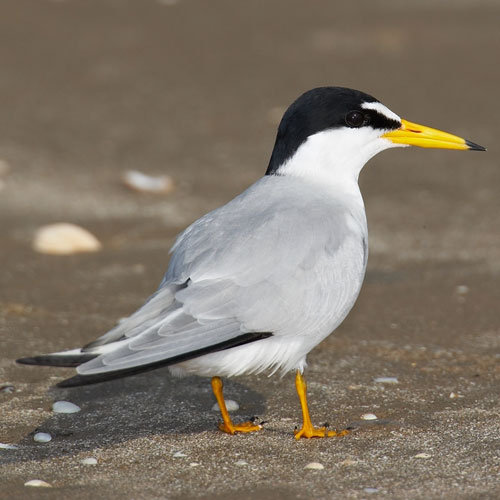 This tiny tern once was considered the perfect size to adorn ladies' hats during the late 1800s. Least terns were collected by the thousands from the Atlantic coast for this decorative purpose, only to frighteningly diminish their numbers.

Although the hunting of least terns has been outlawed, today they are listed as endangered or threatened throughout their range—the new threat, habitat loss.

Colonies of up to 500 seasonally monogamous pairs nest in open areas near fresh or salt water such as on exposed salt or mudflats, river sandbars, or sandy beaches. They have even been known to nest on graveled rooftops!

The decline of the least tern's natural habitat is contributed to by the flooding of nesting sites caused by reservoir and dam construction as well as channelization projects. Brush and tree overgrowth also subtract from remaining habitats, making these areas unsuitable for use as nesting sites.

Terns nest where people play. The increase in recreational use of sandbars is another major threat to the tern's reproductive success. People often disrupt breeding attempts either by harvesting eggs, inadvertently destroying nests and killing eggs or chicks by stepping on them or by running them over with off-road vehicles. Jet skis causing increased turbidity in shallow waters may also decrease tern foraging success.

The least tern is found along the Pacific and Gulf coasts, and along large rivers in the central United States. This bird is the smallest member of the tern family (smaller than a robin), with a wingspan of 20 inches (50 cm).

The tapered, pointed wings, back, and forked tail are grayish in color. The slender body has a gray mantle and snowy white undersides.

Least terns can be distinguished from all other terns by their small size and combination of a black crown and eye stripe with a white forehead. The pointed bill is yellow with a black tip during the breeding season but changes to a dusky gray, blackish, or dull, yellow-orange color outside of full Definitive Alternate (adult breeding) plumage.

The yellow legs of mature birds are relatively short, with webbed to partially webbed feet. First-summer birds are distinguishable by their dark bills and legs, with a black line though the eye, and a dark shoulder bar.

Least terns eat mainly fish, although invertebrates such as crustaceans and insects are also taken. They fish in shallow water, very close to shore, hovering longer than other terns and plunging to the surface, without submerging, to capture their prey.

Nests are shallow scrapes in the sand, soil or gravel, and sometimes under low bushes. Both males and females construct several scrapes, which are formed by sitting on the substrate and kicking their feet while rotating their bodies. Ultimately, the female chooses the scrape that will become the nest.

Within two days of nest construction, two or three eggs colored similarly to the ground (beige to light olive-brown hues, with brown or black splotches) are laid. There is great variation within clutches in respect to the number, size, and spotting of the eggs.

Although both parents care for the eggs during the incubation period, females do more than their share. During excessively hot weather, parents may soak their bellies in water and drip it onto the eggs, or chicks, as a method of cooling them. The young are fairly mobile, able to walk and swim, soon after hatching.

At 2 days of age, the young are capable of leaving the nest. The coloring of their down varies considerably within and among broods, from a "dry sand," tan color to a "wet sand," spotted or streaked, camouflaging appearance.

Both parents feed the young and will travel up to 4 or more miles (6+ km collecting 2 fish/hour) from their breeding colonies to find the small fish that make up the major part of their diet. The young experience their first flight at about 20 days of age

The parents stay with the young until fall migration. During the late summer, before migrating south, adults and young congregate at prime fishing sites along waterways. Then move south in small, loose groups which follow major rivers and coasts, feeding along the way.

Usually leaving breeding areas (U.S., n. Mexico, and Caribbean islands) in late summer or early fall, birds winter in Central and South America, though rarely, some birds may remain on the Pacific and Gulf shores.

The wintering habits of this bird are poorly known. Further research is needed in this and other areas, including determination of population trends and specific habitat requirements. Developing public awareness of the problems faced by least terns through educational programs may be key to the survival of this species.