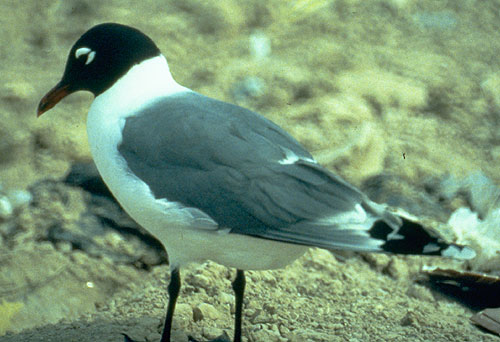 When first described by scientists in 1830, this species was named the “Franklin's Rosy Gull” for its rose-colored breast and belly.

However, for those of us familiar with the seagulls of the coast, this beautiful and delicate gull seems more aptly named the “Prairie Dove” as dubbed by the early settlers.

Nesting primarily along lakes and marshes in the northern prairie regions of central Canada and north-central United States, Franklin's gulls have in recent decades expanded their breeding range southward to include a few lakes in the Great Basin and Rocky Mountain regions.

They often nest in large colonies which are susceptible to human disturbance and local reductions in water levels caused by drought and drainage projects. Because of these pressures, colonies may abandon traditional nesting grounds in favor of other sites or possibly not nest at all.

Among the gulls, the Franklin's are one of the world champion long-distance migrants. After nesting, they undergo a complete molting of their feathers, then fly south to the coast of Texas, and continue south along the Caribbean coast of Mexico to the Isthmus of Tehuantepec. From there they make an overland flight across to the Pacific Coast which they follow all the way to southern Peru and northern Chile.

After spending the winter there, they undergo another complete feather molt, and follow the same migration route in reverse. The 2 complete feather molts, which is unique among the gulls, is an adaptation for long-distance migration. The gulls need new, strong feathers in order to meet the demands of their 5,000 mile flights.

During their fall migration, Franklin's gulls have formed some of the largest flocks of gulls known. Groups of over 1 million have been noted in the Great Plains, and birders in south Texas in late April often experience flocks moving southward in a constant stream.

Unlike other large groups of gulls, these birds, in the non-breeding season, assemble in large flocks for migration, whereas concentrations of other species are primarily centered around garbage dumps, fish canneries and other sources of food. Many of these species' populations have increased dramatically with the increase in these human-created gull “feeders”.

Franklin's gulls on the other hand, depend more on insects and other invertebrates for food (and increasingly when insects are scarce, crops such as sunflowers seeds), and so are more strongly tied to available nesting marshes and agricultural areas.

It is not known whether their populations have increased because of the development of agriculture. However, it is thought that their populations have rebounded from decreases during the drought and dust-bowl years in the 1930s that dried some wetland nesting sites. Local declines in populations are probably due to local conditions of the marshland breeding habitat.