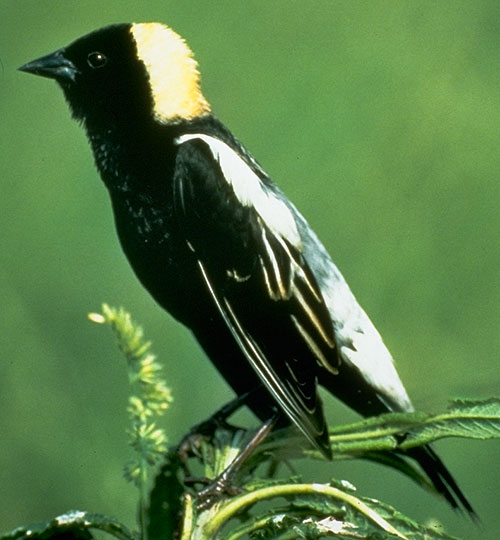 Rice bird, meadow-wink, skunk blackbird, reed bird, butter bird—these various names for the member of the blackbird family most commonly known as the bobolink reflect the diversity of ways in which humans have looked upon this gregarious songbird.

The bobolink has been the source of inspiration for a classic poem by William Cullen Bryant, a much despised target of rice farmers' ammunitions, a sought-after menu item, and a popular commodity in the pet trade. Aside from these human considerations, bobolinks are remarkable in their own right as long distance migrants, ebullient songsters, and polygamous breeders.

Bobolinks were dubbed rice birds before the turn of the century when rice production was a thriving industry in the southeastern United States, principally in Georgia and South Carolina. Huge flocks would descend upon the rice fields while on migration to fatten up for the remainder of the trip. Since they were capable of doing great damage to the crop, they were shot and otherwise killed by the hundreds of thousands.

In 1912, a South Carolina game warden reported that in a single year, over 720,000 rice-birds had been killed and then shipped from the port of Georgetown to market, where they were sold as food. Known as reed-birds in the northeastern U.S., bobolinks also were slaughtered there to be served in restaurants. Bobolinks are still collected as food in Jamaica, where they are called butter birds—a commentary on how fat they are as they pass through on migration.

Judging by either sight or sound, the bobolink is a bird of distinction. Their song has been vividly described as "a bubbling delirium of ecstatic music that flows from the gifted throat of the bird like sparkling champagne," "a mad, reckless song-fantasia, and outbreak of pent-up, irrepressible glee," and as "a tinkle of fairy music, like the strains of an old Greek harp."

In breeding plumage, male bobolinks have a solid black face, underside, outer wing feathers, and tail. The back of their neck is buffy-yellow, and the shoulders and rump are white. This unique coloration pattern makes the breeding male appear as if it is "wearing a tuxedo backward," and it prompted the name skunk blackbird.

In non-breeding plumage, males resemble the females, which are buffy overall, with dark stripes on their back, rump, sides, and head.

In a songbird hall of fame, the bobolink would be noted for one of the longest migrations in the western hemisphere—a round trip of approximately 20,000 km (12,400 miles). Bobolinks nest in hayfields and meadows across the northern United States and southern Canada during the northern summer months of May through early July.

They migrate to the vast grasslands of southwestern Brazil, Paraguay, and northern Argentina to spend the austral spring and summer months of November through March.

Relatively small numbers may winter along the coast of Peru and Chile. By traveling to temperate latitudes on either side of the equator, bobolinks have what warm weather lovers might call the best of both hemispheres.

Bobolinks migrate at night. The distinctive "clink" notes of these nocturnal travelers can be heard as they pass overhead in large flocks, apparently using the earth's magnetic field as a compass and the locations of the stars as a map.

Bobolinks begin their journey northward in South America in early March, reaching Colombia and Venezuela in late April. From there, most take a route over the Caribbean Sea to the Florida peninsula, although some will cross the Gulf of Mexico from the Yucatan Peninsula to Louisiana and Texas. From there they fan northward and westward, arriving on the breeding grounds in May.

One of the most interesting features of the bobolink's breeding behavior is the tendency for some males to form a pair bond with more than one female in a single nesting season. Some males may have up to 4 females nesting simultaneously in their territory—an arrangement known as polygyny.

Polygynous males are most likely to be older, more experienced males that can lay claim to the best territories. They devote most of their time and attention to the first mate of the season and their young, assisting with the feeding and defense of young at other mates' nests only as time and resources permit.

Bobolinks nest on the ground in slight depressions formed at the base of a clump of grass. The nests consist of course grasses and weed stems lined with finer grasses. 3 to 7 eggs are usually laid per nest. An intriguing aspect of bobolink nesting behavior is that sometimes more than 2 adults will feed the young at a single nest.

This phenomenon, known as cooperative breeding is rare among long-distance migrants. The "extra" adult at the nest—the so-called helper—can be either male or female. Several explanations exist for this behavior. Genetic analyses have suggested that in the case of a male helper, both males present at the nest could have sired one or more of the young in the nest.

Because bobolinks have a strong tendency to return to areas where they have bred successfully or where they were reared, helpers may be offspring from the previous year of one or both of the other adults. Alternatively, they may be unrelated adults that have lost their own young and yet still have the biological urge to feed young.

After a 9 week nesting season, bobolinks typically congregate in marshes where they will undergo their post-nuptial molt before heading southward in late August. It is thought that most of the bobolinks that breed in the western U. S. and Canada head eastward to the Atlantic coast before turning southward. Migration proceeds down through Florida and across the Caribbean, with stopovers in Cuba and Jamaica.

Some bobolinks have been sighted over Bermuda on what appears to be a non-stop flight from the Atlantic coast between Nova Scotia and Virginia to South America. Upon reaching South America in October, the majority of bobolinks will spend the next two months making their way to southwestern Brazil, Paraguay and northern Argentina.

Historical fluctuations in numbers and changes in the distribution of bobolinks mirror changes in the landscape and in agricultural practices. Bobolinks originally nested in tall-grass or mixed-grass prairie of the midwestern United States and south-central Canada.

Their range spread eastward and their numbers increased as the northeastern forests were cleared, providing hayfields and meadows as nesting habitat. As "civilization" spread westward and the land was cultivated, the bobolinks followed. By 1912, bobolinks ranged across the entire northern United States and southern Canada.

The heyday for bobolinks was probably toward the end of the nineteenth century when agriculture had spread far and wide and the prevalence of horses as a form of transportation required the maintenance of extensive hayfields. Since 1900, their numbers have declined, especially in the eastern United States, due mainly to abandonment of farms, a reduction in the number of hayfields, and a shift from timothy and clover hay crops to alfalfa (not often used by bobolinks for nesting).

In addition, today's earlier and more frequent harvesting, combined with modern mowing and raking equipment, means death to many nestlings and young that have recently fledged.

We have little information on how bobolink populations are affected by changes on the South American wintering grounds. It is apparent, however, that as more land has been converted to rice production in this region, bobolinks have increasingly earned the reputation as agricultural pests.

Farmers in Argentina have tried to reduce bobolink invasions using shotguns to kill them and cannons to frighten them away. Coincidentally, bobolinks are also trapped and sold as pets in Argentina.

Ironically, whereas bobolinks are considered agricultural pests in South America, they now are considered beneficial to agriculture in the United States and Canada . This is because insects constitute the bulk of the bobolink's diet during the breeding season and most of the insects they eat are harmful to crops.

Also, at this time of the year, the majority of the plant material eaten by bobolinks consists of weed seeds or seeds of plants that are of no commercial value.

Shrinking nesting habitat and detrimental hay-cropping practices on one end of their range, combined with being shot at and trapped on the other, is making life increasingly difficult for bobolinks. Whatever name you want to call them by, or whether you're inclined to want to shoot them, eat them, or be inspired by them, bobolinks rank as champion migrants and as one of nature's extraordinary characters.